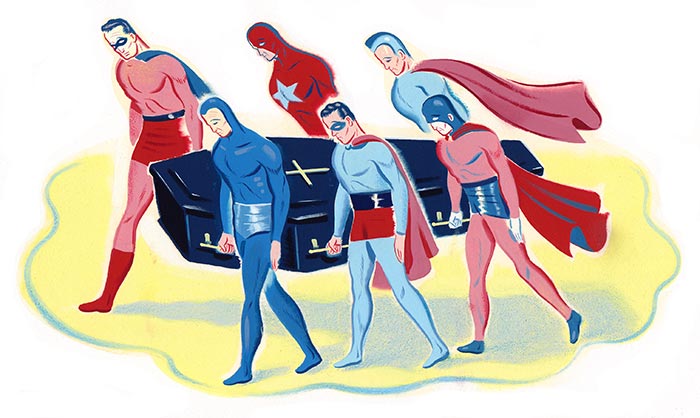 Watching the memorial service for Stompin’ Tom Connors reminded me of the public outpouring of grief that followed the Princess of Wales’s death in 1997. Diana once personified the romantic heroine of countless happy fairy tales. Her marriage to Prince Charles in 1981 was one of those “where were you when? ” moments, like the 9/11 attacks or the assassination of John F. Kennedy, although happier. The 3,500 guests at St. Paul’s Cathedral in London included much of what remained of European royalty, and a sprinkling of the world’s senior heads of state. The elaborate ceremony—the bride arrived in a horse-drawn coach wearing a dress embellished with 10,000 pearls and a train 7.6 metres long—was televised live to 750 million viewers worldwide. On this side of the Atlantic, people got up in the middle of the night to watch.

By the time she died, the fairy tale had turned grim—or was it Grimm? She and her Prince Charming separated after their well-publicized marital infidelities—Diana with her former riding instructor, James Hewitt, and friend James Gilbey; Charles with his former girlfriend and future wife, Camilla Parker Bowles. (“Well, there were three of us in this marriage,” Diana would tell a BBC interviewer, “so it was a bit crowded.”) Before the Queen (not a fan) quietly expedited their divorce, Diana entered into a two-year relationship with heart surgeon Hasnat Khan, and when that failed she began seeing playboy Dodi Al Fayed, the son of financier and Harrods proprietor Mohamed Al Fayed. Her life came to a messy end when she and Dodi died in a late-night car crash while fleeing the paparazzi in Paris.

It was no secret, as Tina Brown confirmed in a 2007 biography, that Diana was a piece of work—a sometimes malicious, calculating, media-savvy narcissist. Not exactly Paris Hilton (she did support numerous charities, after all), but not a woman of much substance either. Yet her funeral, held at Westminster Abbey, aroused even greater fond attention than her wedding had sixteen years earlier. More than a million mourners lined the funeral procession’s six-kilometre route from Kensington Palace. The celebrities in attendance included Elton John, who performed his 1973 ballad “Candle in the Wind,” the lyrics rewritten in Diana’s honour (“Goodbye, England’s rose / May you ever grow in our hearts / You were the grace that placed yourself / Where lives were torn apart”). The service was watched by an estimated 2.5 billion viewers, although some observers, including me, wondered whether this excess of mourning had less to do with Diana than with the public’s need to believe in fairy tales.

So it was with Stompin’ Tom, whose memorial in March took place not in a huge church but, as he wanted, at an arena in his adopted hometown of Peterborough, Ontario. The event was attended by thousands of fans from as far away as his native Prince Edward Island, and eight hatless RCMP pallbearers. Many tributes were delivered, including one by former governor general Adrienne Clarkson, who considered him a friend; and another by NHL goalie, author, politician, and patriot Ken Dryden, who, like other eulogists, celebrated Stompin’ Tom’s genuine bond with his audience. Canadians responded to his love of country, although it was a blind love, like that of chauvinist nonpareil Don Cherry; and to his celebration of the workingman, although the poet Al Purdy, whose death in 2000 occasioned far less public grief, did it better. What the tributes left out, of course, was that Tom was not much of a singer, as even he admitted, and that his songs were mostly unremarkable, their melodies derivative, their lyrics adolescent: “The good old hockey game / Is the best game you can name / And the best game you can name / Is the good old hockey game.”

The mythology of Stompin’ Tom is different than that of Diana; the troubadour and the princess lived on separate planets. But, as the outsized response to his death plainly showed, it’s a mythology to which Canadians are strongly attached. We need to believe, it seems, that hockey is “the best game you can name,” even though soccer, which requires as much skill, has a thousand times as many fans and is more accessible—no rink or expensive equipment required—and far less injurious. (We also need to believe, apparently, that this country still produces the game’s best players, although the evidence increasingly suggests otherwise.) Many of us cling to the outdated caricatures that animate tunes like “Bud the Spud,” “Sudbury Saturday Night,” and “The Hockey Song,” unwilling to acknowledge that Stompin’ Tom’s Canada—predominantly rural, morally certain, and inward looking—no longer exists. Comforting myths die hard.

John Macfarlane is the editor and co-publisher of The Walrus.
Ryan Heshka