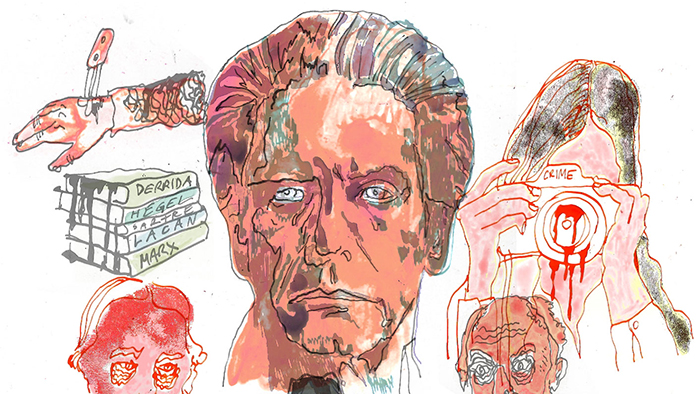 Few feature debuts in Canadian filmmaking are as casually disagreeable as David Cronenberg’s under-seen Stereo. Shot in 1968 at the Scarborough campus of the University of Toronto, the sixty-five-minute picture is as uncompromising as its brutalist setting—a black and white faux documentary about a radical psychiatric institution’s attempts to forge a new social order.

As the clinician-narrator tells us in his droning voice-over (the only sound we hear), his pilot program pairs test subjects in unorthodox sexual permutations, unlocking their latent telepathic powers. This unceremonious dispatching of monogamy and individualism is the first of many radical gestures in Cronenberg’s oeuvre, from the Freudian psychodrama of films like Dead Ringers (1988) to the more high-toned exploration of the same perversions in his recent Freud biopic, A Dangerous Method (2011). He has not mellowed with age.

The forefather of body horror still trades in anxiety-inspiring taboos about sex, violence, unusual anatomy, and the fundamental irrationality of being human. His institutional laurels suggest a more tasteful career; a 2013 Toronto International Film Festival retrospective praised his evolution from an artist interested in the existential crises of mad scientists to a more socially attuned one, turning outward to the world around him. Perhaps. Even his ostensibly better-socialized works, such as A History of Violence (2005), seem to represent a minor refinement of a determinedly impolite sensibility rather than any kind of artistic evolution. It’s telling that the Société des réalisateurs de films, which organizes the Directors’ Fortnight program at the Cannes Film Festival, recognized Cronenberg in 2006 with a prestigious Carrosse d’or, awarded to fellow filmmakers who evince audacity, independence, and intransigence in their art.

Doggedness is also what distinguishes Cronenberg’s debut novel, Consumed, a brash, at times inchoate fulfillment of a career-long preoccupation with the brave new worlds our bodies might reach if only we could surrender our prudishness. An airport mystery novel immersed in continental philosophy and media theory, it’s the kind of book you might expect from a director who has tackled heady adaptations of fiction by J. G. Ballard (Crash) and Don DeLillo (Cosmopolis).

Cronenberg divides the novel between the geographically disparate misadventures of professional rivals and lovers Nathan and Naomi, alternating between their limited perspectives as they uncover complementary halves of the mystery. Serving as our eyes and ears in this strange world of radical elective mastectomies and ideologically motivated cannibalism, Nathan and Naomi are technologically savvy freelance journalists and photographers. Their separate assignments—“You do medical…I do crime. It’s cleaner,” Naomi explains—converge in the case of Aristide Arosteguy, a French Marxist philosopher thought to be behind the apparent murder and partial consumption of his partner, Célestine.

Nathan’s expertise for weird medical stories takes him to an under-the-radar clinic in Budapest, where Hungarian quack Zoltán Molnár is performing unlicensed and unorthodox surgeries on patients like Dunja, an aging Slovenian belle who gives the journalist a rare STI. In search of a cure, Nathan decamps to the author’s familiar stomping grounds of Toronto, where he meets yet another unconventional physician (after whom his condition is named), who conducts psychological experiments on his own daughter. At the same time, Naomi sets out for Paris, pursuing the arrogant young grad student Hervé, whose extracurricular involvement with Aristide and Célestine recalls Shoah director Claude Lanzmann’s rapport with Simone de Beauvoir and Jean-Paul Sartre. When Naomi finally finds Aristide, his explanation for Célestine’s sorry posthumous state turns out to be more complicated than expected.

In recent years, Cronenberg’s early penchant for visceral horror movies about bodies in a state of disarray has given way to psychological dramas about less pronounced deviations, as with the harmlessly asymmetrical prostate keeping the hero up at night in Cosmopolis (2012). Though Consumed aligns with a newer interest in stories about everyday disorders rather than grand mutations, it is also a product of a trashy strand of popular literary fiction. In its attention to the reams of online ephemera that its amateur detectives process instantly, it seems indebted to early William Gibson; meanwhile, its obsession with the sensory bombardment of clicking cameras and glowing laptop and smart-phone screens feels like a knowing riff on Stieg Larsson’s more recent Millennium Trilogy. Though Cronenberg has not shied away from this sort of pulpy contemporaneousness before—it has an obvious antecedent in eXistenZ (1999), about a doe-eyed innocent dragged into the virtual world of a cutting-edge independent game designer—he has rarely wedded it so firmly to the mechanics of a single genre, in this case the mystery novel.

Given Cronenberg’s reputation for dourness and grotesquerie, Consumed’s overwhelmingly comic tone is even more striking. Following the 2014 Cannes debut of Maps to the Stars, a journalist suggested black comedy was a rarity for the director; taken aback, Cronenberg responded that he finds all of his films funny. While there’s a droll streak running through such images as the giant cockroach that speaks out of its anus in Naked Lunch (1991)—a gross-out effect too outré even for William S. Burroughs—it’s never been as pronounced as in the caustic irony of Consumed, which reads at times like a bemused gaze upon the foibles and vanities of the human animal. Cronenberg’s detached survey of the reporters’ increasingly unprofessional sexual investments in their subjects is especially mordant. Late in the novel, for example, Naomi refuses to turn on the camera for a Skype date with Nathan after realizing she’s become a dishevelled clone of Aristide, shedding her own skin to become an eerie doppelgänger of the man she’s ostensibly profiling from afar.

In the more structurally unhinged back half, Cronenberg proves himself a prose stylist in his own right—perhaps not the definitive heir of Franz Kafka and Jorge Luis Borges, as the American novelist and screenwriter Bruce Wagner suggests in his overzealous blurb on the jacket, but surely a decent heir of Cronenberg himself, as Wagner adds a bit more realistically. Here Cronenberg cedes the narrative to Aristide’s lunatic confession to Naomi, a Nabokovian memoir that covers his Marxist education, his paean to the resilience of insects (with shades of Humbert Humbert’s taste for lepidopterology), and his memories of his possibly murdered spouse. These reminiscences include their formative time as jurors at Cannes, where Célestine caused an uproar by awarding a prize (which Cronenberg also received for Crash) to a controversial North Korean film that she insisted held the key to the future.

Every bit the work of its maker, Consumed is best read as a return to old haunts. If it has a raison d’être, it’s this familiar but still fascinating exploration of Cronenberg’s most persistent, niggling theme: the transformation of the human form into something unpredictable, a possibility both frightening and exciting.

The motif has a heightened sense of urgency, perhaps owing to the author’s own advancing age. “I woke up one morning recently to discover that I was a seventy-year-old man,” Cronenberg mused in the Paris Review this January, commenting on the uneasy symmetry between his own bodily changes as a newly minted septuagenarian and Gregor Samsa’s infamous mutation into a beetle in Kafka’s The Metamorphosis, or Jeff Goldblum’s more tortured transfiguration into a human-housefly hybrid in his own movie The Fly (1986). Read at the time of its release as an AIDS allegory, The Fly was seen by Cronenberg as a metaphor for the uncertainties of aging. Consumed confronts those anxieties more candidly. Early on, we find Djuna taking in the sight of her tumour-riddled body and announcing, both afraid of and curious about what comes next, that her “shape is changing.” Célestine’s ultimate transformation into the star of her own artfully arrayed dying tableau is no less a response to the vulnerabilities of old age. We never know our final form, Cronenberg suggests, until the moment we’ve reached it.

Consumed shares a certain scrappiness in composition with Stereo, and one wishes at times that Cronenberg’s craft were as sophisticated as his ideas. A few of his idiosyncratic touches, such as a predilection for cataloguing the minutiae of the reporters’ camera lenses, don’t land the punch either as a satire of brand saturation or as an incisive portrayal of where we stand in relation to technology today. Naomi’s debasement to Aristide in the closing chapters, too, feels especially crude in print, divorced from the full-bodied investment of actresses like Geneviève Bujold and Jennifer Jason Leigh, who have made complicated characters out of thin conceits in Cronenberg’s films.

Still, there is a vitality to Consumed. In the posthumously published On Late Style, the literary theorist Edward Said distinguished between two major strands of artistic lateness: the mature kind, defined by its sense of reconciliation and serenity, and the more obstinate one, marked by an artist’s deliberately unproductive recitation of old ideas and overriding tendency toward “intransigence, difficulty, and unresolved contradiction.” A new-ish take on old subjects, Consumed lies somewhere in between: marvelling once again at the horrors and wonders of the flesh from the fresh vantage point of senescence while staying prurient to the end—in the spirit of the Cannes lifetime award for artistic stubbornness.

Angelo Muredda is completing a Ph.D. in Canadian fiction at the University of Toronto.
Radek Drutis