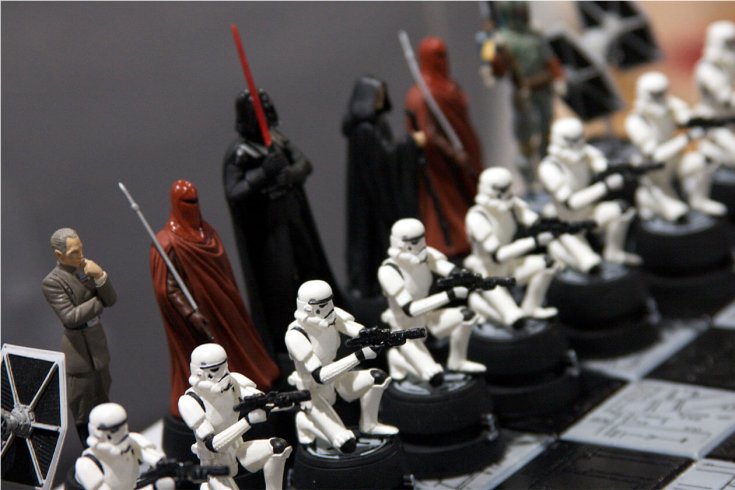 Fanboys are loathsome, as every right-thinking person is supposed to believe. Overinvested in their enthusiasms, they can’t countenance their flaws. Enthusiasms, here, means superheroes and sci-fi. But many subcultures are afflicted by some version of the fanboy. From Leafs fans to Tarantino devotees, some of us are always prepared to root for whatever product is put out on the field. Affection is a priori.

“The final Rogue One trailer dropped this morning, and it was in a word; awesome,” wrote one fan, a few months back. “Not going to mince words, but this last trailer has me more excited than I was [for] The Force Awakens. Yeah, I said it. This last trailer was the stuff of magic.” Perhaps unsurprisingly, reactions to the actual movie, now out, have been mixed. But then back in 1998, the very sight of the Lucasfilm logo at the start of the trailer for The Phantom Menace, now widely regarded as a disaster, drew the fanboy’s approval and cheers.

The fanboy’s natural orientation is rapturous anticipation, but he can also be aggrieved, even preemptively defensive. Earlier this year, many recoiled from the prospect of Rogue One’s female lead, and some Trump supporters are now boycotting the film. Fans who hadn’t yet set eyes on Batman v Superman nevertheless attacked those critics who had panned it. Critics of Suicide Squad found themselves the target of guerrilla warfare, waged under cover of the comments section. Fanboys now routinely swell the spaces below the professional critic’s byline, whose authority no longer impresses. Some rebels have even contrived to bring down the Death Star of film criticism, the reviews aggregator site Rotten Tomatoes.

Complaining about superhero movies is “the most Internet thing imaginable.”

Over the last year, critics have expended an armory’s worth of intellectual firepower on fanboy concerns, while squeezing off small, easy shots at the figure of the fanboy himself. Reviewing Suicide Squad, The New Republic sneered at “fanboy wankery.” The Chicago Tribune mocked some fanboy’s blog review by quoting from it. (“He rilly rilly liked [Suicide Squad], calling it ‘insane’…”) Even the conservative National Review, which had the poor taste to admire Batman v Superman, suggested that fanboys comprise a child-like “mob,” too immature to appreciate such sophisticated product. (My own recent piece for The Atlantic, on The Killing Joke, couldn’t resist rattling off a round.)

But it was possibly David Edelstein, writing about Suicide Squad for New York, who betrayed the reason behind all this superiority: envy. “How early will the fanboys who flock to see Suicide Squad—smug in the knowledge that they’ve won the day, that Hollywood is now desperate to cater to their tastes above all others’—admit that they’re watching the year’s most muddled piece of storytelling?”

If the fanboy has “won the day,” as Edelstein suggests, then surely one of the losers is the critic, who used to steer cultural conversations, but now enjoys far less power than the paying customer. Consider the case of Ghostbusters. After some misogynists rejected, sight unseen, Paul Feig’s all-female reboot, Hollywood appeared to panic and proposed an all-male panacea, featuring Channing Tatum.

But the rise of the angry, overindulged fanboy isn’t simply the fault of studios (which will always endeavour to sate their audiences) or social media (which often dispenses soapboxes to bad people). Critics and culture writers have also played a role in empowering the very fanboys they decry.

The fanboy has an origin story. He made his network debut on May 9, 1991, when The Simpsons introduced Jeffrey Albertson, a comic shop owner. Sometimes called “Comic Book Guy,” Albertson presented as lonely, acerbic, and overweight, bundled from behind by ponytail. He came to be supplanted by more positive representations, including the Dungeons and Dragons enthusiasts on Judd Apatow’s beloved, short-lived show Freaks and Geeks and the physicists on the popular, present-day sitcom The Big Bang Theory.

The sudden visibility of the fanboy—and fangirl—marked the culmination of a larger shift that began back in the 1970s, with the rise of the direct market and, by extension, comic shops and conventions. These spaces enabled comic collectors, Trekkies, connoisseurs of sci-fi, and other breeds of marginalized geek to assemble and find sanctuary. By the late 1980s, marketers had begun to take notice, anticipating the big-budget conventions of today—chief among them, San Diego’s annual Comic-Con, where studios screen trailers and court large concentrations of fanboy. Like my favorite comic character Tom Strong, reared in a high-gravity chamber by Victorian scientists, the fanboy is a product of social pressures. Hollywood’s scrutiny has only strengthened him.

Meanwhile, adult-oriented comics like Maus—a holocaust memoir in which Jews are represented as mice—were drawing attention from mainstream journalists and critics. Fanboy concerns found their way onto curricula, into canons. Academics like Slavoj Žižek meditated fashionably on The Matrix. Time magazine counted Watchmen, a superhero series that ran from 1986 to 1987, among the 100 best novels of all time. All of a sudden, the fanboy, once cloistered in a subculture, found himself living in a world that privileged his concerns.

But these days, as Salon’s Andrew O’Hehir has suggested, critics “can get overly invested” in “spectacles” like Suicide Squad. Everything from the latest episode of Game of Thrones to the trailer for Rogue One gets its exegesis. The murky politics of Star Wars are plumbed. Great reserves of knowledge about method acting are brought to bear on the matter of Jared Leto’s Joker. Once upon a time, the serious critic viewed comics and other fanboy concerns—narrowly, through slits in a spandex mask—as kids’ stuff. His more enlightened heirs, however, have overcorrected. They tend to assume that the slightest superhero product requires their reflection. If “hardcore fanboys” occupy “airless lairs,” to repurpose a phrase from Slate’s film critic Dana Stevens, they are nevertheless well oxygenated by the attention of a lot of very smart people.

You can argue that this is simply the state of things, that film critics have to respond to the output of Hollywood, to the movies people are talking about. But critics can be more than simply reactive arms of the culture industry. Critics can also help guide and shape taste by virtue of what they elect to write about—or don’t. “As long as we are paying attention, or at least buying tickets, the system is working to its own satisfaction,” wrote New York Times film critic A.O. Scott in his review of Batman v Superman. Sadly, Scott followed this excellent point by filing opinions about Star Trek Beyond and Suicide Squad—by continuing to pay attention! But critics could absent themselves from the “system” easily enough by electing not to file reviews of superhero movies, or to file fewer of them. They could leave the fanboy to his concerns and pursue other cultural conversations.

Yet they often don’t. Leon Weiseltier offers a hint as to why. In his review of Scott’s book Better Living Through Criticism, Weiseltier sees a critic with an “aversion to philosophical and aesthetic commitment,” a critic who refuses to make choices, who “honors the heights but gladly descends from them.” You can apply Weiseltier’s words to many of us, who no longer aspire to be prescriptive. It’s fashionable—preferable—to be seen to abhor hierarchies, to take a pass on passing judgment. Low culture, high culture—it’s all just texts, as they say in the graduate seminar, where many critics and culture writers incubate. Texts to convert into takes.

Let’s be clear: the racist trolls who chased Ghostbusters actress Leslie Jones off Twitter ought to be banished to the undersides of bridges. The dude who threatens to rape and kill a film critic for insufficiently praising a Batman movie ought to be handcuffed and hauled off. But these aren’t true fanboys. The true fanboy would have too much brand loyalty to reject Rogue One because it has a female lead. He wouldn’t boycott the movie because its screenwriter expressed an anti-Trump sentiment. The true fanboy is relatively harmless, and no more insufferable than the average person who feels moved to inflict her opinion on others’ feeds.

If anything, the fanboy’s monk-like devotion to certain artifacts and iconic characters represents a kind of aesthetic commitment that many critics and culture writers now lack. Defending films and other cultural products you haven’t experienced, of course, is silly. But fanboys are expressing a form of faith. “[T]he most iconic and popular superhero that comic book fans have never read,” says the blurb on my reissue of Miracleman. Legends breed in the lacunae of a fanboy’s knowledge. He is clerical, not critical.

In any case, he isn’t really the problem. Not too long ago, I asked Slate’s Stephen Metcalf if contemporary critics, animated by “a strain of fashionable and aggressive anti-elitism,” have become overinvested in pop culture. “We have lost the university and the popular press as automatic transmitters of unpopular culture,” he replied. “We’ve seen the giants of modernism cut down to size, as it were, because difficulty is (so it’s said) the strategy of the weak.”

Many of us have excused ourselves from the inconvenient task of reckoning with challenging works of art, and explicating them for a general audience. Plus, fanboy concerns make for such easy pickings. (As John Oliver recently observed, complaining about superhero movies is “the most Internet thing imaginable.”) But it might be time for a few of our more successful mainstream critics to own their frustrations and have the courage to abandon the superhero beat—or at least cut back on their coverage of men in tights. It might be time to plant their feet, Avengers-style, and take a stand.