Crowdfunding As a Political Weapon | The Walrus
Skip to content 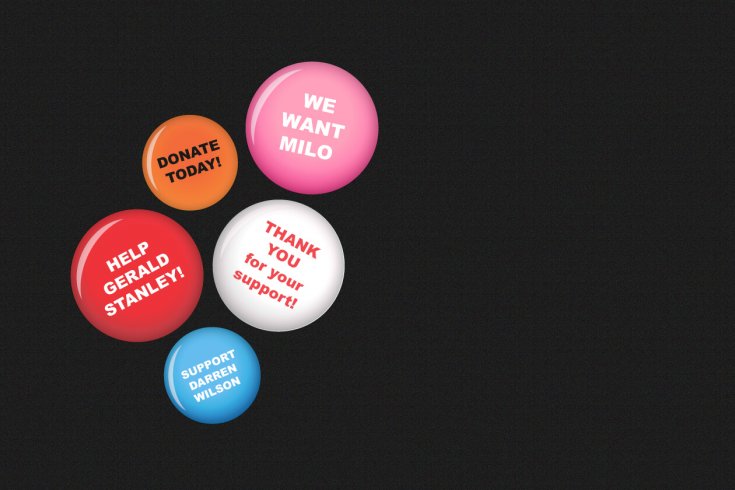 The same day a Saskatchewan jury found Gerald Stanley, a fifty-six-year-old farmer, not guilty in the death of Colten Boushie, a twenty-two-year-old Cree man, a crowdfunding campaign popped up on the website GoFundMe. The page aimed to raise money for Stanley and his family, who had, as the page’s description read, “spent thousands upon thousands of dollars surrounding this ordeal.” The donated funds would be an attempt to “help them recoup some of their lost time, property and vehicles that were damaged, harvest income, and sanity during this entire difficult situation they have been dealing with over the past two years.” Boushie’s name is not mentioned anywhere on the page.

Six days after the February 9 verdict, the fund had raised $191,000. “This campaign is trending!” read a small banner at the top of the page. Rumours circulated on Twitter that people were donating to the campaign using fake names, including those of Indigenous activists and the prime minister, and monikers like “chief red.” The total hit $223,000 before the page’s creator, a fellow Saskatchewan resident, turned off the donation function at the request of the Stanley family. “The scalp bounty never ended,” tweeted Métis author Chelsea Vowel. “Today it’s collected through @gofundme.” The corporate-accountability organization SumOfUs started a petition that called on the website to take the “shameful” page down. As of May 8, the petition had collected 14,696 signatures.

Erica Violet Lee, the creator of a GoFundMe fundraiser for Boushie’s family, tweeted that “horrifying racist comments” on the page drove her to disable public comments entirely. She started the page in September 2017, a year after Boushie’s death, and it has raised more than $200,000.

GoFundMe, launched in 2010, is “the world’s largest social fundraising platform,” according to its website. It allows people to crowdfund for various causes, including medical expenses, volunteer trips, education costs, and funerals. Campaigns are easily shareable on social media, which is why they can be so successful. Since its inception, the company has raised more than $5 billion (US). Viral campaigns often make the news. A cheery animated video on the site states: “GoFundMe makes it easy to bring your family and friends together and help the people in your life.” (The company used to make money by taking a 5 percent cut of every donation made, but it eliminated the fee late last year. Now the beneficiary of a campaign may choose to tip the site. There’s also a 2.9 percent processing fee, plus approximately 30¢, per donation, though spokesperson Rachel Hollis says this is a standard third-party fee that allows for credit-card processing.)

Crowdfunding has become so ubiquitous and socially acceptable that some fundraisers—for example, a regretful Cleveland Indians fan trying to raise money to remove his tattoo of the team’s logo or two men attempting to bring in enough cash to go to Burning Man—are clearly capitalizing on the philanthropy of strangers. Why pay for something yourself when you can get other people to pay for it instead?

The Stanley trial shone the spotlight on an entirely different way to use GoFundMe: donating money to show your support for one side of a deeply divisive issue. It demonstrated people’s willingness to voice their support for—or outrage at—the verdict via their wallets. The charged, hateful rhetoric surrounding the trial’s outcome is a marked departure from the earnest, do-gooder intentions of the website.

It’s not the first time a campaign has attracted offensive discourse. In 2014, a page raised more than $225,000 (US) for Darren Wilson, the former Ferguson, Missouri, police officer who shot and killed Michael Brown, an unarmed eighteen-year-old black man. Weeks of protests followed Brown’s death. Wilson was exonerated, and a US Department of Justice report concluded his use of force was defensible. On the GoFundMe page, people posted comments such as: “I am so sick of the blacks using every excuse in the book to loot and riot” and “We appreciate your service in the animal control division of the Ferguson police department.”

SumOfUs and the racial-justice organization Color of Change started a petition that collected more than 29,000 signatures. “This fundraiser has become a touchstone for white supremacists wanting to support Officer Wilson simply because he shot a black teenager,” it stated. On its website, Color of Change wrote that GoFundMe sent a cease-and-desist letter in response. The two groups then posted a billboard outside GoFundMe’s office in San Diego, California, that read: “DontFundHate.” Ultimately, the crowdfunding website deleted comments that violated its terms of use but did not remove the page.

The Stanley campaign, like the Wilson campaign, raised questions about GoFundMe’s terms of service, with many people wondering why the page wasn’t removed for violating one condition in particular: fundraisers may not be “in support of, or for the legal defense of alleged crimes associated with hate, violence, harassment, bullying, discrimination, terrorism, or intolerance of any kind relating to race, ethnicity, national origin, religious affiliation, sexual orientation, sex, gender or gender identity, or serious disabilities or diseases.”

“I think this is really murky territory, when we’re talking about whether or not this violates GoFundMe’s terms of service,” said Emma Pullman, campaign manager for SumOfUs, in February. “It’s so clear this [Stanley] fundraiser is being used by a lot of folks who are, quite frankly, quite racist as a kind of rallying cry.” Posts on 4chan, forums, and other corners of the internet celebrated the verdict, made offensive comments about Indigenous people, and linked to the fundraising page.

According to Hollis, the campaign didn’t violate the site’s terms of use, because Stanley was found not guilty, and the page was created once the trial ended. “It’s important to know that we take all campaigns and complaints very seriously,” Hollis writes in an email. “Additionally, we have a zero tolerance policy for hateful speech on our platform and do not condone the behaviour off the platform.

“GoFundMe has become part of the social fabric which means some campaigns will be at a point of intersection,” she continues. “This is why we are governed by our terms of service. Each decision relies on multiple considerations, including in some cases decisions made in court of law. We work closely with law enforcement agencies, regulatory authorities and the court of law for guidance.”

In accordance with the terms of service, the fundraiser for Wilson wasn’t taken down, because he was not charged with a crime. And when a campaign was launched for the six Baltimore, Maryland, police officers charged in connection with the death of twenty-five-year-old Freddie Gray in 2015, GoFundMe removed it.

The website’s policy is cut and dried, and it works because, from a purely legal standpoint, justice-system outcomes are too. But humans are fallible, so courts don’t always work as they’re supposed to: Judges can make mistakes, evidence can disappear, juries can be biased. Innocent people can go to jail. People who’ve committed crimes can be found not guilty. There’s no room in the company’s policy for miscarriages of justice—something many people feel occurred in the Stanley case.

Last year, GoFundMe came under fire for a perceived loophole in its terms. Several campaigns aimed to raise money for former Breitbart News editor Milo Yiannopoulos to speak at US college campuses. When questioned about the site’s terms—Yiannopoulos has made offensive comments about feminists, Black Lives Matter, and Muslims—a campaign organizer said the page didn’t violate them, because the money wouldn’t be used to pay Yiannopoulos, the Stranger reported. Rather, it would go toward security for the event. Altogether, the campaigns raised approximately $14,000 (US)—and this was prior to GoFundMe’s erasure of its platform fee, meaning the site took a cut. “We don’t agree with or support Mr. Yiannopoulos,” a GoFundMe spokesperson told Fast Company at the time, adding, “Campaigns created by students to cover specific costs, like security, for an event do not violate our terms.”

“From a business standpoint, it’s a profitable scenario,” wrote Ben Paynter in the same publication. “GoFundMe can both enforce their terms and allow questionable events to keep running.”

And then there’s the issue of fraud. A website called GoFraudMe compiles suspected scams, from a Michigan woman accused of pretending she had breast cancer in order to raise money for herself to a South Dakota woman charged with grand theft for allegedly keeping more than $3,000 (US) she raised for the family of a little girl who died in a car crash. After the bombing at Manchester Arena last year, multiple pages popped up on GoFundMe, purporting to be for victims. The company suspended at least two of the campaigns. And last summer, a Calgary cyclist started crowdfunding after he said he was cut in the neck by barbed wire while riding on a trail. His bike was stolen, too, he claimed, and he wanted to raise money to buy a new one, pay his medical bills, and buy surveillance cameras for trails in the park. Police investigated, said the incident—as he described it—was fabricated, and charged him with fraud under $5,000 and public mischief. GoFundMe refunded the donations.

More recently, even as thousands of donors raised more than $15 million through GoFundMe for the victims of the Humboldt Broncos bus crash and their families—the highest-earning Canadian GoFundMe campaign in history—the Better Business Bureau warned people to be wary of fake pages set up to capitalize on the tragedy. One such campaign, created by someone claiming to be Ryan Straschnitzki, a survivor of the crash, was shut down by GoFundMe. “It reminds you that there are absolute jerks out there,” Straschnitzki’s mother told Global News. “In the world that we live in, it’s not surprising. It’s disheartening, but it’s not surprising.”

This is not to say GoFundMe’s original purpose has gone to the wayside. The website is still predominantly used as intended: to show generosity, compassion, and support for others. But these recent cases have shown the site can be misused and co-opted, despite its terms of service.

People showed their values through supporting the Stanley fundraiser, said Pullman. “It’s exposed a pretty ugly side of Canada, an intolerant, racist side of Canada.” Through the page, the facts of the case were twisted to depict Stanley as the victim. And with that depiction, the GoFundMe purse grew—surpassing the fundraising total for the family of the real victim, Colten Boushie. If you were to adapt the Christian parable of the good Samaritan for modern day, a crowdfunding campaign would be started for the man lying in the ditch. Another might be started for the men who beat him up.