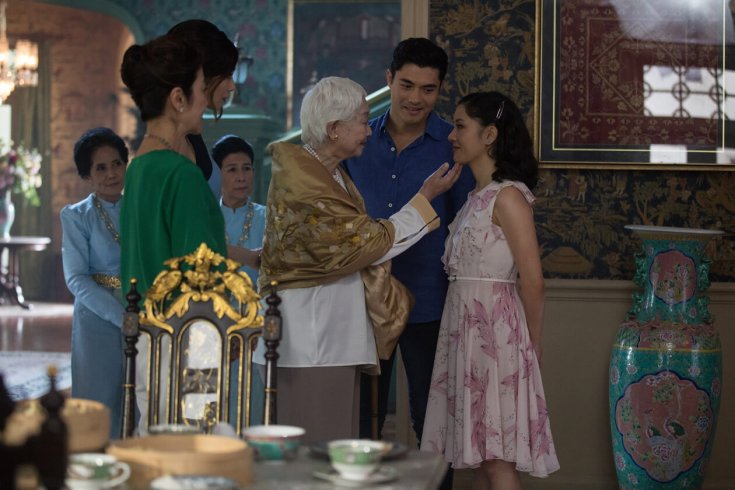 The official trailer for the film adaptation of the bestselling novel Crazy Rich Asians by Kevin Kwan features many of the hallmarks of a contemporary Hollywood romantic comedy. The movie, out on August 15, stars Henry Golding and Constance Wu as two attractive young professionals, Nicholas Young and Rachel Chu, whose relationship is tested through a series of personal differences, poor choices, and frustrating miscommunications.

Though both characters work as academics in New York—Nick is a professor of history, Rachel of economics—he is the scion of an old-money Singaporean Chinese family, while she grew up in the United States with her Chinese mother in a single-parent household. Nick invites Rachel on a trip to Singapore to attend his best friend Colin’s wedding, giving her the opportunity to meet his family and his childhood friends. But Nick doesn’t foresee the consequences of introducing his middle-class girlfriend, whom he’s been dating for more than a year, to his snobby, ultrawealthy clan in Singapore.

Much of the excitement surrounding the trailer and speculation about the film have focused on the non-white cast. It is noteworthy that Crazy Rich Asians will be the first major English-language studio film with Asian American characters featuring a primarily Asian cast since The Joy Luck Club (1993), an adaptation of Amy Tan’s seminal novel about the tumultuous relationships between Chinese immigrant mothers and their second-generation American daughters. Yet the central conflict in Kwan’s novel—and, presumably, in the movie—is not about race but rather about class differences between Rachel and Nick. (Full disclosure: I met Kevin Kwan at a dinner party in Hong Kong when the novel was first published, and we’ve been in touch ever since.)

Despite Kwan’s focus on class, issues of race and representation still clouded the making of the movie. During a public Q&A session I led in Vancouver earlier this year, Kwan shared that early on in the adaptation process, a prospective producer wanted to cast a white woman in the role of Rachel. Hollywood studios have whitewashed characters in such productions as Doctor Strange, Ghost in the Shell, Aloha, and 21, either replacing Asian characters with white ones or casting white actors to play Asian characters. (An infamous example of yellowface is Mickey Rooney as Mr. Yunioshi in the 1961 film Breakfast at Tiffany’s.) Kwan vetoed the request: Rachel does not have to come from a different ethnic background from Nick to serve as a foil to the world of dynastic Asian wealth. As a middle-class Asian American, her character is already an outsider, and for much of the book, she struggles to fit in with Nick’s family and friends.

But there is perhaps a more crucial point underpinning Kwan’s focus on class differences. As the name suggests, Crazy Rich Asians subverts the tired portrayal of Asian characters in Western literature as quiet, hardworking, forgettable, and often poor. Kwan’s characters are vocal, vibrant, memorable, and they give non-Asian audiences a view of how high society operates in some Asian nations. Through Rachel, we meet the Rockefellers and Vanderbilts of Asia, wealthy families who have run part of the world in a discreet way for generations. Crazy Rich Asians goes beyond capturing the lives of the nouveau 1 percent. Kwan takes us to see a segment of society to which we would not have access unless we were born into it.

Kwan’s novel is best described as a family drama. The Crazy Rich Asians trilogy—the second and third book are titled China Rich Girlfriend and Rich People Problems, respectively—excels in nuanced representations of the Chinese diaspora across Asia and the United States by following the Young family’s history over three generations.

Judging from the trailer, the film offers the same focus. Shots of New York and Rachel are juxtaposed with ones of Singapore and Nick, setting up a journey between west and east through cultural differences. The trailer continues with speculation, then confirmation of Nick’s family background:

Rachel: I hardly know anything about them. Every time I bring them up, Nick changes the subject.

Friend: Maybe his parents are poor and he has to send them money.

Cut to the airport, where we see a luxurious first-class lounge and a large private suite on a plane:

Rachel: So your family is rich?

Rachel: That is exactly what a super rich person would say.

As the trailer unfolds, we learn there is rich, and then there is crazy rich—each quick cut shows symbols of mad money: sleek sports cars, women dripping with jewels posing for the paparazzi, opulent homes, and private airstrips. Yet some of Kwan’s subtle eye for detail might be lost as the story plays out on the big screen. The trailer shows one character, for instance, telling Rachel that Nick’s family is involved in real estate development, a nearly universal indicator of wealth. Here, the film diverges from the novel; Kwan’s description of Nick’s background suggests the Young family’s money is old, and its origins are more mysterious.

That Nick’s family comes from old money is significant. In the books, the Youngs and their old-money friends do not associate with new-money families and definitely do not consort with the middle class (unless to give orders), which is why Nick’s relationship with Rachel is considered the scandal of the moment. This tension might be familiar to old-money families everywhere; as Tad Friend writes in his memoir Cheerful Money: Me, My Family, and the Last Days of Wasp Splendor:

This was the age-old anxiety about new money (there are Brahmin families that insist that any money made during or after the War of 1812 is new). The problem Wasps have with the nouveau riche isn’t so much the nouveau as the riche. It’s envy, felt as disapproval, of what all that unfettered money allows them to do. Old money, having received its money, treats it with custodial anxiety; new money, having earned it, believes it should be used.

The movie may still touch on the divide in Asia between old money and everyone else. The trailer shows a clip of Rachel calling Nick the “Prince William of Asia.” (“That’s ridiculous,” Nick replies. “I’m much more of a Harry.”) It’s no accident that Rachel brings up royalty. In the book’s view of Asian society, Nick is a prince and Rachel is a commoner. None of her earned accomplishments, not even a faculty position at New York University, can change her place in the social order; for Nick’s family, she was an unsuitable match from the moment of her birth. In chronicling Rachel and Nick’s troubled romance, and through various side plots, Kwan’s novel makes it clear that old money will never approve of new money or clever social climbers, no matter the latter’s level of wealth and privilege.

Perhaps the best embodiment of this clash is one of my favourite characters, the audacious Taiwanese soap-opera star Kitty Pong, whose literary foremother is Edith Wharton’s shameless social climber Undine Spragg from The Custom of the Country. Every scene Kitty appears in is deliciously comedic because she upends all the values that the old-money families hold dear. She wears a sheer dress that reveals her nipples when she meets her old-money boyfriend’s extended family. Disregarding protocol, she addresses a sultana as “your honor,” asks whether the woman’s diamond brooch is real, then follows that question with, “How many carats?” Kitty breaks the rules because she does not understand that there are rules in the first place. She makes a mockery of the strict class conventions that govern what was once called polite society; her audacity forces us to question the social rules that we follow each day without an iota of critical thought.

Though Crazy Rich Asians is not about race, Kwan doesn’t shy away from discussing racism. The opening scene of the novel (minor spoilers ahead) operates as a fantasy on several levels, revealing how class and race intersect when extreme wealth rather than poverty is at play. Set more than twenty years before the main narrative, it features a young Nick and members of his immediate and extended family who have travelled from Singapore and Hong Kong to London to accompany one of his cousins to boarding school. Once they reach their hotel, which has been owned by an aristocratic family “since the reign of George IV,” and where they have a confirmed reservation, a white manager denies them accommodations. The family discovers they have nowhere to stay in London after their long journey:

[Nick’s aunt] Felicity peered at the balding, red-faced man, the situation suddenly becoming abundantly clear. She hadn’t seen this particular brand of superior sneer since she was a child growing up in the waning days of colonial Singapore, and she thought this kind of overt racism had ceased to exist.

The reversal occurs when Felicity’s husband recalls that the hotel’s owner happens to be a golfing buddy of his—and goes on to buy the property from him over a quick phone call. In her first act as the new owner, Felicity fires the manager. In this scene, having money softens the blow of racism, delivering a vicarious moment of triumph for every person of colour who has been subjected to race-based mistreatment.

As much as I hope the movie will address these issues of class and race, I also hope it will transcend them. Last year, I watched Hidden Figures, a film about black female NASA mathematicians in 1961. I was so taken by the story, my body felt buoyant in the darkness of the theatre, bathed in the light reflecting off the screen; I had nothing to do but enjoy a history I had not known before. I was transported by the power of those pioneering black women authoring their own narratives. I cried the kind of happy tears normally reserved for weddings. I hope Crazy Rich Asians brings forth the same emotions: both films show people of colour as the heroes of their own stories rather than as one-dimensional background players.

A film does not have to be tragic like Joan Chen’s Xiu Xiu: The Sent Down Girl (1998)—a story set during the Cultural Revolution—to show us something about a culture, to reveal a bit more about the human condition. With the relentless focus on systemic injustice in Hollywood films featuring non-white lead characters, it can be easy to overlook the fact that people of colour have stories that exist outside of trauma. We can have fun, oscillating between the serious and the frivolous with ease, not too woke to laugh from the belly even if we perceive the world to be on fire. Our love stories can be a celebration of our own beauty and excellence. This joy, this escape, is what I wish to experience when I see Crazy Rich Asians.

Doretta Lau (@dorettalau) is the author of the short-story collection How Does a Single Blade of Grass Thank the Sun? She divides her time between Hong Kong and Vancouver.

Doretta Lau (@dorettalau) is the author of the short-story collection How Does a Single Blade of Grass Thank the Sun? She divides her time between Hong Kong and Vancouver.
X