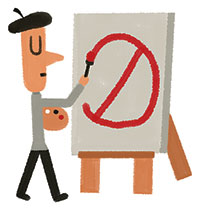 In 2008, Les éditions écosociété, a tiny Montreal publishing house, released a 348-page treatise on human rights and environmental violations by Canadian mining companies overseas. Noir Canada: Pillage, corruption, et criminalité en Afrique (Black Canada: Plundering, Corruption, and Crime in Africa) presents evidence for Barrick Gold’s alleged complicity in the deaths of fifty-two miners in Tanzania, and for Banro Corporation’s fuelling of violent conflict in the Democratic Republic of the Congo. The book, based on previously published accounts from the international press and UN reports, was intended as a study, not a bestseller. “We were expecting to sell 700 copies at $34 each,” says Elodie Comtois, écosociété’s head of communications.

Immediately after the book’s launch, Barrick Gold sued écosociété and the three authors—Alain Deneault, Delphine Abadie, and William Sacher—for a cool $5 million in damages to its reputation and $1 million for malicious intent. Banro followed suit six weeks later, citing $5 million for libel (both companies claim the allegations are false). Significantly, as this goes to press, at least one of the trials is under way in Quebec.

Two years ago, Quebec enacted legislation against SLAPPs, or strategic lawsuits against public participation. These actions are difficult and sometimes dangerous to define (just identifying a suit as such can get you sued for libel), but they often have this much in common: the plaintiff is usually a large corporation suing over defamation; and the defendants are citizens, consumers, or activists who can barely afford legal advice. “A SLAPP is fundamentally abusive,” says Normand Landry, an expert on SLAPPs at TéLUQ, l’université à distance de l’UQAM, “Both in its intentions—the plaintiffs want to quiet their political opponents—and in its judicial practice; maybe they ask for 200 experts, or ask the defendants to produce documents that are hard to obtain. The debate is no longer about whether Company X is polluting a river, but whether some activists defamed Company X by claiming it is polluting a river.” The effect is silence—even if the suit never makes it to final judgment.

It took a $5-million lawsuit by a metals company—which sued an environmental association over lost income after it stopped the unlicensed construction of a car salvage yard near the Etchemin River in eastern Quebec—to mobilize a campaign against SLAPPs. Three years and one parliamentary commission later, the Quebec National Assembly unanimously passed Bill 9, which allows judges to throw out legal proceedings they deem abusive. The defendants must file a motion proving this is so; if they cannot, then judges may force the plaintiffs to pay the defendants’ legal costs, to even the playing field. So far, Bill 9 has helped judges shut down at least four separate trials. But the Noir Canada case is the first to involve a book, and it has attracted international attention, striking a nerve with such public figures as Naomi Klein, Noam Chomsky, and Yann Martel.

The case may highlight the fact that to date Quebec remains the only Canadian province to enact anti-SLAPP legislation. In April 2001, British Columbia’s NDP enacted the Protection of Public Participation Act, but it was repealed by the provincial Liberals just five months later. In New Brunswick and Nova Scotia, private members’ bills calling for similar legislation failed to pass. Last year, an independent panel released a report to the Attorney General of Ontario that strongly supported the creation of anti-SLAPP laws, but the province has yet to act on it.

Meanwhile, other nations have surged forward. Since a landmark 2006 ruling, large for-profit companies in Australia can’t sue for defamation. In the United States, twenty-eight states have some kind of SLAPP protection, and many others are considering similar measures. California’s legislation is the most renowned; if judges find that cases have the effect of stifling public debate, they can be thrown out—and the plaintiffs can be fined.

So why is Canada so far behind? It’s all in the fine print. In the US, freedom of speech has precedence over other rights under the First Amendment. In the Canadian Charter of Rights and Freedoms, however, freedom of expression is limited by the right to protect one’s reputation. To further complicate the situation, Quebec is the sole province with its own charter that governs rights between private citizens; the federal Charter of Rights and Freedoms, by which the other provinces abide, only governs relationships between citizens and the state. Finally, SLAPPs are difficult to identify and impossible to count: Who knows how many Canadians received a threatening letter from a hotshot lawyer last year? And of all the cases that made it to court, how many were abusive? The upshot is a lack of political will; few politicians risk tackling an issue they can’t even prove exists.

In August, the Quebec Superior Court declared that Barrick’s case against Noir Canada did appear abusive, but because the book’s assertions were so damning the trial would go ahead in the fall, with Barrick Gold responsible for the defendants’ legal fees. (As of this writing, the authors are anxiously awaiting news on whether the Banro suit will be relocated from Ontario—where fewer than 100 copies of the book are circulating—to Quebec.) Regardless of the outcome, the authors have effectively been SLAPPed. “We’ve lived these suits like permanent censure,” William Sacher says. “That they even exist has obliged us to avoid expressing ourselves during public events. We’ve been constrained to a state of auto-censorship, contrary to our principles.”

The verdicts may affect all Canadians. In December, the same week the Noir Canada lawyers filed their motion for the court to declare Barrick Gold’s case abusive, Pierre Noreau, a law professor at L’Université de Montréal, published an editorial in Le Devoir. Co-signed by more than two dozen law professors from around the country, it laid out the stakes. “Behind [this case] remains a fundamental question: Can we still be critical in our society? Should power (and money) always prevail over the right to know, or at least the right to question publicly?… The future of thought rests on this case.”

A view from the other side of a SLAPP suit

In the fall of 1997, I followed my dad to court. I was on school assignment, but I also wanted to know how he had become one of the “bad guys”: the lawyer for the plaintiff in a SLAPP suit. Daishowa Inc., a multinational pulp and paper company, was seeking an injunction against Friends of the Lubicon, a group of Toronto students who had initiated a consumer boycott of the company. They had done so on behalf of the Lubicon Lake Nation, a small Cree band in northern Alberta that claimed rights to land that Daishowa was licensed to log. FOL began a letter-writing campaign aimed at Daishowa’s clients, accusing the company of genocide and of breaching agreements with the Lubicon, and asked the recipients to end their dealings with Daishowa. From 1991 to 1994, the group contacted about fifty companies, all of which eventually complied. Claiming to have lost $5 million because of FOL’s activities, Daishowa filed suit in early 1995, albeit for much less. At the trial I witnessed, FOL supporters sat cross legged in the hallway, strumming guitars. In April 1998, the court declared that their boycott was “lawful,” but that their communications had contained false statements about the company that “border on the grotesque” and thus had harmed its reputation. The court awarded Daishowa the damages it had filed for: $1.