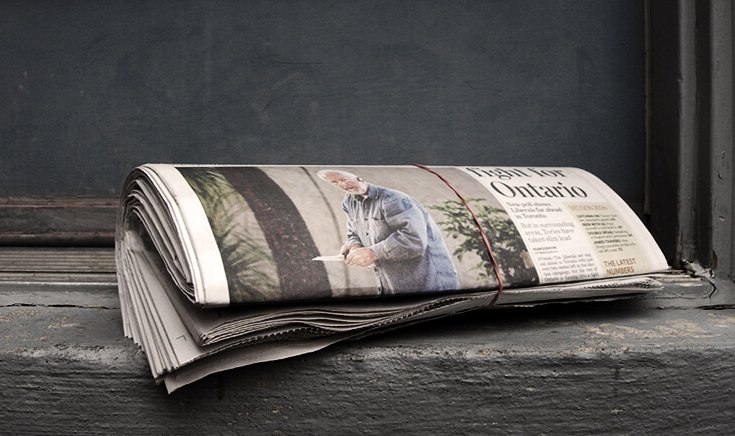 This week, my old employer, the Postmedia Network, merged newsrooms operations at cities across the country. The company, which controls almost all of Canada’s major newspapers, is $700 million in debt. Its stock is worth 15 cents per share, down 99 percent over the last five years. And with demand for print advertising dropping by about one sixth every year, it seems unlikely that the future will bring relief.

Newspapers aren’t dead: A generation from now, I believe, the New York Times and the Wall Street Journal will still be publishing paper editions. And Toronto likely will have a paper, too—likely a single merged upscale product arising from the consolidation of the National Post, Toronto Star, and Globe and Mail. But the era of the medium-sized, medium-quality daily is in its final act.

As a working journalist, I see this news primarily through the lens of employment. Lots of good people at Postmedia lost their jobs this week. Lots more will lose their jobs in the years to come. The effect will be to exacerbate what is already a fat oversupply of well-qualified journalists in the national labour pool.

More broadly, the shrinking newspaper industry means there will be fewer resources available for holding government and business to account—especially when it comes to the big, complicated investigative stories that just can’t be done by local broadcast media, or clickbait-oriented web sites.

Take the Boston-area clergy sex abuse scandal of the early 2000s, the subject of the recently released, highly acclaimed film Spotlight. As viewers learn, the full breadth of that scandal came to light only after a dedicated team of Boston Globe journalists spent months on the case. Even much smaller journalistic investigations, such as the Toronto Star’s focus on Rob Ford and Jian Ghomeshi, typically require tens or even hundreds of thousands of dollars, not to mention backup from legal counsel.

While we never can quantify how many big scandals we’re missing thanks to the ever-shrinking nature of the daily print media, there’s no doubt that crooked politicians and business leaders now face less scrutiny. I can attest from personal experience that newspaper opinion columnists and editorial writers increasingly are being instructed to lay off certain companies and industries (the ones that still pay for advertisements).

Last month, billionaire casino mogul Sheldon Adelson paid $140 million (US) for the Las Vegas Review-Journal, a staggering figure that likely exceeds the value of all four Toronto newspapers put together. This would be good news, if it were not obvious that Adelson and his proxies are intent on using their ownership stake to stifle editorial scrutiny of his business operations. The best way to make money as a newspaper owner these days, apparently, is to sell out to the folks you’re supposed to be investigating.

But amid all this media-industry doom and gloom, I hang on to one consolation: As more newspapers close, we will all finally realize that—in this era of commoditized Internet news sites—the free market alone cannot support the high-quality journalism needed to sustain an educated citizenry. For decades now, every developed nation on earth has directed public and charitable funding to support educational broadcast services (most notably, here in North America, with CBC, NPR, and PBS). It now is time to apply this same attitude to the written word.

Indeed, this shift is already happening (though more so in the United States than in Canada, where most of us still blithely expect taxpayer-funded CBC to pick up everyone else’s journalistic slack). If you don’t know the acronym NPJ—or non-profit journalism—you will soon. Prominent examples include ProPublica, a charitably funded, Pulitzer Prize-winning, New York-based organization that gives its investigative public-interest stories to news outlets for free. Mother Jones magazine is published by the non-profit Foundation for National Progress. And then there’s my own outlet here in Canada, The Walrus, which is published by the non-profit Walrus Foundation.

No, this isn’t a charitable solicitation—but it is interesting to note how The Walrus, long dismissed as fusty by some, became an early pioneer (2005, to be precise) in creating a non-profit model that increasingly will become the lynchpin of serious print and web journalism.

Which is to say, there will be plenty of mass-produced, ad-financed low-quality content to be found at the cheap, Business Insidery end of the content spectrum. And there also will be people like me and my Walrus colleagues creating quality content at the charitably financed top end. But betwixt and between—call it Postmedia-land—where the content is not quite good enough to attract donations from high-minded donors, nor vulgar enough to qualify as viral clickbait, the business model has evaporated.

In the modern media market, go low, or go high. Hanging out in the middle of the road will put you on the path to corporate extinction.