Calm in the Storm | The Walrus
Skip to content 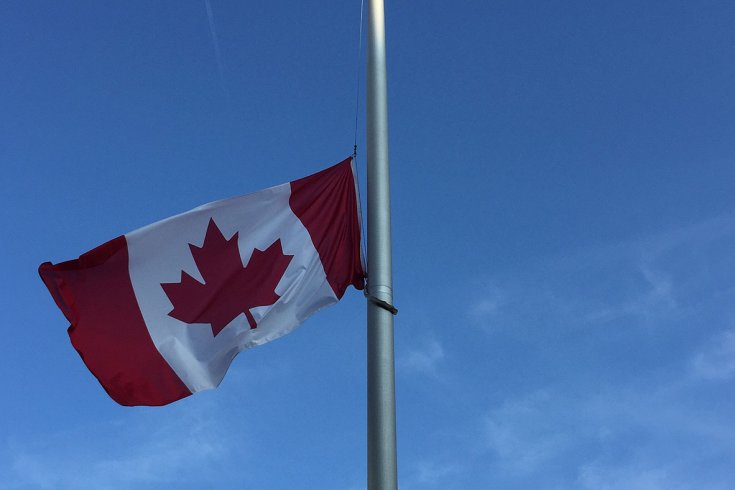 Shortly after 10 a.m. last Wednesday morning, I was heading back to my office from a meeting at a nearby coffee shop. The walk is only 100 feet from door to door. Because I’ve been conditioned by the conveniences of modern technology to fill even the briefest intervals with digital stimulus, I pulled out my smartphone and punched in my passcode.

A missed call from my wife.

A text message asking where I was.

An inbox full of new messages.

My screen displayed the first line of every email, so I quickly got the gist: gunman, loose, downtown, get inside.

I didn’t look up until I reached our building (I have been conditioned, too, to navigate complex urban environments without watching where I’m going). When I finally lifted my head, I saw a young guy standing near the door, watching me. He was one of those aimless downtown kids whose demeanour and attire make it hard to tell whether they’re homeless and drug-addled or just incredibly stylish. For a split-second I wondered why he had one hand so deep in his coat pocket. But by the time my imagination had worked up a vision of gun being drawn and pointed in my direction, he’d already disappeared around the corner.

I unlocked the back door and went upstairs.

The century-old stone building where I work is a block east and a half-block north of the National War Memorial on Wellington Street. In its previous lives, the building has been home to a geological survey, a hospital, and a museum. It is now an advertising agency. The creative studio on the second floor, where I sit in formation with twenty or so colleagues, is long and narrow and loft-like. Tall windows look onto the street below; cool music perpetually plays; cool people constantly mingle around the water cooler.

I was met with exactly this scene when I entered: everyone slouched at their desks, headphones on, deep in their work (or deep in avoidance of their work). The usual tedium of a busy midweek morning.

It seemed there was nothing to worry about.

Still, I sat down at my desk and logged into Twitter to find out what was going on. What I learned: there had been a shooting at the War Memorial; a shooting on Parliament Hill; the location of the assailant(s) was unknown. As I scrolled through my feed, I opened a separate browser window to stream the live news coverage on cbc.ca. Even as the MPs and journalists barricaded inside the Parliament buildings tweeted live updates, nothing was to be believed until I heard it come out of Peter Mansbridge’s mouth.

I called my wife (a parliamentary clerk who, thankfully, is home on maternity leave) to tell her I was okay. Next, to mitigate the flood of concerned messages from friends and family, I did a garish thing and posted an update on Facebook telling everyone I was safe and unharmed (garish because it seemed an effort to put myself in the middle of something I was adjacent to).

Just then, the metal garage door in the reception area began to rumble shut. Some of us rumbled, too. Groans, sighs. Is this really necessary? A senior manager came into the studio and asked us to draw the blinds on the windows. All doors leading outside have been locked, he told us. He asked that no one leave the building. A few heads bobbed in agreement. Others didn’t hear—their headphones were still buzzing.

Over the next few hours, there was a surge of information online. Reports of multiple shooters, one of them weaving through the streets on a motorcycle. Rumours of gunfire at the acropolis-like Château Laurier, a stone’s throw from our front door. Rumours of gunfire inside the Rideau Centre, too—the whole shopping complex was shuttered, a suspect trapped inside, possibly with hostages. And these weren’t the hysterical shouts of confused witnesses or internet trolls; some of these reports came from the Ottawa Police, from CTV News. Avoiding the office windows suddenly didn’t seem such an alarmist request.

The workday continued. Project managers and media planners strolled through the studio carrying their MacBook Airs and mugs of coffee. Art directors hovered over junior designers, tweaking colour values, correcting kerning errors. Emails continued to fill my inbox—subject lines like “Logo design meeting rescheduled” and “New draft of messaging doc” interspersed with updates about what was taking place in the streets outside.

Were we treating the situation too frivolously? Was it disrespectful to those injured and in danger to keep calm and carry on like we did?

In truth, our response had less to do with old school, stiff-upper-lip stoicism than it did with awareness. We knew what was happening when it was happening. The immediacy of the news that was available to us online—whether in crude (Twitter) or refined (Mansbridge) form—extinguished our panic before it ever ignited.

At times, we were magically able to witness events from multiple perspectives simultaneously. When a tweet claimed that the intersection at Sussex and Rideau was being cleared by police, I broke emergency protocol and peeked past the drawn blinds: a crowd of onlookers was indeed scattering north past our building. I could hear faraway voices barking orders. At that very moment, another tweet popped up: a picture of the scene I was concurrently watching, but photographed from the opposite angle. The sheer amplitude of information was akin to downloading psychic superpowers.

But while this God’s-eye view brought us closer to developing events, it revealed a certain distance, too. We monitored the news in solitude, communing quietly with our web browsers and smartphones. Though we were only blocks away from the action, and trapped in our building, we experienced the event in much the same way as millions of others across the country and around the world: one package of data at a time. Throughout the day, as the situation outside got progressively scarier, we didn’t talk much about it. We didn’t need to. We knew what there was to know. Most importantly, that our spouses and loved ones were okay too.

At noon, the brown-baggers generously offered their food for those who hadn’t brought a lunch. Every package of stale almonds, every secret sleeve of crackers, every emergency stash of candy, every leftover bottle of beer and can of soda from office parties past and present—it was all laid out on the kitchen table, a sort of lockdown buffet. The lunch room, like it does most days, filled with chatter and laughter. A pregnant colleague spooned ice cream from a Pantone mug. Another called dibs on the can of smoked oysters. Someone complained that the dishwasher had been poorly loaded.

Would the day have unfolded like this if we hadn’t had access to Reddit, Twitter, the CBC, or live updates on newspaper websites? There were other places to get information, sure, but the only thing we learned from the police officers patrolling outside our building was, yes, the lockdown was still in effect. (Now get back inside.) Even less was revealed during the mid-afternoon press conference held by the authorities, in which they couldn’t even assure us that there were no more madmen prowling the streets.

Without our devices, our data plans, our social networks, would we have known that we were on the immediate periphery of this perilous situation? Or would we have known just enough (that a killer was on the loose) to be in hysteria, huddled together in the windowless recording studio on the third floor?

The only time I felt real fear that day was the moment when I looked up from my phone to see that strange kid staring at me. A flutter in the chest, a clench in the guts. A spasm of hysterical fantasy. He was, of course, an innocent bystander, just like me. And perhaps in even greater danger (after all, I had access to shelter).

It wasn’t callousness detachment that greeted me when I came upstairs to find everyone working away like nothing was happening. It was proof that social media and our traditional news institutions had collaborated to do precisely what the fourth and fifth estates are meant to do: inform, enlighten, protect.

The grief, the outrage, the pride, the deep reflection—all of that would come later. But in the middle of the storm, the best thing for us to do was not be afraid.