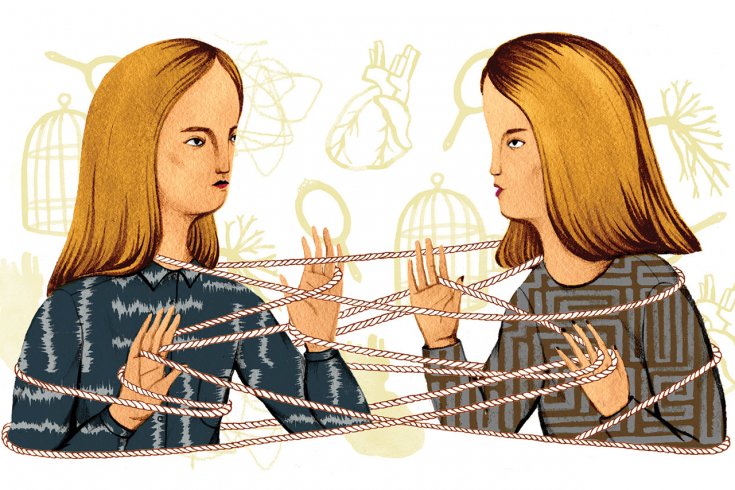 The Girl Who Was Saturday Night
Heather O’Neill

All My Puny Sorrows
Miriam Toews

For Noushcka, the ambitious, downtrodden heroine of The Girl Who Was Saturday Night, the idea of love has always been suspect. When her sweet yet disturbed boyfriend, Raphaël, proposes with a mood ring pulled from a cardboard box, she reflects, “Sometimes I was so afraid of love. It gave you the feeling you had when you were shoplifting and you were walking out of the store with something concealed under your jacket.”

In her gritty second novel, Heather O’Neill returns to the dark urban terrain of her highly regarded debut, Lullabies for Little Criminals, to chronicle the unconventional coming of age of Noushcka Tremblay and her twin, Nicolas, and to explore how love, in all its forms, can be suspect and ill intentioned. A famous, absent father and a missing mother leave the siblings to grow up in a small ramshackle apartment with their aging, oblivious grandfather. Without parental attention, they become self-sufficient and rebellious, unconcerned with the future, and filled with suspicion toward whatever is offered to them.

As former child celebrities, Noushcka and Nicolas are also victims of the false affections of fame, attention that only serves to annoy, and to sabotage their hopes for success. They appear in the gossip pages, and the paparazzi root through the garbage to unearth the details of their lives. Welded together by a love they never received from adults, they believe in nothing but each other, making it difficult for them to move forward or apart.

In both of her novels, O’Neill examines how girls valiantly struggle free from a love that breeds dependence. Noushcka bravely tries to escape her impoverished St. Laurent Boulevard life, and to crawl out of her Québécois folksinger father’s shadow. She enrols in night school and stumbles into the role of beauty queen in the local Saint-Jean-Baptiste Day parade, her first steps toward coming into her own.

Nicolas can’t let go of his sister as she threatens to outpace him. While her success in school finally makes her feel as if a future is opening up, her brother’s need to hold on treads into the arena of possessive abuse. When he tells her that he has found their missing mother, the strained impromptu reunion exacerbates the twins’ dysfunctional dynamic: Noushcka feels betrayed that he did not reveal their mother’s whereabouts sooner, and the event reads as a fraught attempt by Nicolas to keep his sister where she is.

The novel brilliantly transforms the ugly into something startlingly beautiful, converting gritty Montreal into a magical world, bursting with amusing and absurdist imagery. A stray cat lounging on a bed, or sex workers dining in a grimy Chinese restaurant, all become transcendent tableaux in the author’s glittering world. She applies the same skill to expanding the limited ways in which we look at intimacy. Those relationships we see as “ugly” suddenly become beautiful and admirable under her gaze.

O’Neill is known for narratives that dispute young women being victimized by their desires. Before Noushcka’s engagement to Raphaël, she has a fleeting sexual relationship with a much older man that should be discomfiting and exploitive, but instead is one of the novel’s more tender trysts. The physically grotesque Misha makes Noushcka feel like “the prettiest person in the world,” and because of his deep paternal love for her—one that works in contrast to Nicolas’s—he eventually releases her, in the interest of seeing her grow. Here, sex with Misha functions as a tool of agency and solace for Noushcka, an escape from her family, a place where she feels powerful and in control. Her ingrained mistrust of love means that sex and its potentially nefarious motivations fail to frighten her.

“Sometimes you don’t realize that love is love,” she reflects after one sexual encounter with Misha. “You think it must be nobler. You think it must involve someone better looking.” O’Neill’s characters don’t know what love looks like, but they constantly seek it out, fumbling with its possibilities on the way to defining it for themselves.

The complexity and intensity of sibling love is the subject of another spring release, All My Puny Sorrows, this time told from the perspective of the sibling who doesn’t want to let go. Giller-shortlisted author Miriam Toews narrates the story of the beautiful Elfrieda through the voice of her sister, Yolandi. Elf is an archetypal troubled talent, a gifted pianist born into a Mennonite community (much like Toews’s own native Steinbach, Manitoba), and the climate of her upbringing discourages creative exploration, under the concern that “she’ll get ideas.” This is not the first time Toews has examined the idea that misguided love breeds oppression. Her third novel, A Complicated Kindness, documented the defiant Nomi Nickel, a sixteen-year-old dreamer who rebels against her own Mennonite upbringing; and her second-last book, Irma Voth, looked at well-intentioned religious communities’ power to limit personal freedom.

In Elf’s struggle to be free, her parents relent, governed by a fear (and a doctor’s recommendation) that if she doesn’t find an artistic outlet she will become “wild.” She manages to wriggle out of the hold of authority, thanks to her artistic gift, but her troubled mind compromises her success as a world-renowned musician. Yoli’s love is the one constant, grounding Elf through suicide attempts and subsequent hospitalizations.

An impoverished, struggling writer, Yoli carries around her manuscript in a plastic bag; in the eyes of the world, she is the failure to Elf’s perceived success. Soon to be divorced, she sleeps with a string of questionable men, and she jokes that Elf has a marriage without a husband, while she has a husband without a marriage.

When Elf is hospitalized for another botched suicide, her sister relays an anecdote about a tattoo she has removed, one she and her husband had done by a Manitoba biker when they first got together: “I told her I’d paid him twenty bucks and a bag of weed to get the tattoo and that I had to pay a thousand dollars to have it removed, and that it would take at least a year and a half.” The story, told to distract Elf from her disintegrating mental health, is a tidy metaphor for how easy it can be to fall into the perils of love but how difficult it is to escape them. “I wanted Elf to stay,” observes Yoli. “Everyone in the whole world was fighting with somebody to stay. When Richard Bach wrote ‘If you love someone, set them free’ he can’t have been directing his advice at human beings.”

Love and freedom complicate each other in both novels. Elf asks Yoli to travel with her to Switzerland to help her die, and when her sister refuses she asks, “Do you love me? ” The question highlights love’s core selfishness. Later, sitting in her car and gripping the steering wheel, Yoli searches for an answer: “What is love? How do I love her? ” Ultimately, she comes to understand that the thing she fears most is life without her sister. She is afraid to be alone.

For Nicolas, abandoned by his parents and unable to see his own son because he can’t support him financially, love is a zero sum game. On Noushcka’s wedding day, the day her fragmented family must release her and wish her well, he acts like a petulant child, aggressive toward her new husband and dismissive of their union. “I could tell he was feeling unloved,” Noushcka observes. Her success and happiness represent his loss, and he is incapable of sharing her joy: “Nicolas wanted to be my most favourite human being,” she thinks.

“Nicolas and I were afraid to be without each other,” she admits. “And whenever you are dependent on someone, then you naturally start to resent them. Everyone is born with an inkling, a desire to be free. We had tried all the other crazy, violent things that other people did to end their relationships. We had humiliated and belittled and smacked one another. But nothing ever worked.”

Both O’Neill and Toews are interested in the blurred line between affection and possession, how love can be self-serving, and how our regard for another can lead to suffering. Noushcka is not free to live, just as the tormented Elfrieda is not free to die.

Even in its most constraining forms, love is the very thing that defines us and makes us feel alive. The embattled Noushcka readily accepts this inevitability: “I felt a rush of blood through my heart. I didn’t know whether the feeling was love or whether it was the excitement you feel when you are doing something you know is stupid but you are doing it anyways.” Love is not a conscious choice for either Noushcka or Yolandi; it is unavoidable, and thankfully so.