Birthright | The Walrus
Skip to content
Is giving young Jews a taste of the homeland the best way to save Judaism?

The sun had not yet risen when we filed off the bus and stood in the frigid Judean desert, awaiting instruction on our first “values classification exercise.” Guy Bar-Yosef, an Israeli guide subcontracted by Taglit-Birthright Israel to shepherd groups of young Diaspora Jews like ours through the ancestral homeland, gestured at the ancient fortifications of Masada atop a dark bluff in front of us. As we scrambled up the path toward them, he told us Masada’s legend—another one of Jewish death. Our ancestors had fled the Romans this time, living in the clifftop bastion for several years as their enemies gathered below. It was only a matter of time. When the Romans finally attacked, there was nowhere to go. So they closed their eyes and jumped.

Inside Masada’s crumbling walls, we posed for a group photo. Then we wandered past the ruins of bathhouses and temples to the lip of a bottomless canyon where almost 1,000 Jews are said to have died. Leaning on a railing, Guy told us to repeat after him: “Shenit.” (Shenit!) “Metsada.” (Metsada!) “Lo.” (Lo!) “Tipol.” (Tipol!) Each time, the words chorused back from the chasm. We looked at one another blankly. “Masada shall never fall again,” Guy translated. “Now say, ‘Am Israel hai.’” Am Israel hai! we cried, and again the echo seemed to channel voices thousands of years old. They chanted, “The people of Israel live!”

Charles Bronfman—businessman and heir to the Seagram fortune—and his American partner, Michael Steinhardt, could hardly have imagined a better initiation when they founded Birthright ten years ago. Certainly, values classification exercises like Guy’s are part of the reason the international non-profit is one of the more successful community building initiatives launched in response to a millennial identity crisis. The first waves of panic swept through the community in 1990, when reports made the rounds that in the previous twenty years the proportion of Jews in the US had fallen by almost half, while just over half of American Jews were marrying outside the faith. Jewish identity, in other words, was teetering on the edge, and everyone suspected modern pluralism was to blame. 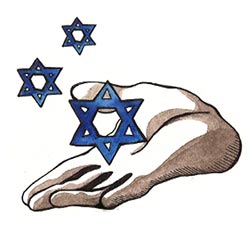 “I found myself in a Bedouin tent in the desert, looking both at the many Jews close to me and the sand and the stars that seemed to go on forever. And I felt very seriously—in fact, I knew—why I was given tradition.”—Anna Kamerow

“Everyone should go to Israel, I did everything I wanted to and more with this incredible opportunity! I learned so much about myself and my Jewish identity on my Mayanot trip (I love you bus 16!). This was the best spent 10 days of my life… I will cherish this feeling and the memories for as long as I live and will pass it on… I am more proud of myself and my Judaism than ever before!”—Nicole Azarian

“Today Jewish people are accepted into society,” explains Michael Soberman, director of Canada Israel Experience, the country’s largest organizer of Birthright trips. “On the one hand, that’s a very positive step. On the other hand, it faces us with a challenge.” Birthright CEO Gidi Mark is less politic in his interpretation of demographic trends, suggesting that assimilation is a bigger threat to Jews than anti-Semitism. But Guy, the only person who showed up for the tour wearing a kippa, or skullcap, takes the prize for frankness: “Assimilation is the Holocaust of this generation,” he would write to me after I returned from Israel feeling manhandled.

When I and forty or so other Canadian kids lucky enough to have won a free trip to Israel arrived at Ben Gurion International Airport in Tel Aviv, an Israeli Birthright representative was there to meet us. We could breathe easy now, he told us; we were finally in the majority. Here, we could even wish people on the street a good Shabbos. The group seemed excited. But then we’d had little sleep. “Welcome home!” he’d cried emphatically, and everyone had clapped.

Later, in an austere kibbutz meeting room, we noisily dragged our chairs into a circle and listened as Josh, a Birthright leader from Winnipeg, recounted his story of intolerance. “Have any of you experienced something similar? ” he asked afterward. (One girl shared that she’d once been called “cheap.”) And hadn’t we noticed how much safer we felt now, surrounded by other Jews? Talk then turned to our people’s many accomplishments: we represented less than 1 percent of the world’s population, yet we held important offices in all areas of public life. We were great, we were hated, we were few, we were scattered. If we didn’t stick together, we’d be lost.

It was a far cry from the “tossed salad” paradigm pushed in Canada, and apparently more potent. Sitting in our final sharing circle in the meeting room of the Moriah Gardens Hotel in Jerusalem, my peers teared up, even sobbed, as they spoke of feeling “at ease” in Israel and falling “in love with the country,” which we had seen largely through the windows of a speeding bus. One girl identified Israel as a symbol of “the hope that we share to be free.” Many now wore Star of David pendants or kippot. The previous night, we had even witnessed a kind of conversion. After Michael Soberman spoke about his one true hope—that his young daughter would grow up to be a dedicated Jew—we were told that one of us wanted to address the group. An Ottawan in sensible outerwear stood at the podium and explained that because there hadn’t been many Jews where she grew up, her Jewish identity had confused and mostly eluded her. But now, in Israel, she knew what she was. The feeling had taken her off guard, but she was sure it would last.

And she was probably right. Successive follow-up studies show that the majority of Birthright’s 215,000 past participants—including 28 percent of Canadian Jews born in one of the surveyed cohorts—are more likely to feel an attachment to the Jewish people and to their own Jewish identity, and are more committed to raising Jewish children, than those who apply for Birthright trips but don’t go. And these results ensure that philanthropists keep giving in order to reproduce them. Las Vegas hotel and casino magnate Sheldon Adelson, for example, has donated $80 million (US) to the charity over the past three years (his latest contribution allaying fears that the recession had tapped him out). The Israeli government is also a big investor, though its interest may lie more in the $400 million (US) and counting represented by Birthright tourism, as well as in the building of international support for the Jewish state.

In any case, when Adelson made one of his early donations, he repeated a familiar refrain, calling Birthright “one of the best ideas our time has seen, because it has the greatest potential to maintain Jewish continuity in the face of growing assimilation.” But what exactly does “Jewish continuity” mean in this context? Birthright is not, after all, a religious project; this would run the risk of alienating potential affiliates or, as Soberman put it, “speak only to a very narrow portion of our clientele.” When I eventually realized that my discomfort with Birthright’s means was rooted in my uncertainty about its ends, I wrote to Guy to ask what he thought the point of preserving non-Jewish Jews might be. “In my opinion, there is no Judaism without religion,” he responded. “If we’ll take G-D and the Torah aside for a split of a second, then what remains? ” Not a very Birthright-appropriate line, but I was inclined to agree with him. Then again, the question of what constitutes Judaism will never be answered if there are no Jews left to ask it.