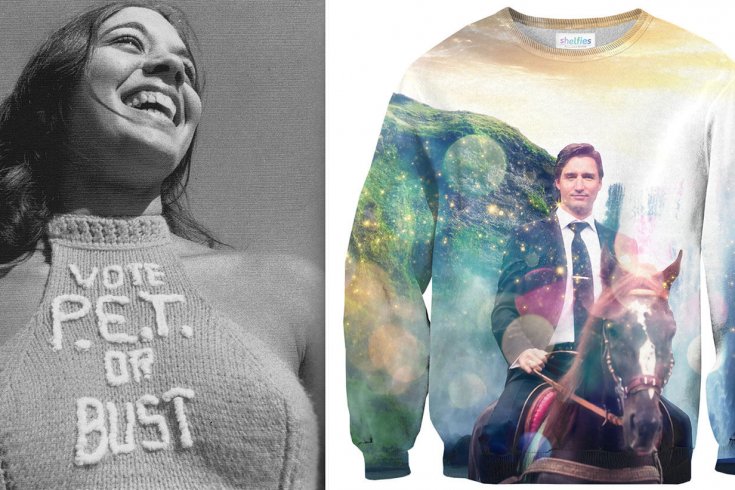 If you want the “Dreamy Trudeau” sweater for Christmas, you’re probably out of luck. The Toronto manufacturers sold out within days and there’s already an extensive waiting list for the pullover, which depicts Justin with a wry smile in a dark suit riding a dappled horse over a cosmic nature landscape reminiscent of Led Zeppelin album cover art. Shelfies have found a market for what everybody—from New York magazine to the Philippine journalists who coined the term #APEChottie—recently discovered. Canadian politics, even in sweater form, is sexy again.

Sexy Trudeau sweaters are a traditional Canadian genre at this point. “Dreamy Trudeau” is highly reminiscent, at least to me, of an iconic image from the first Trudeaumania. A young woman, shot from below, displays the message “P.E.T. or Bust” on her chest. Trudeaumania coincided neatly with the sexual revolution, and the sweater stood right on the cusp of that revolution, with its gentle hint at “petting” and the antiquated reference to “bust.” The fact that it was handmade is essential to its peculiar charm. That sweater occupied the strange middle ground, a truly brief window in time, in which women who displayed their breasts for political purposes also knitted.

Pierre Trudeau was the pure embodiment of that strange sexual dawn, both politically and biographically. “There’s no place for the state in the bedrooms of the nation.” But the nation was certainly interested in the bedroom of the state while he slept in it. Kim Cattrall—Samantha herself—described him as “so incredibly sexy.” Why was he so incredibly sexy? In a review of one of his biographies, Margaret Wente offered the following explanation, which may be the most understated and damning evisceration of Canadian masculinity ever written. “Mr. Trudeau’s attentiveness to women was central to his charm. He listened to them.” Apparently in the seventies that was all it took to be the greatest lover in the country. He actually, if you can believe it, and I’m not kidding, listened to them. As if women were people or something.

The “Dreamy Trudeau” sweater has a different sexual aesthetic, coming, as it does, after the Pill, after AIDS, and after Internet pornography. Justin has never been shy about using sex for political purposes. Way back in 2011, during his Musketeer beard phase, he was performing stripteases at Ottawa fundraisers. In 2013, a columnist at Vice wrote “My pussy quivers for Justin’s profound desire, and failure, to be cool.” During the last election, Sluts Against Harper agreed to send naked pictures of themselves to anyone who could prove they voted to oust the former prime minister—homemade pornography for a cause. Wattpad already has a Justin Trudeau fanfic page. Sexual fantasies of Justin Trudeau are available in every form right now.

Obviously, the catastrophic Conservative campaign of the last election made a huge miscalculation in attempting to diminish Trudeau by sexualizing him. The blunder began when Ezra Levant called Pierre a slut but it ended when Stephen Harper tried to connect the Liberals to the opening of brothels. Neither of these men realized that one of the main attractions of the Trudeau family as a political dynasty is, exactly, their liberal sexuality. The Conservatives did Trudeau’s work for him.

The question is why this connection between sexuality and the Prime Minister’s office only works with people whose last name is Trudeau. The rest of the time, even with other Liberal prime ministers, Canadian politics is rigorously asexual. The incredibly few sex scandals in the history of Canadian politics are usually minor or revealed well after the fact.

You have to do something really dumb to be caught in a sex scandal as a Canadian politician—like using a government car to bring a prostitute to a motel or paying with a credit card at an escort agency. Even then, the consequences are mostly negligible. Francis Fox, Pierre Trudeau’s solicitor general, had to admit in 1978 that he had arranged an abortion for a former mistress, but that didn’t stop him from rejoining cabinet and later the Senate.

The absence of Ottawa sex scandals should not be taken as an absence of scandalous sex in Ottawa. The Munsinger Affair—in which a prostitute spy slept with several cabinet members including the associate minister of defence—was a well-kept secret for years. The peculiar reticence about sexual scandal in Canadian politics is one of the oddest and most defining features of the Ottawa scene. “It is nobody’s business but theirs” is the dominating sentiment. The public and the media just don’t seem to care, or rather strenuously assert that they don’t care while peeking through their fingers. Where does the reticence come from? It’s not British reserve. England loves political sex scandals. It’s not American influence either. The United States lives for Oval Office blowjobs and gubernatorial dick pics. The prurience of Canadian observation is entirely our own.

Canadian political prurience produces monstrous visions in secret like all forms of repression. The sexual rumours about the most recent Conservative government were incredible. I mean that literally; they could not be believed. Everyone knew about the lesbian Mounties and the Tel Aviv rent boys, but rule No. 2 of Wells’s Rules of Canadian politics applied perfectly: “If everyone in Ottawa knows something, it’s not true.” The rumours were an obvious case of wish fulfillment; if only there had been that kind of joy in the corridors of power over the past nine years.

In this context of a mingled worship of privacy with intense submerged fascination, the sex appeal of the Trudeaus is quite simple: Unlike every other Canadian politician, they acknowledge that they are sexual. And therefore they appear healthy and open while the others appear dark and furtive.

Which is why a sweater is the perfect place for Trudeau-esque sexuality—wholesome while being eccentrically Canadian. I have always wondered about the “P.E.T. or Bust” number, why anyone would knit a sweater without arms. Surely that defeats the purpose? At least the “Dreamy Trudeau” sweater looks like it might keep you warm. But of course warmth is not really the point. Hotness is. Only in Canada can a sweater be lingerie.