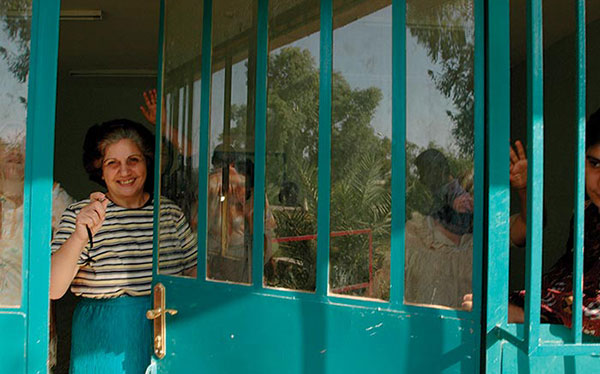 In the months leading up to the election, Iraq was on fire. The ground shook and the sky darkened with smoke. In Baghdad, the streets were deserted, storefronts shut. Masked insurgents toting ak-47s buried explosives under the asphalt. Fundamentalist militants bombed liquor stores and hair salons. Kidnappings plagued the country. Women donned veils out of fear, and honour killings returned, allowing men to murder sisters, mothers, daughters, or wives for acts of perceived disobedience. The violence spilled right up to the gates of Baghdad’s largest psychiatric hospital, al Rashad. Inside the walled compound, there was an illusion of safety, where staff and patients could hear the explosions, but could not see the fierce battles raging outside. Al Rashad is home to 900 patients, 300 of them women, many of whom are schizophrenic. Isolated by mental illness, they come here from all over Iraq: Sunnis, Shiites, Christians, Arabs, Turkomans, and Kurds. In a country divided, they’ve found community. For nearly six months and over some twenty visits to al Rashad, I was drawn to these women, lonely and abandoned, many of them simply dropped off at the hospital like unwanted goods. Sometimes, I heard their hopes of leaving the hospital, of getting married, being reunited with families, husbands, and children. Most have lived at al Rashad for years, losing track of time and the outside world, as the old Iraq slips away under the burdens of conflict.