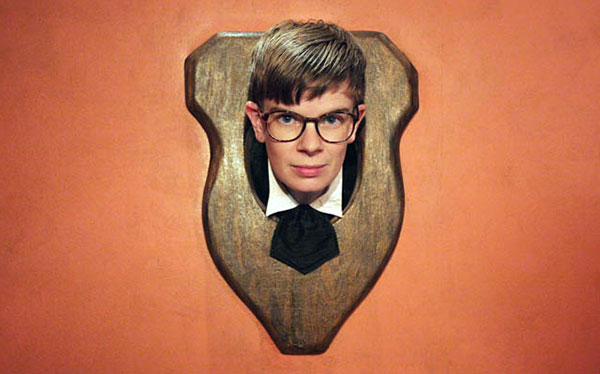 Canada’s representation at this year’s Sundance Film Festival comes in the form of an unusual, melancholic music documentary. My Prairie Home, produced by the NFB, is a sad and sweet look at the life of transgendered indie-country star Rae Spoon.

The film follows Spoon, who resides in queer-friendly Montreal, on a tour across the Prairies, the same terrain where they (Spoon prefers the third-person pronoun) were raised in an evangelical family, and developed their performance chops in hostile country bars. Spoon travels vistas sparse enough to encourage deep introspection—an effect that is strengthened by director Chelsea McMullan’s occasional digressions into dream-like music video interludes.

Spoon, a pleading and vulnerable singer, has a reputation for being a little circumspect in interviews. To get them to open up for the camera, McMullan had Spoon write out anecdotes from their past. Those short stories became the film’s narration, and found life outside the documentary as a book, First Spring Grass Fire, which was released to acclaim in 2012.

Chris Berube: Chelsea, how did you come to do this film with Rae?

Chelsea McMullan: We knew each other, and had probably known each other for a year. We had been collaborating together on a film for which Rae was doing the score. We were becoming friends over that, so I had the idea (for My Prairie Home) and pitched it to them.

Rae Spoon: It started with us wanting to make music videos together. We started talking about the music industry in general, and we got into the story of the previous ten years and how unmarketable it is to be trans in the music industry.

Chris Berube: Chelsea, the cinematography in your film is very beautiful. It feels like you took a lot of pleasure in shooting these landscapes.

Chelsea McMullan: I always try to use the landscape as a way to represent the psychological state of the character. Where we grew up and where we choose to live reflects a lot on who we are. I think it’s important to represent that in documentary. Rae and I filmed (a music video) together in Venice, which is pretty much the opposite of the Prairies. I thought it would be so easy to film in Venice, but its beauty is an over-stimulus. Whereas in the Prairies it’s so easy. There’s one thing for miles. You frame it up, and it says a lot.

Chris Berube: Rae, you recently wrote a piece for The Huffington Post that describes how hard it was to articulate your feelings for the movie. As soon as the camera came on, you totally clammed up and didn’t want to talk about your life at all. What unblocked you?

Rae Spoon: I wasn’t expecting an interview on film to be so difficult. Film captures your every reaction. Chelsea was very flexible on some things. Not flexible on “Are we going to tell the actual story? ” I was like, “Hey, let’s talk about how I live in Montreal and eat croissants every day.” How I got unblocked is that I started writing stories for Chelsea for the film. It felt like I was mapping out a field of landmines.

Chris Berube: Having Rae write the narration makes this feel like a more collaborative type of documentary.

Chelsea McMullan: Absolutely, this is the most collaborative documentary I’ve ever made. Rae is an artist as well, so we definitely made this film together.

Rae Spoon: Being a songwriter, when I pick what to write an album about, I first think, “Maybe I’ll make an album about dancing in a club, and having no cares.” And then I (wind up making) an album about grief. In my songwriting, I’ve stayed close to things that are uncomfortable to me. It’s hard to let someone else put you there. And to know that’s the driving narrative. I don’t emote a lot besides singing. Trying to get me to emote is difficult, so it’s about building trust. That took a lot of time, but we were there for each other (during) major events in each other’s lives.

Chris Berube: I imagine specificity in storytelling comes naturally to you as a country artist. In country, micro-specificity is so much what it’s about. Like, very specific character names, songs that often have way more detail than they need.

Rae Spoon: I know what you mean. Like, in the Dolly Parton song, who is Jolene? Apparently, it was a ten-year-old girl she met once.

Chris Berube: That’s kind of messed up! That song is about boyfriend stealing, and the subject was secretly ten years old?

This interview has been condensed and edited for publication. My Prairie Home debuts at Sundance this week, and will open in Toronto on February 4 before rolling out across Canada.

Chris Berube is an Audio Producer at Slate Magazine. He is a former podcast producer and host for The Walrus.