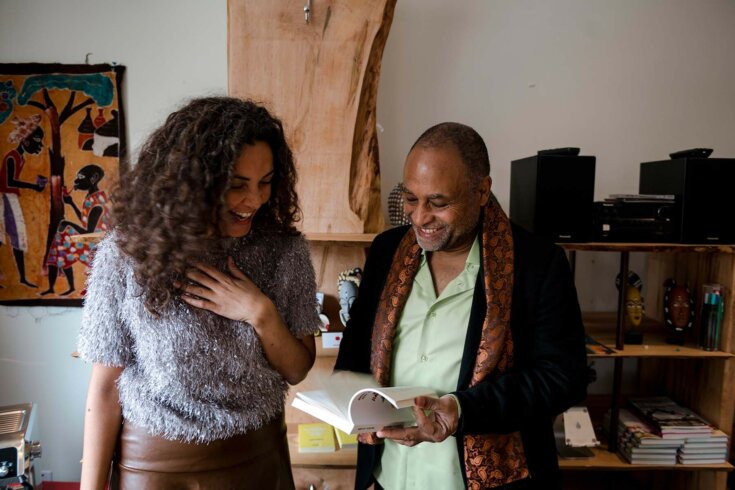 When Haitian president Jovenel Moïse was assassinated last summer, Dany Laferrière, perhaps the most famous living writer from the island nation, seemed exasperated by media requests for comment. “I had the impression,” he wrote in an article published in the Le Journal de Montréal, “that people expected me to confirm the president’s death from the foot of my bed in Montreal.” Instead, he pointed to Les villages de Dieu. The novel, published in 2020, depicts a gang-ridden slum the police cannot enter; for Laferrière, it humanizes Haiti’s poor while demonstrating the disintegration of state power that enabled the assassination. And, unlike him, its author, Emmelie Prophète, is based in Port-au-Prince.

The media bit. Suddenly Prophète was being interviewed by major outlets across Quebec, leaving her Montreal publisher, Mémoire d’encrier, scrambling to print 10,000 copies of Les villages de Dieu in less than a month. According to Prophète—all quotes in this story translated from the original French—the turn of events changed “the destiny of the book.” She had five previous novels and several prizes and nominations to her name, but Les villages de Dieu’s success in Canada and Europe brought her a new level of fame. Prophète singled out the “risk takers” at Mémoire d’encrier, founded by Haitian poet Rodney Saint-Éloi, for their long-term commitment to her work. “It does such good to have presses like that.”

Active since 2003, Mémoire d’encrier churns out nearly two dozen books a year from its office on the border of Rosemont and Villeray. Releases include Quebec-based writers alongside writers from Haiti, Africa, and France, with a robust selection of translations of authors like Giller Prize winner Souvankham Thammavongsa and acclaimed American novelist and poet Ocean Vuong. What’s more, the press has arguably become the leading French-language promoter of Indigenous literature. Its catalogue features Innu writers Naomi Fontaine and Joséphine Bacon as well as translations of Thomas King, Leanne Betasamosake Simpson, Tomson Highway, and the late Lee Maracle. With regular nominations for Quebec’s top prizes and distribution networks in Canada, Haiti, and parts of French-speaking Europe, Mémoire d’encrier is now a major force in francophone letters. Its staff includes six full-time employees, three of whom are people of colour, including the director.

Mémoire d’encrier’s success stands out against both Quebec’s reputation for cultural homogeneity and the pervasive whiteness of the publishing industry. Quebec’s media sector, its largest arts council, and its broader cultural scene have all faced criticism in recent years for their lack of diversity. Premier François Legault’s refusal to recognize systemic racism has become a continual source of controversy. Meanwhile, within publishing, the problem appears more general. After the 2020 social media campaign #PublishingPaidMe denounced the small advances paid to Black writers, a New York Times report revealed that only 11 percent of books released by major American presses in 2018 were by people of colour. That number correlated with the dominance of white editors. A 2018 diversity study by the Association of Canadian Publishers found that, of the 372 publishing professionals who responded, 82 percent identified as white.

But what happens when a press does more than increase its roster of writers of colour? What happens when diversity is built into its very structure? Mémoire d’encrier suggests that the results can be transformative.

That a Haitian man runs a press in Montreal should not be surprising: the city has been a hub for literature from the Caribbean country for over fifty years thanks to linguistic affinities and waves of immigration. But Saint-Éloi’s project is distinctive for its longevity, its reach, and the breadth of its mandate. Rather than hope for inclusion by Quebec’s old cultural guard, he sets his own terms. “Me, I take everything that is considered peripheral and I place it in the centre,” Saint-Éloi declares, at once soft-spoken and energetic. “I think the revolution in books is that we can no longer continue to ignore the world.”

His mission has been to disrupt what he sees as pervasive apathy in Quebec’s publishing scene. “It was as though we were settling. We were satisfied with being a province.” He recalls reading Hugh MacLennan’s Two Solitudes, about the division between francophones and anglophones within Canada, and being alarmed by the narrowness of the frame. “Where are the Black people in these two solitudes? Where are the Indigenous people? Where are the Arab people?”

Still, Saint-Éloi rejects the label of “Black publisher” as condescending and inaccurate. Early on, Mémoire d’encrier’s catalogue highlighted writers from Haiti and the diaspora, featuring a mixture of new work, anthologies, and classics. But Saint-Éloi is quick to point out that he included Moroccan and Tunisian authors in his first year. He also publishes white authors from Quebec and France who share his concerns with cross-cultural dialogue and decolonization. In 2009, the press expanded into translations, and eight of the twenty-five titles from the 2021 season come from other languages. And, since securing a dedicated European distributor in 2020, its reach has become global.

Yara El-Ghadban, a Palestinian immigrant who published her first three novels with Saint-Éloi—and was recently recruited as an editor for the press—says this international outlook made Mémoire d’encrier the obvious choice for her books. “I needed a press that understood where I came from; that understood my experiences as a woman of colour, an immigrant, an exile; that also knew my culture, my history.” On the whole, she notes, Saint-Éloi is one of the few people of colour with influence in Quebec’s literary scene. If conversations about representation are now more common, that is due in large part to his work over the past nineteen years. “Before Mémoire d’encrier,” says El-Ghadban, “what was there? And now?”

Saint-Éloi was already established in Haiti’s cultural sector before moving to Quebec. In 1991, when he was not yet thirty, he launched a press in Port-au-Prince called Mémoire, with the goal of promoting a new generation of Haitian poets. He also ran a cultural page for the country’s oldest daily newspaper, Le Nouvelliste, and founded a book festival. Eventually, though, the country’s sociopolitical climate wore him down, and he chose to emigrate.

Canada made sense as he had completed a master’s degree in literature at Laval University. But, when he made a permanent move in 2001, he found life as a member of a racial minority harder than expected. Shocked at the harassment of Black men by the Montreal police, he avoided taking the metro for months. He hoped to teach but did not know how to go about looking for a job. For a while, his situation looked depressingly familiar: here was yet another immigrant whose credentials and capabilities were going unrecognized.

But Saint-Éloi was also part of another tradition. Haitian intellectuals began migrating to Montreal in the 1960s, during the dictatorship of François Duvalier, and many continued their work in exile. They founded journals, political groups, and cultural centres, and actively participated in Quebec’s Quiet Revolution. Saint-Éloi’s first activities in Montreal were firmly anchored within this diasporic community. He began collaborating with Le Centre International de Documentation et d’Information Haïtienne, Caribéenne, et Afro-Canadienne (CIDIHCA), a centre established in 1983 in part to safeguard Haiti’s cultural heritage. The organization includes a library, an archive, and a publishing unit. For Saint-Éloi, however, working with CIDIHCA felt too close to home, as though he had not actually left Haiti. Founding Mémoire d’encrier was a way of embracing his adopted home.

From the beginning, his approach was ambitious. He launched the press at Montreal’s marquee book fair Salon du livre de Montréal, where he would be most likely to receive media attention. Saint-Éloi was offered a free spot in the venue’s basement, but he refused, certain that starting there would confirm his status on the margins. Instead, he asked for a stand in a prime location with a $20,000 price tag—and argued he should get it for half price. “I said, I will bring people here that you have never had, people from everywhere, Black people, Arab people. I will give you an audience.”

At the time, Saint-Éloi’s words may have seemed like bravado. During the first few years, the press was largely run out of his apartment in working class Pointe-Saint-Charles. At one point, a last-minute donation from a bookstore owner in Martinique saved the endeavour from bankruptcy. But Mémoire d’encrier has long been on solid financial footing—and not just because of support from Canada’s granting agencies. Saint-Éloi promised an audience, and one showed up.

Among the press’s achievements, its role promoting First Nations literature stands out. According to El-Ghadban, “It took a Haitian, Rodney Saint-Éloi, who came and who said to himself, Why? Why aren’t we publishing Indigenous writers? It took an editor who will go do book launches on reserves.” Frantz Voltaire, the founder of CIDIHCA, credits Saint-Éloi for promoting Joséphine Bacon, now internationally celebrated for her poetry in both Innu and French; most of her releases with Mémoire d’encrier have been bilingual editions. Saint-Éloi has also helped put Indigenous literature on the map in France, where Mémoire d’encrier’s offerings can be found in both independent bookstores and major chains.

El-Ghadban emphasizes that this success is possible because the press not only seeks out new voices but also builds relationships with them. “We are not waiting for manuscripts, because we work with writers who are often exiled, uprooted, marginalized. If we waited for them to come to us, we would never find them.” She wrote her own first novel after Saint-Éloi reviewed some early pages and encouraged her to transform them into a manuscript. Cree writer Virginia Bordeleau has a similar story. She was giving a reading at the inaugural First Nations Book Fair, in 2011, in Wendake, an urban reserve located near Quebec City. Her second novel had recently been rejected, so she joked that she was looking for a new publisher. Saint-Éloi was in the audience and came to her with an offer.

This willingness to take the initiative extends to international authors—whose works, importantly, are not eligible for government subsidies. “We don’t ask questions,” El-Ghadban insists. “Are they Canadian or not Canadian? Do they have the right passport? Do they have their papers? Can we go look for a grant for them?” The result has been some surprise bestsellers—such as Les villages de Dieu. But, more importantly, cultivating an expansive catalogue reflects the spirit of the press. “For us, there are no borders,” El-Ghadban insists. “We see writers who have things to say and then we consider them necessary. Their books must exist.”

Amanda Perry teaches literature at Champlain College Saint-Lambert and Concordia University. She is a contributing editor with the Literary Review of Canada.