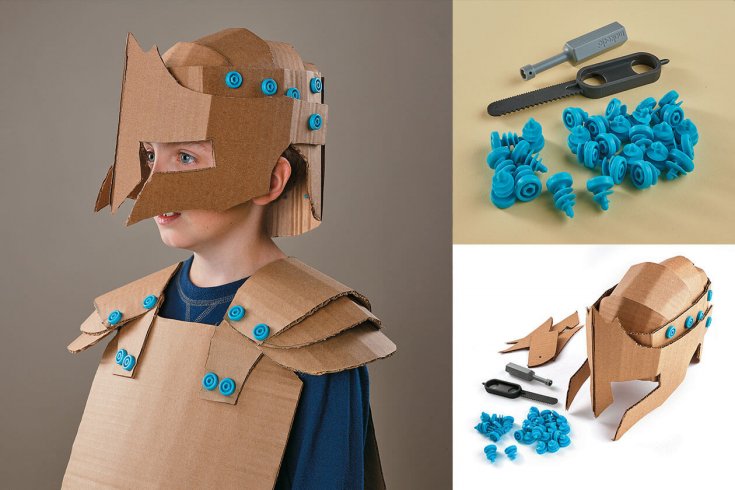 The 2016 Lee Valley Christmas Gift Catalog arrived last week in the mailboxes of Canadians desirous of immersion in a world where esoteric woodworking tools nestle up against collapsible bird feeders, fruit fly traps, and seafood scissors. Amongst the tenon cutters and calipers, there are the Original Slinky (Collector’s Edition), models for an ornithopter and a catapult “inspired by the conceptual drawings of Leonardo da Vinci”, a magnetic cannon, and finger puppets. Beautiful little Japanese Kyougi wood notepads. A Makedo Cardboard-Building System for making stuff out of cardboard boxes (ask your mother or father for assistance). Suspenders with sturdy two-inch straps, elastic (so they “won’t restrict your movements when bending or squatting”) and decorated with woodworking tools, including a #4 smooth plane and a carcass saw. The famous Whirley-Pop stovetop popcorn popper: “Virtually every kernel pops and nothing sticks to the bottom.” Ratcheting screwdrivers, Danish dough whisks, and a fifty-two-piece set of rare-earth magnets!

Lee Valley Tools was founded by Leonard Lee, OC, who died this past summer at age seventy-seven. Born in Wadena and raised in Algrove, Saskatchewan, Lee studied engineering at Kingston’s Royal Military College and Royal Roads Military College in Victoria, BC, and economics at Queens. He worked in Ottawa in the civil service for fourteen years, but in 1978 decided to start a mail-order catalogue business—in the words of his son Robin Lee, “With something unrelated to what he really wanted to do, which was work with woodworking tools.” He designed and had made a cast-iron barrel stove kit, based on the stoves that had heated the one-room schools he attended as a child. Lee and his wife Lorraine cut-and-pasted the first Lee Valley catalogue on their dining room table in October 1978, and sold it for $1 in an ad on the back cover of Harrowsmith. They received more than 2,000 one-dollar bills by mail in response.

Over the years, Lee Valley has expanded from mail-order tools into gardening and other household products; opened eighteen retail stores across Canada; created its own line of woodworking tools; designed and manufactured a line of surgical tools (a business since sold) and published a number of books. In 1995, Lee wrote The Complete Guide to Sharpening, which includes chapters such as “The Meaning of Sharpness” and “The Physics of Severing Wood Fibres” (“I know. You want to go directly to tool sharpening without having to go through a course in physics. Well, you may do that if you wish.”)

Leonard Lee’s older brother, Bob Lee, has also written a book, All the Knots You Need. He oversees the editing of the copy for the catalogues and on the website, keeping detailed notes of grammatical pitfalls, words commonly misused. The catalogue is beautifully written and scrupulously edited. Not showy. No boasting, just quietly confident recommendations: “These are very good knife sharpeners,” and “This is an excellent portable radio to have during power failures.”

The catalogue is, says Robin Lee, the current president of Lee Valley Tools, “A character itself, the face of the company.” There are two in-house writers, and a technical team in Montreal is hired to write the catalogue in French—“Not a translation but from scratch. Writing and literacy are very important to us.” Copy is written in consultation with product managers, and every piece has been edited by one or more of three members of the Lee family. “We want an honest style of writing and a little bit of a dry sense of humour,” he says. “The style of a trusted neighbor you go to for advice.” Or, perhaps, the older gentleman in the local hardware store? “That’s it!”

With their wide aisles, big windows, and wooden floors, the stores recall an earlier era in shopping. So does the customer service; walk-in shoppers assemble lists and approach the long wooden counter, from behind which the desired merchandise is procured by employees who are typically practitioners in their own right. At the downtown Toronto store, a staff member named Margaret Anne, who says she is obsessed with tools, magnets, and lemon curd, expresses quiet envy for a cardboard Viking ship on display in the company’s Vaughan, Ontario, location. This holiday season, every Lee Valley store was asked to make a large model out of cardboard using the Makedo kit (downtown Toronto made Snoopy’s Sopwith Camel).

“One of the most powerful things you can do is create,” says Robin Lee. “Everybody remembers coming home from school and saying, ‘Look what I made.’ It’s about self-worth and pride. The opportunity to create things physically, to control your environment, to the extent we did before iPhones and the internet, that’s missing these days.” Almost every single page of the Lee Valley Christmas catalogue features close-ups of hands and fingers cutting, hammering, clipping, fixing.

The Lee Valley spirit, as expressed in both the product line and in the catalogue, manages to be both serious and playful about making things—not only from cardboard, but projects with artisanal aspirations and impressive lineage. The Bohm Stirling Engine Kit “lets you build a reinterpretation of nineteenth-century Stirling engines.” The Cast Scratch Stock (for decorative reeding and beading on small pieces of furniture) is a “close reproduction” of one made by an English firm founded in 1826. Amateur science projects and inventions are encouraged by whimsical offerings like the Wireless Weather Center, the Water Clock and the Solitary Pollen Bee Nest. Culinary experimentation is made irresistible: You might not think you need a silicone yolk separator, but if you were to attempt a very large batch of lemon curd, as Margaret Anne points out, you might.

If a customer is not satisfied with a Lee Valley purchase, the item can be returned within three months for exchange or a complete refund. A pair of surgical brushes described with unusual hyperbole as “The World’s Kindest Nail Brushes”, sells for $2.95 in the current catalogue. “For the longest time,” says Robin, “they sold for $1 a pair. And the catalogue said, ‘If you don’t like them, write to us. We’ll refund you $2, and you can keep the brushes.’ Well, we sold hundreds of thousands of brushes, and not one person ever took us up on our offer.”

The ethos is that of a family enterprise with deep roots in rural and small-town Canada. When asked for a favourite piece of Lee Valley catalogue copy, he offered this description of “a really ugly box tool” written by his father: “A tough, ugly tool that is perfect for the person whose usual solution to a problem is to use a larger hammer. Also ideal for the person who tends to leave tools out in the rain. This one can’t get much uglier.”

Several weeks ago, Robin and Bob Lee embarked on a new project. Bob was thinking about producing a style guide for staff; Robin said, why not develop one for the general public, an explanation of how to write well? “We’re thinking of calling it All the Grammar You Need,” he says.