A Few Acres of Snow | The Walrus
Skip to content 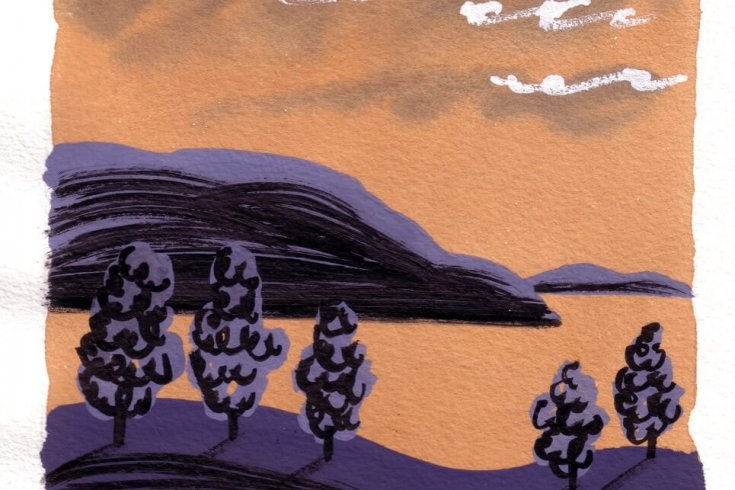 A man arrives at the lake late in the season. He is there to close the cottage, to bring in the supplies for the next year, and to work on a book. He wants to be alone. He wants to leave the world behind. After unloading the truck, the man walks down to the shore, among the dead maples, to revel in the loveliness of intoxicating quiet, of nobody else. A loon begins to skip across the surface of the lake water, lifting itself into the air and, to his delight, out of nowhere snow begins to fall, slowly and calmly. He hurries inside to light a fire.

It snows slowly and calmly all night and through the next day. The man is spending his retirement writing a book tentatively entitled One Hundred and Twenty-Seven Paintings to See Before You Die, a kind of gallery tour guide for the world. It is pleasant to write while snow is falling, letting thoughts fall one by one, or many by many, onto the accepting ground. The snow reminds the man of his childhood school in Ottawa and recess, the fields of freedom before he lost himself in chatter, in marriage, in his career as a lawyer, in the world.

The snow keeps falling. After a few days of watching it gather from his writing desk, certain practicalities begin to assert themselves. The man brings in more firewood, just in case. How is he to extricate his truck? And how is he to drive the thing even if he can shovel it out? No phone. No wireless. After another night, another day, there’s enough snow outside his door that he can only open it a crack, letting stray strands of snow in like meagre poltergeists. He has a book to write, though, and doesn’t worry too much, drinking pots of Earl Grey tea and letting his beard grow.

After a week of the snow, the man figures he has a story. None of his ancestors ever knew such snow, he thinks proudly. The snow is halfway up the windows, which look out on three sides. At night he dreams of a blizzard covering his body, filling his mouth so that he is unable to speak. He dreams of the snow covering his book. When he wakes up, the snow has reached the top of the window, blocking the light like a raising shade. He makes beans for breakfast. He has always loved baked beans. He especially loves the tiny nugget of bacon in cheap canned baked beans. The man only ever eats them alone at the cottage. After the beans, he opens a tin of peaches, which he eats with a spoon, right out of the can. The syrup has soaked up the flavour of preservation along with the peaches, the tinniness as delicious as the fruit.

After the meal, the fears from his dream resume. How deep can snow fall? How long could he be snowed in? He worries that his family and a few others might worry. Or is the snow falling on them, too? He thinks about his mother. He doesn’t think about his ex-wife. His daughter works at a bank in Hong Kong. As quickly as the fear flutters into his chest, it soars away again. The cottage is full of sustenance and fuel, food and books and paper. And if the snow dumps all the snow in the world over him, the spring will eventually melt it all away, right? The spring will eventually spring. That’s why they call it spring.

So the man stops worrying, stokes the fire and starts writing again. He works on the paintings at the Art Institute of Chicago: Caillebotte’s Paris Street; Rainy Day, Seurat’s Sunday Afternoon on the Island of La Grande Jatte. He sleeps and wakes to half-darkness, his dreams more vivid than sight. One more day and one more night and he wakes up and there is no more light. The snow has swallowed him.

The cottage is warm and grows warmer. He dims the lights and lets the fire burn down. The man removes his clothes. Naked, he lingers by the light of a candle over Vermeer’s Woman in Blue Reading a Letter.

He has no sense of time or place, no here, no now. He realizes that the smoke must be rising to somewhere. Up. He wants to go up.

The man clears the embers out of the fireplace, puts on his two fall coats, his leather gloves, his golf shoes. Through the opening of the flue, gripping the stone sides, he is able to push himself, bit by bit, through the chimney toward the surface. The canal, the tight passageway through the snow above the chimney, is slippery and tight, but, arching his back and folding his gut, he can spasm himself up. In the darkness his contractions are the only measurement of time or distance, the only sense he has of the world beyond his skin, until, over his hunched shoulder, twisted back to look, he catches light. He shuffles, hurrying to pull himself up through the snow toward the brilliance, the half-forgotten illumination of day. He sticks his head into the glory of open air with a deep, soul-cleansing breath. Then he elbows himself, with a last grunting effort, over the top into a triumph. A total triumph.

He is standing once again under the indifference of the merciful sky. No horizon any longer, no beginning and no end, all the same. Everywhere the snow is falling, slowly and calmly.

Stephen Marche is a Toronto writer. He is currently at work on a book about the risks of civil war in the United States.
Seth