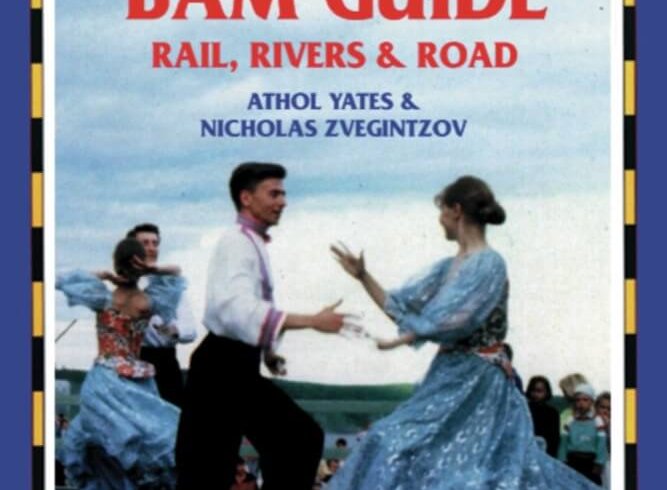 “Russia as a whole has little tourist culture and the northeast has none whatever.” So states the Siberian bam Guide: Rail, Rivers and Road. But with the gusto of the little guide that could, this still-important book forges along the northeastern arm of the Trans-Siberian Railway — the Baikal-Amur Mainline — and, in its second edition, confidently navigates the Lena River and the Kolyma Highway. Whether you’re lazing in the top bunk of a train, cruising on a Soviet-era steamship, or hitching a ride, the journey promises to be as memorable as the destination. Along with the whimsical sketches of wildlife and edible berries in the appendix, it delivers essential information (all trains run on Moscow time, even on the Pacific coast some seven time zones away, for instance), and offers insider advice (fill up on butter before drinking, “to minimise vodka damage”).

The sobering realities of Siberian life are never glossed over. Most towns are little more than a huddle of concrete apartment blocks. At the northern edge of the bam, in the Republic of Sakha, a separate visa is required, to ensure that the region’s limited food and goods aren’t exhausted by too many visitors. Yet these scenes of hardship are countered with portraits that capture the legendary “frontier character” of the Siberians — a hardy bunch who offer cigarettes, vodka, and bullets to their shamanistic deities — and with mythological imagery of the land itself, which sprouts “drunken forests” and memorializes a spy, a Decembrist, and a mighty sugar beet harvester in a string of railway stop namesakes.

Of course, life on the rails has its own excitement. The guide notes that Stolypin carriages, notorious for shuttling prisoners to the gulags, still rattle along the tracks, so “if you find yourself assigned to a compartment with shuttered windows and barred doors, and occupied by up to 16 others, you are in for extreme adventure travel.” Not to worry: the Siberian bam Guide is along for the ride.