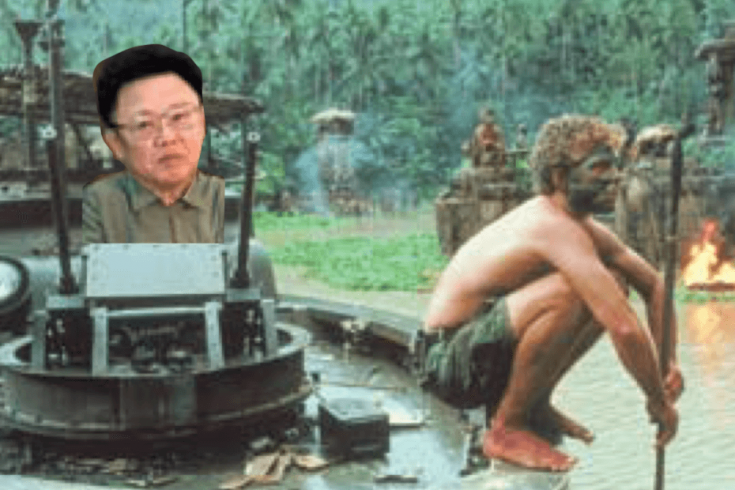 [Kim Jong Il’s] infatuation with film is obvious from the museum’s
first room, where an entire wall is covered with a massive list of every occasion when Mr. Kim gave an order to North Korean movie producers.
—The Globe and Mail, September 5, 2007

From: Benevolent Father of the People
Re: Meet Me in Pyongyang!

Comrades! The latest pass has given us a solid third draft and represents some really substantial work. For instance, I love what you’ve done with the character of Dong-Sun, the peasant boy. His motivation is much stronger now, and I can really feel his burning desire to lead his village in the drive to increase its sorghum yield. Same with Chin-Hwa, the flunky historian. Maybe the best portrait of an anti-party counter-revolutionary factionalist I’ve ever read. The scene where he’s packed off to the re-education camp gave me shivers!

But, as my father the Eternal Leader was fond of saying, “There’s always room for improvement. And if there isn’t, we’ll make some.” The first act, for example. I still think it takes too long to get going. Call me a bourgeois formalist, but I was on page 32 and still waiting for the inciting incident. Look at any of the Rambo movies. Now, there’s storytelling! Why? What do they have in common, apart from the correct viewpoint on historical necessity? Great openings, comrades, great openings! They hook you at the start and never let you go. See Syd Field on this. He’s gold.

From: Sun of the Nation
Re: Memoirs of a Tank Corps Girl Comrades!

I don’t mean to sound blunt, but haven’t we seen this story before? You know, the one where the pure-hearted girl from the countryside, ablaze with the passionate revolutionary ideals instilled by her recently deceased father, travels to the city to enlist in the anti-imperialist struggle, only to have her noble efforts sabotaged by a loathsome cabal of revisionist stooges who threaten not only her honour but the shining achievements of the Motherland, before she kicks ass and sends them and their parochial feudal-Confucian ideas back to the Dark Ages? I know I have. Too many times!

Now, don’t get me wrong. There’s nothing I like better than a movie that powerfully elicits the revolutionary enthusiasm of the masses and celebrates the great upsurge in economic construction and steady, vigorous social development begun by our heroic forerunners. Didn’t I green-light Fires across the Land and My Guerrilla, Your Guerrilla? I admit the script provides opportunities for some terrific action sequences — especially in the battle for the reactor — and I agree the central character of Kyung-Soon is a great role for any actress. (It’s the kind of thing a young Meg Ryan would have jumped at!) But really? Same old, same old. And as for punching it up with musical numbers, tank choreography has been done to death.

From: Fatherly Leader
Re: Song of the Flower Girl

Comrades! I’m still not seeing this. Sure, it provides a searing indictment of a capitalist system whose neo-colonialist exploits have succeeded only in exacerbating its own internal contradictions. And yes, its depiction of our own dynamic forward march along the road of immortal socio-political integrity is contrasted gloriously with the sordid bourgeois decadence and crafty scheming of imperialist ringleaders. Sweet!

But where’s the conflict? Where’s the action? I’m not saying you have to go all chop-socky, but this talkfest will have people stampeding for the exits, I guarantee it. Remember what happened at the preem of Night of the Combine Harvester? Same problem. The film had barely begun to unspool when the sprint up the aisles began.

Now, think of that great Steven Seagal vehicle On Deadly Ground. Would that movie have worked if Forrest Taft had negotiated with the oil companies instead of blowing up their wells? Exactly. So in the middle of your third act, when Duck-Hwan, the corrupt son of the ruthless oligarch, attempts to bribe Chung-Ho, the honest Senior Official of the Central Committee of the Workers’ Party, wouldn’t it be better if Chung-Ho simply took him out with that bazooka you carefully seeded in the first act, instead of debating him? Okay, I’m just spritzing. But I mean, comrades, are we making a movie-movie or not?

From: Lodestar of the 21st Century
Re: Make Mine Marx

Comrades! A glorious achievement! The way you solved that second-act climax problem by creating the wraparound that lets us see the true nature of the heroic village elders and their struggle against the old patterns of formalist obscurantism? Pure genius! And the scene where the innocent Byung-Soon displays true revolutionary attitude by selflessly sacrificing her virginity in order to expunge the bourgeois revisionist venom threatening her family? Well, it may have been that third snifter of Hennessy, but I don’t think I’ve been so moved since Van Damme’s unforgettable perf in Double Impact. And what can you say about a script that puts forward a fresh but still correct line on rice production while never relinquishing its strong revolutionary principles — and still manages to point out the twin evils of bourgeois parochialism and nepotism? All that plus fifteen dance numbers!

Great work, comrades! See you on the red carpet!