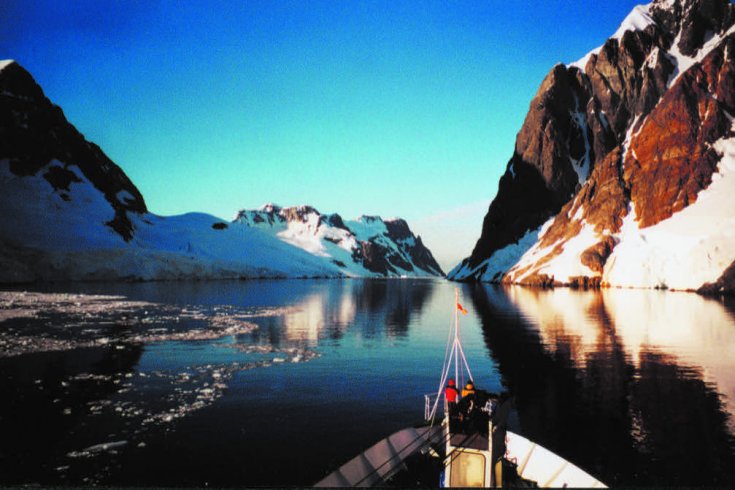 View from the Lyubov Orlova. Photo by RDM Studios.

Greenland, 2000 — The expedition was operated by an adventure-tour company, but the Lyubov Orlova was an old Russian freighter, chartered from a Russian owner and run by a Russian crew. I was researching my next novel, about Franklin’s doomed search for the Northwest Passage in 1845. The book was to focus on the libraries aboard Franklin’s ships, the Erebus and the Terror, and I had already spent months raiding the British Admiralty’s provisioning records, trying to figure out which books they had held. This Arctic trip was the final stage of my research and would, I hoped, provide me with necessary information about the voyage itself. Promisingly, our ship held the same number of passengers as the number of crew aboard Franklin’s ships. Many of those men starved to death when the ships became trapped in the ice during their second winter in the Arctic.

On our first day the expedition leaders welcomed us with a snack: brownies and three kinds of melon. Snack became an important part of shipboard life, an eagerly anticipated daily ritual. Unfortunately for my novel, I soon forgot large tracts of the Arctic landscape, but remembered, in loving detail, a particular Russian pastry stuffed with scalloped potatoes.

Unlike Franklin’s crew, we required a lifeboat drill. The mostly elderly and American passengers shuffled good-naturedly around the deck while our ex-military expedition-leaders strutted about with whistles and clipboards, yelling at us to stay back from the railing in case we were hit by imaginary descending lifeboats. Our leaders could shout, but apparently not spell. The literature we’d received prior to departure contained a confusing misprint: “Each passenger must bring their own rubber boats.” Had any of us taken this instruction at face value, perhaps we wouldn’t have needed the drill at all. Instead, the question of footwear plagued us through the entire trip. Each evening we were briefed on plans for the following day; inevitably, someone would ask, “What should we wear on our feet”

When we left the ship, the leaders would say things like, “We have guns and we know how to use them,” or, “We’re going to clear the beach to make it safe for our landings.” This was in reference to the threat of polar bears, who apparently were starving. Rumour had it the last group had been attacked. Many of us were eager to encounter wildlife, even if it had to attack us, but in ten days we saw only one polar bear, and it was a white speck barely visible through binoculars. We did see fulmar gulls and guillemots and harp seals, and one woman thought she saw a herd of musk-ox on a beach, but closer inspection revealed a cluster of rusted oil drums.

The landscape was monochromatic: the sky, the rock, the sea, all the same slate grey. I tried to imagine what Franklin’s men—most of whom had never before encountered icebergs or huge slabs of rock scoured by glaciers—would have made of such a remote place. Halfway through the trip, we visited the small graves of three of Franklin’s men who had died during their first winter. The markers were completely exposed, the graves dug into the shelves of broken shale that form much of Beechey Island. I felt sad for the young men who had died, but more so for those who had buried them. Franklin’s men couldnt have been feeling optimistic about their voyage of discovery at that point.

At least they had the prospect of genuine discovery to sustain them. On my voyage of discovery we were bombarded with filler: lectures and movies every evening. The talk on Vikings contained the rather memorable line, “…and then Leif Erikson became a Christian and stopped his killing ways.” One of the films was called Greenland: Where Are the Vikings, while the sound for a different film, Greenland: Where Are the Seals, was so garbled it seemed the film was being narrated by the seals themselves. There was also a lecture on Franklin that sentimentalized the slow starvation of the crew and their death march to King William Island. The lecture ended with a sloppy rendition of the Stan Rogers song about Franklin. I refused to sing.

Another educational component that added nothing to my research or the ship’s morale: every day we were taught a Russian word. This was designed as a gesture of goodwill toward the crew, but the passengers struggled with each word and were too embarrassed to use them. On the day we were meant to learn spacebo (thank you) I could hear other passengers whispering urgently to one another all afternoon. Placebo, placebo, they said. Some of the Americans were quite nervous about the Russians, and one man accused them of spying. Apparently he’d seen miniature cameras in the corridor lights. And indeed, most of the Russians were not who they appeared to be. Many of them had taken jobs on the ship because the pay was better than their regular jobs. The woman who did the ship’s laundry was a doctor. The young sailor who helped us up and down the gangplank was an officer on a nuclear submarine. We had two former Olympians, a swimmer and a power-lifter, in the engine room.

One day I saw the head of our expedition arguing heatedly with the captain. That afternoon, when we were stopped in a cove having a barbecue on the rear deck of the ship, the captain abruptly pulled anchor and steamed away at full speed. Any plates not weighted down with food careened across the deck like Frisbees. The tour company, it turned out, was going bankrupt.

Not quite a mutiny: that was as thrilling as it got for us. A year later, though, I came across an article about the Lyubov Orlova in the newspaper. Packed with adventure tourists, the ship was refused docking privileges in Iceland because the company couldn’t afford the fees. With the passengers unable to escape, the boats Russian owner ordered the captain to sail to Gibraltar. En route, an investor in the tour company agreed to pay the fees, and the orphaned ship eventually landed in Ireland. Reading this, I must admit, I became a little envious. Although the passengers quoted in the article downplayed the danger, there would at least have been moments of chaos, of unpredictability. This is what I didn’t have on my trip. This is what I would have needed in order to relate, in some small way, to Franklin’s men.

By the time our trip ended, on Baffin Island, I had abandoned my novel. I was too comfortable, too well fed, to fully imagine the agonizingly slow starvation of those 129 men. Even given the bizarre behaviour of the tour company and the cold remove of the Arctic, I was just—well, I was just too damned safe.