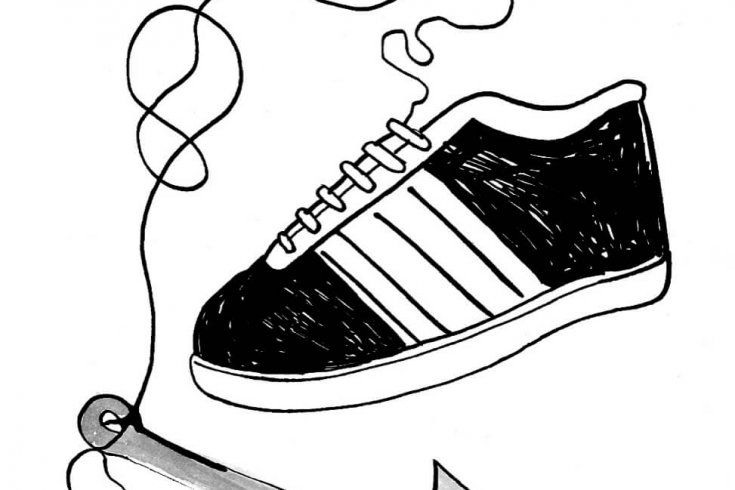 On opening day at Training Camp, a specialty sneaker boutique in Manhattan, twenty-seven-year-old Yu-Ming Wu is slouched at the back, thumb-hammering a text message into his T-Mobile Sidekick. Something unexpected has happened. Something good. For some reason the place isn’t overrun with the usual mobs of sneaker freaks and the shelves, which look like wooden ammunition boxes, are lined with vintage sneakers that disappeared from other stores long ago. After finishing the message, Wu dials a phone number and talks quietly with someone on the other end. When he’s done, he asks the salesperson for three different styles, all size nine. The store has two of the models in that size, and Wu lays out $240 (US) to buy both pairs after trying on a single shoe.

Outside, he relaxes and smiles. We walk a block to his silver Acura sedan, where he opens up the boxes to show me the shoes more closely. One is a pair of limited-edition Brooklyn Air Force Ones, a purply blue Nike sneaker with the borough name on the heel and the logo of the N subway line on the tongue. This pair, Wu says, are for a friend who has been hunting them for some time, hence the rapid-fire communication. The same friend was also looking for the pair that wasn’t available, a Nike model designed by a Japanese boutique called Mita. The last pair — black, orange, and red Nike Air Maxes — are for Wu. But he still hasn’t found what he’s really looking for today: a pair of Nike’s newly released Be@rbrick Mayflys, created as part of a Nike-sponsored art exhibition centred on Be@rbrick, an iconic vinyl toy.

The Mayflys, in Wu’s estimation, are especially cool and thus well worth the search. Wu is on the front lines of hip — the kind of guy Nike’s “coolhunters,” as Malcolm Gladwell famously labelled the people at corporations who try to find the next big thing, might want to tag along with. If, that is, the companies weren’t themselves starting to manipulate the hipsters. Big corporations have learned how to court people who, like Wu, pride themselves on buying hard-to-find products that set them apart from the crowd. It isn’t the products themselves that lead to profits, of course — selling fifty or a hundred pairs of a particular shoe isn’t going to have much effect on the bottom line. The real payoff comes when the average consumer heads to JCPenny and has a lingering sense that there’s something special about a certain brand. Nike isn’t the only company playing this game, but it is the best at it.

After Wu stows his purchases in the trunk, we slide into his gleaming Acura. The upholstery is black leather and the dashboard is equipped with a global positioning system. “The car is mainly for sneaker buying,” he explains. “I used to have a bad habit.” As we weave our way down Broadway, he elaborates. He used to buy almost every specialty sneaker he could get his hands on, about a dozen new pairs a week, financing his addiction through his work in website design.

Our next stop is Flight Club, a crowded, narrow space in Greenwich Village that is packed with shoes sealed in shrink wrap and stacked floor to ceiling. When the store opened a few months earlier, people lined up every morning to browse new releases and mint-condition vintage sneakers. “It’s almost like a sneaker museum,” says Wu, “a tourist attraction.” The rarest shoes, mostly Nikes, sit in a glass case at the back, with price tags as high as $1,900. Wu scans the walls — no Mayflys here either — and commiserates with the guys behind the counter before we return to the car.

Hanging out with Wu is like travelling with sneaker royalty. Boutique staff know him well and trade information about the latest releases. Fellow sneaker hunters recognize him on the street and stop to chat. Wu runs freshnessmag.com, a popular site for information about limited-edition sneakers around the world. He’s a key node in the informal network that sifts through the marketplace and decides which shoes are really cool.

Details about product “drops” and new pop-up stores typically circulate by word of mouth, and on online forums and blogs.”Someone finds out [about a release] and then publicizes it. Or sometimes people from the manufacturers will drop messages onto the bulletin boards, you know, seemingly anonymously,” says Josh Rubin, who runs coolhunting.com. When I meet Rubin he is sporting a pair of Puma Beissers, their fang-shaped soles splayed wide on the sidewalk. Puma sent him the shoes, one of only 500 pairs, in the hope of getting coverage. “There are a few [companies] that I have an ongoing dialogue with,” he says. “They understand that what I do on the site is basically things that I like. And I might not like it.”

The fashion marketplace can be extremely volatile: brands can rise to iconic status only to struggle, then transform or die. Levi’s, for example, once the brand of brooding, motorbike-straddling outlaws, has lately been unable to shake the perception that its jeans are best suited to overweight, middle-aged couples; and a slew of smaller designer-denim brands have eaten away at its market share as a result. Nike, has managed to stave off this form of logo decline partly by positioning itself as an ally to traditionally anti-corporate groups — small boutiques, hipsters, and the alternative media.

Located on a noisy corner of Broadway, Nom de Guerre is one of the biggest sneaker-hunter haunts in New York, but you wouldn’t know it from the signage — a scuffed, painted logo on a black stairwell that leads below street level. Co-owner Wil Whitney says the owners are trying to set the store apart from its surroundings. “Broadway is real commercial, real in-your-face,” he says. “We’re not like that.”

Despite this anti-commercial philosophy, Nom de Guerre collaborated with Nike last February to produce forty-eight pairs of a limited-edition shoe — a 180 model decked out with Nom de Guerre laces and custom colours. The day they were released, more than a hundred people lined up outside the store to buy them. “My credibility, as well as my partners’, helps us get the collaborations,” says Whitney. “It’s a good image for us, and a good image for Nike.”

Major brands are seeking cachet on the retail side, too. The Nike iD store, which features customizable sneakers, requires appointments that are given out by special invitation or through a lottery. (I entered the draw months ago, and I’m still waiting to get in.) Russ Miller, founder of Vacant, a chain that sells limited-edition shoes, clothing, CDs, and toys, complains that big companies have stolen his underground marketing ideas. Miller pioneered the concept of pop-up or “guerrilla” stores, which open and close within weeks, sometimes months, delivering exclusivity via a limited purchasing window. “There’s so many brands that have been jumping on it,” he says. “I came up with the concept before anybody else . . . . A lot of advertising agencies that I knew at the time copied it.” Since Vacant started its first pop-up store in 2001, the concept has been adopted by many others such as JCPenney, Umbro, Target, and even Meow Mix.

The countless collaborations between major brands and independent boutiques, designers, and media have naturally led to questions of whether the latter group is selling out. As Scott Milden, founder of the independent sneaker company Medium, points out, “It’s a marketing schtick.” Medium also collaborates with independent designers on shoe designs, but Milden sees these partnerships as more sincere. “I’m about the little guy,” he says. “For the little guy to do a co-branded shoe with Nike is a huge marketing opportunity to get their name out there. But is it all pop and show? Absolutely. It is. There’s no content.”

But hold on a second — do deals with big corporations necessarily mean selling out? As one magazine story asked, “What does independent mean these days? . . . Who is selling out and who is, um, keepin’ it real? Are others buying into the culture, or are these artists and small companies compromising their vision?” The source of these philosophical musings? A promotional magazine produced by Toyota for its Scion models, which are being marketed as limited-edition cars for young drivers.

Back on the street, it looks like Wu might be out of luck with his Mayflys. With the afternoon winding down, we stop at one last boutique, a small, brick-walled store on the Lower East Side (since relocated) called Nort. And suddenly, there it is, perched on a wafer-thin shelf extending from the wall — a lightweight brown, blue, and white runner with the Be@rbrick logo on the heel. I can’t help but feel a surge of excitement. Wu gets serious. He reports his size to the guy at the counter and completes the transaction with the faintest of murmurs.

Wu isn’t buying as many sneakers these days. “There’s so much going on now,” he tells me afterward, referring to his day job and the growth of the scene. “It’s crazy.” Among the original trendsetters, he’s not the only one who appears to be slowing down. “Nike has caught on, and Adidas has caught on, and other companies have caught on,” says Nom de Guerre’s Whitney. “They’re doing all this stuff to manipulate the lines and grow the lines. A lot of the customers I’ve known, they don’t collect anymore because of this problem.”

Such is the paradox of cool: once a trend achieves critical mass, it’s doomed. Limited-edition sneakers may already be on their way out, their demise spurred on by one irreconcilable question: can any product made by one of the biggest manufacturers in the world, no matter how few it creates, really be that exclusive?