The Brawling East End | The Walrus
Skip to content 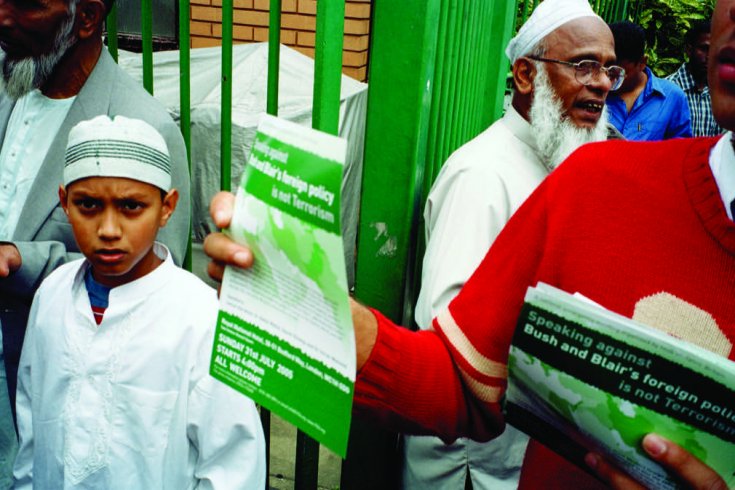 Activists outside a mosque in East London hand out leaflets criticizing American and British foreign policy. The East End has been the site of many ideological battles over the years. / Photo by Simon Wheatley/Magnum Photos

london—Just over a century ago, a young, stranded American sailor stepped out into the foul East London air: “We rolled along through miles of brick and squalor, and from each cross street and alley flashed long vistas of bricks and misery.” Published in 1903, Jack London’s devastating The People of the Abyss exposed the terrible poverty at the heart of the British Empire, in a district that over the years has spawned Charles Dickens’s Fagin (based on an infamous Jewish fence), Sax Rohmer’s Fu Manchu, Oscar Wilde’s opium-smoking Dorian Gray, and more recently, Monica Ali’s Nazneen, a young Muslim woman struggling with her arranged marriage in the novel Brick Lane.

The “Awful East” has traditionally been the first port of call for England’s immigrants and a battleground for each new culture and religion that arrives. In its formative years, the district saw anti-Irish riots in 1736 and mass violence against the Chinese in 1811. Since then, the East End has been hard-trodden by Huguenot weavers, Irish dockers, Maltese pimps, and Jewish refugees. The rows of curry houses on Brick Lane and the surrounding area have now been rebranded “Banglatown,” a cheery nickname applied to yet another divided immigrant community. This is the heart of London’s Muslim stronghold, profoundly affected when on July 7 four bombs rocked the London transportation system, killing fifty-two people and wounding 700. One of the victims was a twenty-year-old Bangladeshi Muslim woman from this enclave.

The Jamme Masjid, a dirty-brick mosque on the corner of Fournier Street and Brick Lane, has long been the spiritual centre for the flow of East London immigrants. Built in the eighteenth century as a Huguenot church, it later became a Methodist chapel, then a synagogue where, in 1904, on Yom Kippur, Jewish anarchists pelted ultra-Orthodox worshippers with bacon sandwiches. In 1976, the building was again transformed, this time into a mosque by a surge of Sylhetis from northeastern Bangladesh. Two years later, white supremacists from the far-right National Front marched past the mosque’s walls. The surrounding walls are still etched with graffiti tags for gangs such as the Brick Lane Massive scars from battles raging here long before the subway bombs exploded.

Siraj Salekin, a Bangladeshi community worker and Hajji (one who has completed the pilgrimage to Mecca), says he’s just “very sad” at how it’s all turned out. He’s also angry at the Muslim terrorists, whose actions threaten to destroy years of painstaking work tackling social exclusion, poverty, and drugs. Salekin has used Islam as a healing force for young men in the East End former gang members and imprisoned drug dealers among them who once wrought ruin within their families. But he has competition for their attention: the East End has always harboured political and religious radicals Fifth Monarchy men, suffragettes, Russian anarchists, and now militant Islamists such as al-Muhajiroun, a small but vocal cult of Muslim extremists formed by “sheik” Omar Bakri Mohammed, who preaches global jihad, and who fled to Lebanon after the attacks.

“The tension is so high around here after the bombings,” says Salman Farsi, a young Bangladeshi Muslim, as we sip sweet tea in Cafe Casablanca, opposite the 500-year-old Whitechapel Bell Foundry. The white-supremacist British National Party would love to start trouble, he tells me. “Probably some big nasty war will kick off with the bnp. They ain’t making the situation easier.”

On Friday evenings, Farsi conducts his prayers at the much larger East London Mosque, on Whitechapel Road, in the heart of Banglatown. The morning of 7/7, as the terrorist bombings are now known, members of his mosque raced to aid victims flooding out of Aldgate East and Aldgate tube stations, setting up reception areas in the London Muslim Centre, and offering volunteers to the nearby Royal London Hospital. Dr Muhammad Abdul Bari, chairman of the mosque and the deputy secretary of the Muslim Council of Britain, pointed out to me from his sweltering, whitewashed office, “In Islam we are asked to live peacefully with our neighbours. We’re all people of The Book.”

But during recent general elections, Bari was powerless to prevent the streets around his mosque from being plastered with extremist flyers exhorting Muslims not to vote. The threatened punishment for casting ballots was eternal hellfire and damnation. Spiritual threats escalated to physical clashes. Then the bombs hit.

This evening the steps of Bari’s mosque swarm with the faithful. Arabs, Bangladeshis, Africans, and white converts pour into the great orange brick building. “There’s shock, fear, and total disgust,” Abjol Miah, a youth worker and prominent member of the mosque, tells me as we struggle with our shoes at the entrance. “At first, we were hoping it wasn’t Muslims. In London, here in the East End, the community is solid. It’s not like those northern cities,” he explains, referring to race riots in the summer of 2001 between white working-class English and angry young Muslims in Bradford, Oldham, and Burnley. (Scotland Yard tracked down the homes of the dead 7/7 bombers in the same region, in Leeds.)

Miah sighs before heading off to perform wudu (ritual ablution): “People are going to start talking about losing freedoms, soon. We’ll be looking at a police state.” Another East End battle looms. The azan is called out and the flow of worshippers begins. 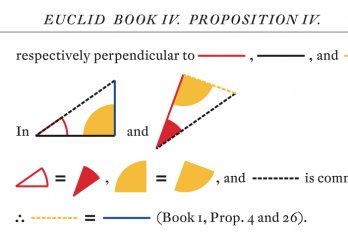 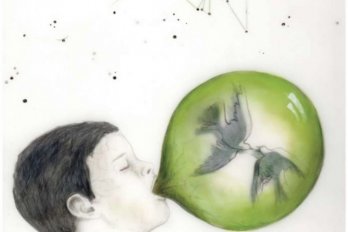