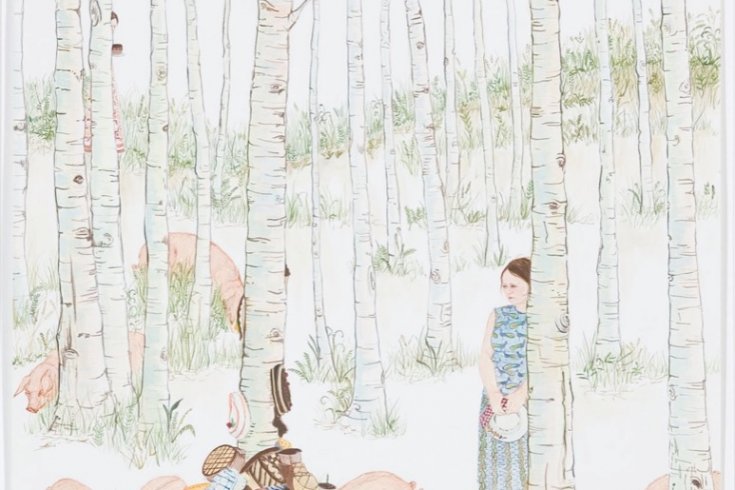 “This painting is titled Safekeeping and it’s about feelings of stagnation. Originally, I painted just a couple of women hidden behind the trees. Then I started to make them appear, and one ended up at the tree that has a cabin at the top and a pile of cakes at the bottom. The cake is a celebratory marker, and these women visit the tree and dump their cakes because they aren’t into celebrations or into traditional routines; they feel disconnected from their surroundings. There’s actually a woman buried beneath the pile; her feet are sticking out near where the woman is standing.

“I am the result of the feminist era. My parents divorced early, and I was raised by my mom. That definitely changed the course of my thoughts, but I’ve never studied feminism so I’m hesitant to say my work is feminist, even though writers have described it that way.

“Safekeeping is similar to a miniature painting. It’s like when you whisper, it’s intended for smaller groups of people to hear. They’re very private moments. I don’t always fully understand everything I’m painting and I doubt I would be motivated to make them if I knew exactly what they meant. It takes me about a month to finish a painting, and there are a lot of changes from the time I make the first sketches in my notebook to the final image.”