Sushi Then and Now | The Walrus
Skip to content 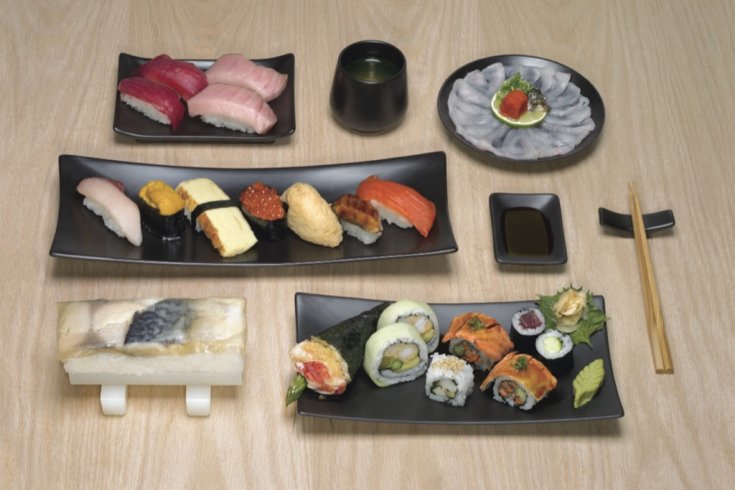 Sure, nowadays you’ll find sushi beside the cash register at your local gas station, but it has taken a long time for North Americans to accept raw fish as a respectable meal. Centuries ago, the Japanese inherited the Southeast Asian pickling practice of layering salted fish on rice, weighing it down with a stone and leaving it to ferment for up to three months. Always adept at refinement, the Japanese accelerated the process by adding vinegar to the rice and creating what we now call sushi. Everything changed in the nineteenth century, when chef Hanaya Yohei came up with a brave idea—he placed the day’s catch, uncooked, on top of fist-sized portions of rice and sold them at his stall on the busy streets of Tokyo. An instant hit and one of the first types of fast-food outlet, sushi stalls soon spread across Japan. It wasn’t until the late 1970s, however, that North America took notice. Today, anything goes. Herein, a brief history of sushi:

1. The original open-faced sushi, called hakosushi, was a combination of marinated fish on a bed of fermented rice. Portions were served as one large piece.

2. Nigiri-sushi was the next major evolutionary step. The raw fish on top of the rice was cut in half and served in twos. To this day, nigiri-sushi is served in pairs, since two bites allow diners to better appreciate the taste.

3. Tuna is the most coveted fish for sushi, and the fattier, creamier otoro (belly) is the favoured part. The pink chutoro (also from the tuna belly) is a close second.

4. Cultivation of nori (seaweed) began in the seventeenth century when fishermen started building offshore fences to trap fish. Seaweed grew easily on the fences and, once dried, made a perfect wrapper for holding rice and fish together.

5. Sushi connoisseurs always order tamagoyaki (Japanese omelette) to test a chef’s prowess in presentation and flavour. The perfect tamago is firm, not too sweet and not too salty.

6. Gunkan-maki (battleship sushi) was invented about seventy years ago at a popular Tokyo restaurant called Kyubei. Chefs wrapped nori around the rice, creating a boat to elegantly hold in place messier seafoods like salmon roe and sea urchin.

7. Inari-sushi, one of the few sushi that is fish-free, is a pocket of fried tofu stuffed with rice. It was developed in the late 1800s and was popular among vegetarian Buddhists in Kyoto.

8. Maki (rolled sushi), one of the earliest sushi, and the most decorative, first appeared in the Kansai region of Japan where fresh fish wasn’t readily available. Chefs in Osaka and Kyoto improvised by using local ingredients, such as plums and winter melon, and rolling everything into a sheet of nori.

9. While salmon sushi is popular in North America, only recently have the Japanese started to eat it raw. Usually it is grilled or salted—a holdover from pre-refrigeration days when freshwater fish were considered unsafe eaten raw.

10. The Kikkoman Soy Sauce Company was founded three centuries ago by Shige Maki and is still run by her descendants. Proper soy sauce etiquette: pour a small amount in a bowl, dip only one corner of the sushi, and consume the entire thing whole.

11. Pictured here is yellow-eyed snapper that looks like fugu (blowfish) but isn’t. A delicacy in Japan, fugu is illegal in Canada, probably because hundreds of amateur chefs die annually attempting to clean and eat the deadly fish. Fugu poison is 1,200 times more lethal than cyanide. The telltale signs you’ve ingested the poison include a tingling sensation in your toes, blue lips, paralysis, convulsions, and excruciating pain. Life expectancy is four to six hours.

12. Urban myth has it that 50,000 homes could be built annually from the amount of wood used to make disposable chopsticks in Japan.

13. Wasabi, that singeing-hot, green paste in the middle of sushi, is actually a root. The sharp taste results when the root is exposed to air. Traditionally, wasabi was cultivated in water on the shady side of mountain valleys. Most “wasabi” used today is a cheaper variation made of horseradish, dyed green.

14. A recent addition to the sushi plate, gari (pickled ginger) is meant to be eaten between mouthfuls as a palate cleanser.

15. Until the late seventies, North Americans were downright hostile to the idea of eating raw fish, and sushi chefs were forced to adapt to our meek palates. Inadvertently, this led to the most creative period in sushi history. Tojo, one of Vancouver’s top sushi chefs, was a key player in developing Westernized sushi. Among his greatest inventions is the Tojo maki, later known as the California roll (a combination of cooked crab and avocado wrapped inside-out to hide the nori). The California roll can now be ordered in Japan.

16. and 17. The shrimp-filled dynamite roll (16) and cooked salmon BC roll (17), both Tojo creations, cannot be found anywhere in Japan.