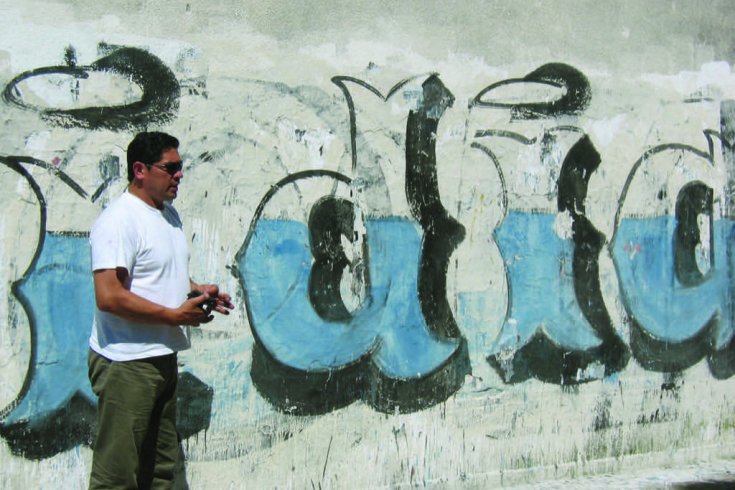 Buenos aires—Late last year, with Argentina’s economy continuing its rebound and the country’s Peronist president, Néstor Kirchner, staring down the International Monetary Fund (imf) over Argentina’s crippling debt, Justicialist (Peronist) party propaganda co-ordinator Carlos Luque sent word to his minions: it was time to hit the streets. The leftist ari party was smearing Presidente chamuyo (President bullshitter) over the walls of Buenos Aires, branding Kirchner as all talk and no action. Now, Luque ordered teams of young activists to deck the country with No al hambre de FMI (No to the hunger of the IMF) in support of their leader. The youths fanned out, aerosol cans in hand, spreading their message from the mountain towns of Patagonia to the jungle border with Brazil.

“Yeah, I’ve painted for Kirchner . . . the hijo de puta [son of a whore],” says Sergio “Nene” (Baby) Majon, glancing at an auto-shop door sprayed with Luque’s anti-IMF slogan. He hums a tango under his breath as he steers his battered pickup through the industrial parts of Buenos Aires. Each time Nene passes a wall bearing the name of a politician, he proudly lays claim to his work, or digs into that of his rivals. Graffiti is everywhere in Argentina—politics here is an art form: its canvas, the nation’s walls.

Nene heads up a team of professional mural painters in Buenos Aires. Unlike the party youth and volunteer writers who cover the countryside out of loyalty and enthusiasm, he is more of a graffiti mercenary. Although officially a member of the Radical Civic Union party, he has been paid to paint for the Peronists, unions, and others for over two decades. He sees politics the same way he sees soccer—you can play for as many teams as you like, but your heart is always with one.

At a railroad crossing in the middle-class Flores neighbourhood, he gets out of his truck and wades through knee-high weeds as battered trains roll by, finally arriving at a typical display stretching across twelve metres of wall near a grimy, white apartment building. Giant two-tone letters spell out Verde (a rail-union candidate) in different shades of black, with turquoise shadows that angle away from the bottom half of each letter. For this three-minute slapdash masterpiece, plus some 500 like it dotted along the city’s rail lines, Nene’s four-man crew received 4,000 pesos (roughly $2,000).

“President bullshitter” and other pointed barbs notwithstanding, the parties maintain a certain territorial decorum. Nene’s Radical party won’t paint near the Peronists’ offices and vice versa. Nor will opposition parties paint on Argentina’s congress building, “unless they pass a really bad law,” says Alfredo “Zoylo” Torres, the United Left party’s propaganda co-ordinator. “Then we’ll paint all over it.” Monuments, schools, and churches are supposedly prohibited but get painted anyway.

Nene, a six-foot-plus bruiser, says inter-party respect is essential because painting is dangerous work. It takes place late at night in dark corners of rough neighbourhoods. He’s been shot at repeatedly, has taken two bullets in his legs, and always works armed. Most confrontations have been with rival unions or extreme communist parties. “If they don’t respect us, we’ll go head to head,” he boasts. “We’ll take it into the ring and they’ll just disappear.” “Buenos Aires is a big place,” he adds ominously.

The marriage of power and paint in Argentinian politics traces its roots to the founding of the republic. Claudia Kozak, a communications professor at the University of Buenos Aires, notes in her book Contra La Pared (Against The Wall) that in 1840 exiled democrat and intellectual Domingo Sarmiento wrote “Ideas cannot be killed” in French along a mountain pass leading to the Chilean border. This is widely mythologized as the first graffiti on record in Argentina—an homage to the French revolutionaries Sarmiento admired. The scribbling became the stuff of legend when he returned from exile and became president of the country’s new democracy in 1868.

Juan Perón and his wife, Eva, brought political graffiti into the mainstream during the 1940s. Justicialism, the movement they founded, created a surge of paint-soaked activism across the political spectrum. The graffiti was sometimes incredibly nasty, and when Eva died of cancer in 1952 her detractors peppered the city with Viva el cancer. Juan Perón fled the country a few years later, sparking an intense painting campaign by Peronists that persisted through the 1960s. What began as Viva Perón grew into “Perón will return,” “Perón is returning,” and finally “Perón returns” upon his arrival back in Argentina in 1972.

From 1976 to 1983, a brutal military dictatorship clamped down on political expression and wall painters were punished with detention or beatings. When democracy was restored, graffiti was again everywhere. During Argentina’s most recent upheaval, the debt-default and currency-devaluation crisis of 2001, people who lost their savings sprayed banks with “Thieves, give us our money” and more colourful sayings like “Special of the day: Give us your US$ and we’ll give you shit.”

Technically, all the painting is illegal; Buenos Aires just increased fines for defacing private property. But no one seems to care. Professional painters are paid by taxpayer-funded unions and parties, and police just look the other way.

For mercenary painters like Nene, graffiti is both a way to make a living and a rite of democracy. Asked whether it is an artistic ritual, too, he shrugs his broad shoulders and asks, “What do I know?” He takes pride in the style he has developed over the years, but sees his murals whitewashed and painted over with each new election or crisis. “We are all paid professionals. No one will work or paint for free,” he says. Then he glances at a painting on a nearby garage door, pauses and, smiling, reconsiders. “It is a right. I have no other way to express myself.”

David Sax (@saxdavid) is the author of Analog: Real Things and Why They Matter  and The Future Is Analog: How to Create a More Human World. He writes for the New York Times and Bloomberg Businessweek.