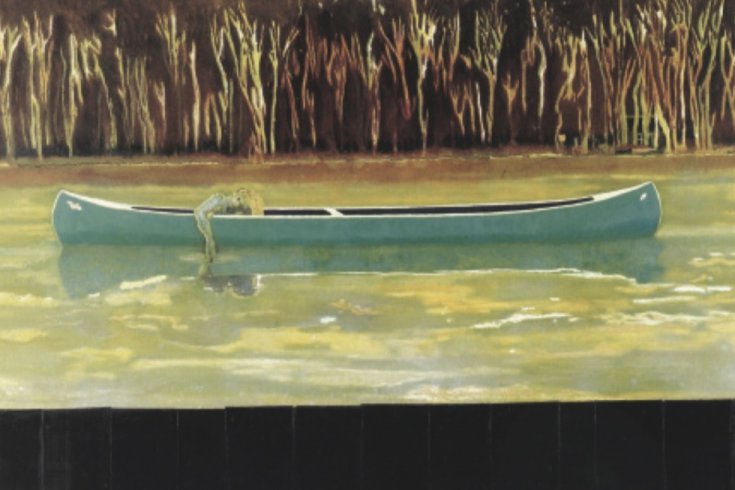 “Canoes have appeared a number of times in Peter’s work. He took the image of a solo figure in a canoe from the movie Friday the 13th, but when you look at it you immediately think of the painter Tom Thomson, who, of course, drowned mysteriously in Canoe Lake. In Peter’s Canoe Lake, there is the Canadian landscape but there are also references to cinema, photography, and music. In fact, in other paintings, the person in the canoe is Dwayne Allman, of the Allman Brothers Band, who died in a motorcycle accident.

“Connections between pop culture and the rugged landscape make sense. The Canadian wilderness is beautiful, sublime and all those things, but it’s also a disturbing place. I remember Peter once said to me, ‘I’m trying to find images that have some sort of resonance rather than meaning.’ So I think, in a way, he’s looking for mood. People have talked about a kind of hallucinogenic and drug-induced state in his paintings. But I think the general idea is that he’s looking for a mood that isn’t one of total tranquility and peacefulness; there’s always something else that’s disturbing.

“Peter is based in London, England, and in Trinidad, but a lot of his paintings are about his childhood. His family lives in the Northumberland area of Ontario, where he spent his formative years. Even though he often paints isolated figures within massive landscapes, the scenes are quite domestic, which fits into the idea of Peter working with what I call ‘mutant memories’—where things around him and his past memories of Canada, like backyard ice rinks and snowboarding, collapse or fuse into his canvases.

“Peter really loves looking at paintings by Tom Thomson—you can see bits of Thomson in his work, also bits of David Milne and Paterson Ewen. They’re part of his vocabulary. They have become embodied in him. He is defiantly challenging the styles of landscape painters. But I doubt he would have painted Canadian landscapes this way if he had stayed here. He’s not out in the woods painting; he’s working in his studio in London and looking back. There is a kind of sadness in that. London’s a very dense, urban environment, the opposite of Canadian landscapes.” 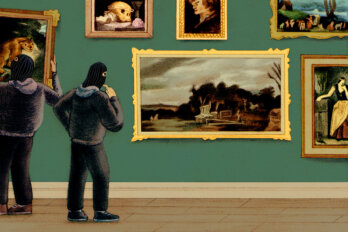