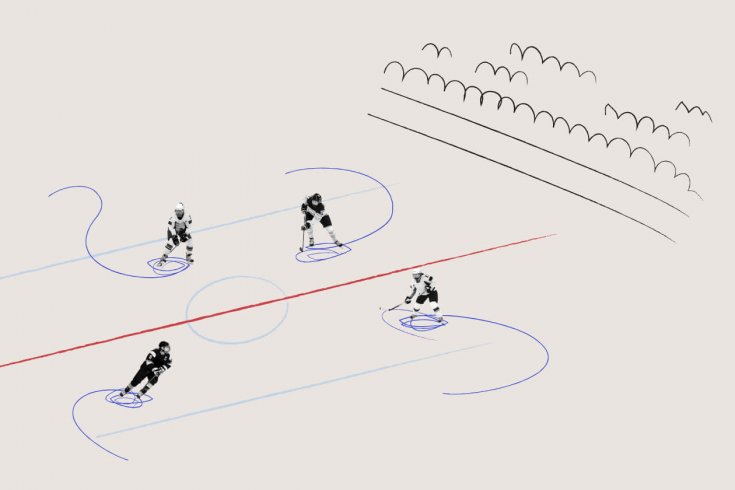 After the Canadian women’s hockey team lost the 2018 Winter Olympic gold medal to the United States, many people, including sports columnists and fans on social media, dissected the loss. They pondered whether the game should have been decided in a shootout and, also, whether Jocelyne Larocque was wrong to take off her silver medal during the ceremony. This level of scrutiny would have been nearly impossible twenty years ago when women’s ice hockey debuted as an Olympic sport. In the inaugural year, in Nagano, the Canadian team brought home a silver medal, losing to the US, its archrivals. (Canada’s women’s ice hockey team has won four Olympic gold medals; the US is now at two.) But, back then, fewer people watched it unfold live—likely in part because of the time difference, and also likely in part because 1998 was the first year that women’s hockey was an Olympic event.

Since then, however, the attitude toward women’s hockey has shifted for the better. The sport is now more popular—US viewership from this year’s live gold-medal game, which started at 11 p.m. EST and finished after 2 a.m., sat at 2.9 million. In Canada, we have boosted high-level funding for individual athletes, including from Hockey Canada and initiatives such as the Own The Podium program, established in 2004 to help fund sports in which Canada was more likely to produce a medal. Sami Jo Small, a women’s hockey Olympic gold medallist and former vice-chair and cofounder of the Canadian Women’s Hockey League (CWHL), says that we have one of the highest budgets in the world for women’s hockey at the national level.

But if we want to keep calling ourselves a Hockey Nation (despite the hiccup at this year’s Winter Games), we need to pay more attention to women’s hockey in non-Olympic years.

After all, it isn’t as if these women will stop playing hockey after Pyeongchang. Following the games, many of the Olympic athletes will return to their respective teams in the CWHL, which was founded as a not-for-profit organization in 2007. In terms of media attention, fans, and funding, the women’s seven-team professional league pales in comparison to the Olympics. While it’s true that, this season, Sportsnet has committed to airing four regular season games live, in addition to the end-of-season Clarkson Cup Final game on March 25, that pledge is less exciting when one considers there are a full ninety-eight games in the 2017/18 CWHL season. As we lurch into the start of a four-year dearth in serious coverage of women’s high-level hockey, it’s worth asking: Why should the same sport get any less attention during the regular season than it does at the Olympics? And, more importantly, in a time when we’re increasingly talking about women’s equality, what can we do to fix it?

The CWHL is composed of four Canadian teams; one team from Boston; and two teams from China. Going to a CWHL game is not the same as going to an NHL game or even an Olympic game. Yet, in many ways, the biggest difference is arguably not game quality (which is consistently high), but crowd energy (which is consistently low)—something that often says more about the perception and knowledge of women’s hockey than the sport itself. A typical game for the Montreal Canadiennes women’s team, for examples, draws only about 1,100 people, and even this low attendance is often better than the draw at a Toronto Furies game. I watch my home team, the Furies, play at the Mastercard Centre in Etobicoke, a region in Toronto. The pace of a Furies game is always fast, front-row seats are easy to come by, and the players hang around after the game to sign autographs. At the same time, the venue is small and not easily accessible to all Toronto fans. Watching a game there just doesn’t have the same buzz that a game at the Air Canada Centre does.

But it doesn’t have to be that way. When teams are able to play in large venues, more people do attend and crowd energy swells. In 2016, Montreal’s CWHL team drew 6,000 fans for a game at the Bell Centre, and last year’s CWHL all-star game at the ACC drew 8,100. During the run-up to the Winter Olympics, a nearly sold-out crowd in Edmonton, of more than 17,000, watched as Canada’s women’s team beat the US in the last of a six-game exhibition series.

Of course, it isn’t just a venue problem. Women’s hockey also has to contend with the league’s overall market strategy—not to mention with the funding for the players themselves. CWHL players don’t make a living wage through hockey and many games are scheduled on the weekends so as not to conflict with a player’s potential workweek. This season marked the first ever that players in the CWHL began to draw salaries, between $2,000 and $10,000. And, although that’s an improvement after more than ten years with no salary, that kind of money would not, in truth, cover even one NHL player’s equipment costs for a season.

For that matter, it doesn’t even cover most CWHL players’ expenses. As one CWHL player, Hayleigh Cudmore, told the Toronto Star: “We still pay for equipment. We still pay for skates. We pay for parking at the airport when we have to go fly every other weekend. We pay for food on the road.” And ongoing funding for salaries is far from guaranteed. After all, the four-team National Women’s Hockey League (the US equivalent to the CWHL) began paying its players a minimum of $10,000 apiece in the 2015/16 season, only to later cut their salaries by nearly 40 percent, citing financial concerns.

Then, there is still the challenge of perception. Last year, the University of North Dakota announced the end of several sports programs, including women’s ice hockey (the men’s hockey team was not cut, unsurprisingly). “You can’t aspire to be what you can’t see,” Brian Idalski, the former North Dakota women’s coach, later told the New York Times. Because the cuts complied with Title IX, little could be done to reverse the decision, despite significant protest. The timing seemed especially tone deaf: days earlier USA Hockey had signed an historic agreement for better pay and benefits equal to the male players, putting an end to the national team’s boycott. Meanwhile, the UND women’s team, which has rostered at least twelve players who went on to become Olympians, was done.

The move acts as a reminder that some people still think of women’s hockey as a boutique sport. Until recently, women were largely not only discouraged from playing but were often ridiculed for thinking they could do so. In fact, the city of Toronto only changed its guidelines to ensure equal ice time for girls’ hockey leagues less than a decade ago. Meanwhile, countrywide amateur female hockey registration in Canada has increased from 9,000 players in 1998 to just over 85,000 in 2010, the most recent year for which data is available. While the growth is both impressive and encouraging, it is nowhere near the number of boys who play.

Women’s hockey is a different game than men’s. It’s fast, largely because there isn’t as much hitting to slow the play down. While bodychecking is not allowed, many players will tell you that they “play the body” not the puck. In other words, they impede their opponents with their bodies without actually making a direct hit. But the game also requires highly skilled players. Women rely on greater agility and finesse to compensate for the reduced hitting. Just like in men’s hockey, shots on goal are hard and fast and often find an opening that the viewer didn’t even know was there. Games are likewise full of exciting, high-stakes moments—take, for instance, Canadian captain and forward Marie-Philip Poulin’s incredible shot into the top-left corner of the net to take the lead in the round-robin game against the Americans during this year’s women’s Winter Olympic hockey.

Sami Jo Small often says that women’s hockey will have made it when someone writes something negative about it—that will mean the game is taken seriously. “In the beginning of my career,” Small says, “News article were like, ‘Oh great, she plays hockey, she can take a slapshot.’ [But] now, fans know whether a players’s had a good game.” Small recalls that, a few years before she joined the national team, Manon Rhéaume, who would go on to goaltend for Canada’s Olympic women’s hockey team and was the first ever female goaltender to play in the NHL, was asked to do a photo shoot with Playboy (she turned it down). So when the media engages with the sport in a more critical way (think: debating shootouts in gold-medal games), it’s actually progress. While overall perception of the sport remains a problem, there’s been a shift in how we view women’s ice hockey—at the Winter Olympics, at least.

Deirdre Norman is the former assistant general manager and game-day manager of the Toronto Furies, as well as the founder of women’s hockey organization the Women of Winter. She says that we need to stop approaching the CWHL with a “bake-sale mentality.” The CWHL markets the league as having “good role models for girls,” so that younger fans will see that they, too, can be athletic and skilled and still be a girl. The NHL doesn’t rest the bulk of its marketing on having good role models, so why does women’s hockey? Jocelyne Larocque’s decision to remove her medal after it was placed around her neck shows that women don’t always conform to stereotypes—but they can still be great athletes. She made a choice in the heat of the moment, one that she would probably take back if she could—but does that make her any less of an outstanding hockey player? Absolutely not.

It’s time to move past marketing female hockey players with the same stereotypes that are too often used to characterize women in general. Instead, let’s promote what the sport has to offer. The opportunities here are tremendous. Growth in the sport of women’s hockey could mean league games that boast attendance in the thousands, it could mean Canada can better defend its reputation as a Hockey Nation, and it could mean another step towards a country whose values stand for, as Tessa Virtue put it in a pre-Olympic press conference, “unity, diversity, fairness and inclusion.”