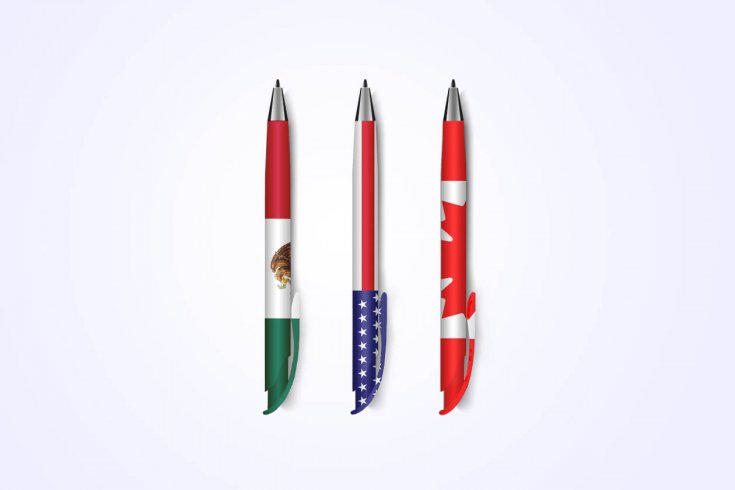 On September 30, 2018, shortly before a midnight deadline, Canada, Mexico, and the United States announced that they had agreed to a replacement for the twenty-four-year-old North American Free Trade Agreement, which Trump had declared the “worst trade deal in the history of the world.” Prime Minister Justin Trudeau and Canadian foreign-affairs minister Chrystia Freeland immediately declared the revised NAFTA deal “a victory.” Parties are expected to sign the new trilateral pact by the end of November, after which the US-Mexico-Canada Agreement—or USMCA—will be submitted to US Congress for approval. The Walrus asked five trade and industry experts for their reactions to new accord and its implications for Canada.

—professor, Department of Political Science, University of Lethbridge
Canada’s foreign-trade policy is very incremental. The new trade agreement is a continuation of this strategy. It isn’t a progressive agreement in terms of changing rules-based language on anything significant. Nor is it profoundly transformative. I have a lot of respect for the Canadian negotiators. They’re very professional. They did a very good job pushing right to the very end and keeping the things they thought were priorities. What’s concerning to me, though, about the new agreement isn’t so much issue specific but rather how the agreement unfolded and what it means for Canada’s future trade negotiations.

I was a graduate student when NAFTA was negotiated, and the same things that were discussed back then—how to protect US jobs and interests—are still being discussed now. That protectionism is still bubbling under the surface. The US and the Trump administration did a great job of tapping into those sentiments and setting the parameters of the negotiation before it started. This was a defensive negotiation from the get-go for Canada; there was no real room for us to pursue offensive interests. For me, that’s the bigger concern here: we were negotiating from a defensive position from the outset. We can’t allow it to set the tone for how we’ll go into these agreements in the future.

—founder and managing lawyer, Ackah Business Immigration Law
As a corporate immigration lawyer, I’m pleased that the new USMCA trade agreement addresses temporary foreign workers in all three countries. It essentially continues the work-permit system under NAFTA. I’m disappointed, however, that the list of professions under the agreement—there are about sixty-six on it—wasn’t updated in the USMCA. It has not been updated since 1994. This list includes occupations like doctor, lawyer, scientist, accountant, economist, and teacher, but it does not include any professions in today’s software and technology industries, which have made up the majority of emerging markets over the last ten years. The USMCA didn’t make any changes at all to the list. I understand the importance of dairy, lumber, and steel, absolutely, but discussions of human resources and human capital shouldn’t be kept on the sidelines when they are so critical to the economic expansion of Canada.

Long term, this could surely limit us. As a country, we’re trying to attract people and businesses in high-tech industries—including in many professions that didn’t exist in 1994. Not including their job titles in the “professionals” listing doesn’t make their entry as temporary workers very easy. While we could often find a way to work within the NAFTA list by being creative, it could get harder and harder as professions keep changing. We may continue to lose out on highly skilled people or otherwise delay their ability to get started on contributing to Canada and to our economy. Then, speaking of emerging industries, there’s also cannabis. What can we do to ensure US immigration recognizes this is our law in Canada and it isn’t offside for people in the industry to cross the border for meetings? This has yet to be resolved, but it’s certainly something we should consider going forward, especially as the industry grows.

New rules tie the hands of governments hoping to better regulate in the areas of chemicals, food safety, and cosmetics. Canada’s supply managed agriculture sectors—in which supply is targeted to Canadian demand in a way that guarantees fair incomes for farmers and fair, stable prices for consumers—will lose market share to new US imports and therefore come out much worse. Provincial liquor policies that favour local wines will be banned. And US pharma won additional monopoly protections for biologic medicines—protections demanded by Republicans. Weirdly, Canada even gave the US a veto of sorts on any future trade deal with China—a capitulation to Trump’s MAGA view of the world.

It’s not all bad news. We can get behind a much better carve out (protection from trade challenges) for policy upholding Indigenous rights. While it remains to be seen if it has teeth, a new labour chapter could support needed proworker reforms in Mexico. And USMCA puts an end to NAFTA’s antidemocratic investor-state dispute-settlement system (ISDS). Not to be confused with NAFTA’s Chapter 19, ISDS allowed investors to sue Canada when public-policy choices, laws, or regulations (like denying approval for a damaging mining project) hurt their profits. As the most sued country in North America under this process, Canada can feel good that ISDS no longer exists in USMCA.

But, in general, Trump comes out on top while Canadian business will live with status quo access to the US market. The threat of job-killing tariffs on autos has receded, but steel, aluminum, and other strategic goods remain at risk. This is not a terrible outcome, but it’s not a good one either.

—professor of law, University of Ottawa, and senior fellow, C.D. Howe Institute
The new trade agreement is a “win” for Canada, given the stark alternative: no agreement at all and devastating tariffs on autos. Continuation of NAFTA is critically important for our country’s economy. In the past few weeks, much of the focus was on specific issues such as dairy, Chapter 19, and culture. But, frankly, those issues are small when considered in light of the overall trade relationship between the US and Canada. Dairy, for example, is less than 1 percent of trade. In the end, what is important is the new agreement’s effects on the economy and consumers.

The USMCA is a very lengthy, complex agreement, so there’s much to review and consider. The major takeaway is that the agreement preserves and maintains NAFTA. However, it does not appear to be a significant improvement over NAFTA. Canada won the hard-fought battles to maintain Chapter 19 and the supply management system (allowing minimal greater access for US exporters to Canada’s dairy market). But forward-looking proposals made by Canada—such as promoting a progressive trade agenda—unfortunately were not adopted. Still, the fact that there is a trilateral agreement is in itself a victory. Properly implemented, the USMCA could bring predictability, stability, and security to trading relations in North America.

—vice-president, Dairy Farmers of Canada
The new trade agreement is a pretty devastating hit for Canada’s dairy industry. We’re very disappointed. It will eliminate Class 7, a price structure that applies to ingredients such as protein concentrates, skim milk, and whole-milk powder and was introduced last year to help address a surplus. Without Class 7, we won’t be able to fully pursue the Canadian market. It will shrink our industry. There has been no real acknowledgment of that.

The deal is being positioned as a good one for Canada, with small concessions to our dairy industry, but the way I see it, the deal will make it more difficult for us to grow the industry. What about the young families who are looking to be the future of our industry? We estimate that, with the cumulative impact of previous trade deals, total imports will now make up 18 percent of dairy market—a loss of $1.2 billion for farmers every year. This deal makes it impossible for us to compete in our market.

I don’t think any of this is a good thing for consumers either. We understand what is important to our consumers in Canada. Canadians consumers care how their food is produced. In Canada, for example, we do not use the growth hormone rBST, but they do use it regularly in the US. The hormone is meant to increase the milk production of every cow. Farmers here don’t want to use it because we don’t think it’s a good thing—and even if it were used, we also know that Canadian consumers don’t want it in their milk. But, soon, we’ll be getting more milk in from the US, and isn’t like the cartons will all have a US flag on them. How will Canadian consumers know what they’re getting? Certainly, going forward, it’s going to become even more important for us to clearly identify our products as Canadian. 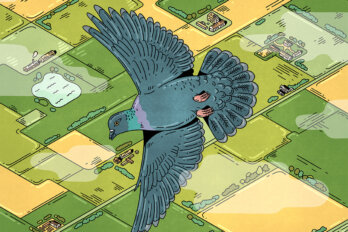 The Pigeon Puzzle: How Do They Figure Out Their Impossibly Long Routes Home?