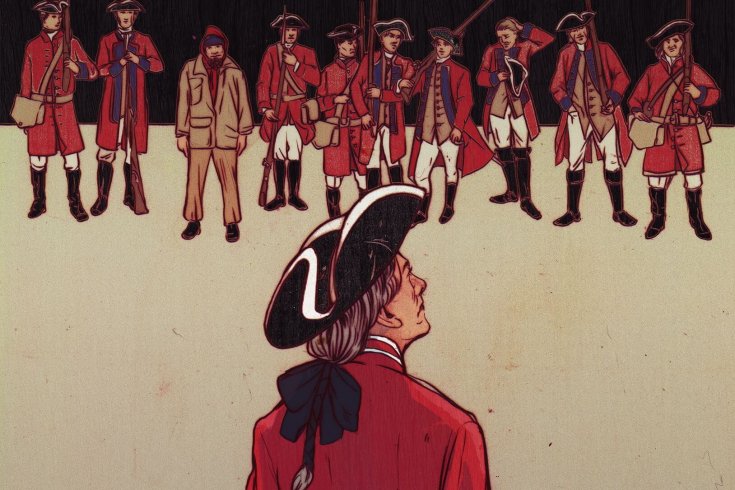 In high school, I never paid much attention to lessons on the Battle of the Plains of Abraham. Perhaps I should be ashamed. I am, after all, the daughter of two people born and raised in Quebec. And so, in theory, the battle in which the British beat the French and that, ultimately, led to the end of French rule in Canada should be foundational to my existence. But if you were to ask me to describe it to you, the year 1759 would rise easily to the surface of my mind, and that’s it: the date is all that I remember.

So, for the first forty or so pages of Kathleen Winter’s new novel, Lost in September, the main thing I felt was bewilderment. The book, which is obsessed with the history of the Seven Years’ War in Canada, is centred on “Jimmy,” an itinerant figure who, in 2017, lives in a tent in Montreal’s Mount Royal park. He also claims to be the English general James Wolfe— the same James Wolfe who, at just thirty-two, led the English to victory at the Plains of Abraham and ultimately died there, felled by three musket balls.

The novel is not quite historical fiction it’s more of a historical ghost story. Jimmy insists that each September, he is doomed to wander Quebec in pursuit of an eleven-day military leave that the eighteenth-century Wolfe, for complicated reasons, never got to take. We meet a homeless woman named Sophie, who might be called Jimmy’s boon companion, as she hoards Habitant soup cans and makes knowing references to poet William Wordsworth and his sister, Dorothy (“Always wanting picnics”). We follow Jimmy to Costco, where he buys knackwurst and muses about how strange the surroundings look to him. (Everything there is large, “even the people, their bodies sluggish and distended.”) These passages can be sharp and observant.

But mostly, Jimmy stumbles through the world in a daze. He tries to convince others of his true identity: during a trip to Quebec City, he critiques the inaccuracies of battle re-enactors at the Plains of Abraham; he approaches Genevieve Waugh, a writer researching Wolfe at the library, and tells her she ought to get the story straight from “the horse’s mouth,” i.e., from him. He also frequently lapses into the portentous cadences of the eighteenth century— “Land, wind and clouds were present before our carnage, and after it they continue to lie, proper” is the sort of thing he’s prone to say to himself in his daydream state.

There are occasional displays of novelistic intelligence in Lost in September, hints that Winter has a careful read on the disintegrating psyche of her protagonist. Jimmy’s letters to “his mother” (meaning James Wolfe’s long-dead mother), for example, allow us a glimpse of Winter’s complicated grasp of human relationships: “Knowledge is healing, Sophie says, but I do not think all knowledge helps mothers.” But such flashes of clarity are brief. Most of the time, Winter gives up on plot and leads her reader around with Jimmy’s dream logic. And other people’s dreams are rarely interesting.

What Lost in September seems to really be about— though it’s not clear if it knows this— is the anxiety that leading Canadian cultural figures sometimes have about the history of our country. You know the old complaint: Canadian history is boring. It just doesn’t live in the way the histories of other countries do. Occasionally, our artists— novelists, in particular— get the notion that they’d like to change this. I sometimes think they look across the ocean and see a writer like Hilary Mantel readily equipped with Henry VIII for her Wolf Hall trilogy— a character as ruthless and ribald as any screenwriter could ever want a villain to be. Or they look south, where George Saunders gets to chronicle Abraham Lincoln, one of the great flawed moral authorities of the nineteenth century, for Lincoln in the Bardo. Canadian novelists notice this and think to themselves: I’d like to do this for us.

It’s not that they haven’t diagnosed a real problem. Canadians, after all, aren’t convinced that we are exceptional. We aren’t romantics. We don’t have many capital-H heroes. Our instinct is often to puncture rather than to revere. And perhaps that’s why a reader like me can’t help but look at Winter’s reverence for Wolfe and wonder: Is there really something so unqualifiedly heroic about him? Is it a good idea to pretend that there was? Wolfe’s triumph at the Plains of Abraham was not a victory for divine justice; at best, it ushered in some 200 years of argument about how the English ought to manage the French who already lived here. You don’t have to be glib about the sacrifices of young men to wonder if, indeed, the cause that they sacrificed themselves for was, ultimately, worth it.

But this question of larger political importance is given only the most cursory of glances in Lost in September. There is no geopolitical context for war in the world of this book— the French are French, the English are English, and Indigenous peoples get barely a mention. The focus is squarely on the individual soldier’s experience of war, denuded of any specificity whatsoever. The experience of all soldiers is simply presented as universal, right down through the ages. When we are finally given Jimmy’s real backstory, for example, we learn that he served as a solder in a modern-day conflict. He wonders if he shares with Wolfe “that yearning all soldiers like me feel to act, to matter, to make even a tiny bit of difference in this world?” But soldiers often have little control over what they are fighting for. And is the “difference” that Wolfe himself can be said to have made in Canada— making it “English not French” as we are told in the opening of the book (in italics, so we won’t miss it)— really so satisfying?

Another sort of book might have carefully considered such questions. Specifically, a true historical novel could have been up to the task. In Lost in September, however, there is something of a cop-out in the way it gives us James Wolfe only through the lens of Jimmy. Granted, it isn’t trying to be Wolf Hall or Lincoln in the Bardo. But, as a result, everything that Lost in September does tell you about Wolfe is delivered through a haze of prose, and no actual figure ever comes into clear focus. The romanticization of war and soldierhood is given primacy over the depiction of real human experience. Of course, even the most detail-oriented, wonky sort of historical novel can be accused of anachronism, but Lost in September seems to go beyond that. It seems to say that since getting to know the so-long-dead Wolfe is impossible, the only thing to be done is elevate him to hero status and revere him accordingly.

This latter problem is an issue that Winter seems to acknowledge. In a somewhat too-direct metaphor toward the end of the book, Genevieve Waugh recounts her visit to a handwriting expert, who starts to tell her how it might look to compose in someone else’s hand. “If you try to forge, you write more slowly,” he tells her, “like following in someone’s footsteps. There are, therefore, tremblings, or breaking-points.” Which raises the question of whether all the pages of Lost in September, about the fields and the battles and the rampages and the stiff red coats, were really much more than Winter drafting a borrowed story with different colours of ink. The final result may be aesthetically pleasing to its author, but it lacks the heft of an original creation.

Michelle Dean is a Los Angeles-based critic and journalist whose work has been published in the New York Times Magazine and The New Republic. Her first book Sharp:The Women Who Made an Art of Having an Opinion, will be published in 2018.
Maria Nguyen

Maria Nguyen is a Mississauga-based illustrator and designer. Her work has appeared in the New York Times and the National Post.