The Pleasures, and Dangers, of a Fully Personalized World | The Walrus
Skip to content 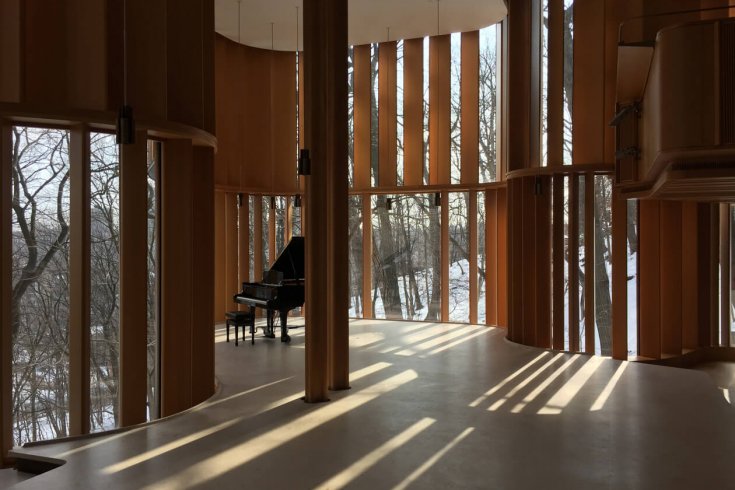 Joseph Clement first encountered the Integral House in 2008. He was working as a landscape architect in New York City when Brigitte Shim, a well-known Canadian architect, stopped by his firm’s office to show off a new project she was working on. Because Clement, like Shim, was from Toronto, his boss invited him to take a look. Shim flipped through images of the house: two-storey windows that were straight but, because of their intricate design, looked curved; a performance space outfitted to look like the inside of a musical instrument; a swimming pool that could change from indoor to outdoor by virtue of a lowering glass wall. Everything in the house was customized, Shim explained, from the door handles to the light fixtures, and the building would seamlessly integrate with the deep ravine that it overlooked. The project was a celebration of mathematics, music, and art—and though nobody knew it at the time, it would become one of the most important pieces of modern home architecture in North America.

As Clement looked at Shim’s images, his spirits sank. Shim explained the scope of her work—heading an architectural firm with her partner, Howard Sutcliffe—and Clement couldn’t help but feel unsatisfied with landscape design. “I got this feeling like, “What am I doing with my life?’” After she left, he returned to his desk and began to research MFA programs in Toronto.

Clement wouldn’t come across the Integral House again for another three years, during which time he left New York and earned a graduate degree in filmmaking from OCAD University. Then Shim and Clement ran into each other at an architectural exhibition in Toronto in 2011. He had accepted an invitation from his university advisor; she had come to congratulate her former employer, whose work was being shown. Clement told Shim that the early designs he had seen in New York had inspired him to become a documentary maker. Delighted, Shim insisted he come visit the house, now finished, and meet the owner, a Canadian professor known for being the most published mathematician after Euclid.

Jim Stewart’s calculus manuals, which he wrote while teaching at McMaster University, are the best-selling math textbooks in the world. They are easily recognizable by the large “S” symbol featured on every cover—representative not only of the name “Stewart,” but also of the integral sign in calculus, and of a violin’s curved sound hole. Stewart was an avid supporter of the arts and an accomplished violin player; he was fascinated by the interaction between beauty and numbers. Having dedicated his life to the instruction of mathematics and appreciation of the arts, Stewart imagined two legacies for himself: his series of textbooks, and the Integral House. In the late 1990s, he hired Shim-Sutcliffe Architects to design this second piece of heritage. They worked on it for the following fifteen years.

Soon after meeting Shim at the exhibition, Clement visited the home in Toronto’s affluent Rosedale neighbourhood. “I was blown away,” he remembers. He immediately decided to create a documentary about it. That film, years in the making, premieres this week at the Hot Docs Canadian International Documentary Festival.

Integral Man tells the story of Stewart’s life, which ended in 2014 shortly after he was diagnosed with cancer. The final product is a kind of elegy for both Integral House and its creator. Those who knew Stewart and his home will appreciate scenes of the mathematician playing his violin in the house’s concert space, or long shots of him walking up and down stairs. For casual viewers, the documentary appears to be either an ode to a late Canadian mathematician and his intricate home or a pleasant slideshow for architecture aficionados.

If you understand the context, however, the documentary is a small part of a greater story. Clement and his crew spent years working on Integral Man. The filmmaker was as consumed by his interest in Stewart’s Integral House as Stewart was by his love for mathematics. While cinematic shots of the same house from different angles flicker by, viewers are invited to delve into this obsession—to be as fascinated with the details as Clement clearly was.

In this way, Integral Man is similar to the house it examines. The Integral House meant a great deal to a small number of people. More than most architectural projects, the building seemed to foster a sense of community among those even marginally involved in its creation—from the architects and the documentary maker to the real estate agent (who coincidentally studied under Stewart at McMaster, decades ago) and the caretaker (who knew Stewart’s family and stayed in the otherwise empty house long after his death). “It had this kind of effect on people,” Clement says. “Many people went there, lived there, performed and partied in that space” when Stewart was alive. But the house was a “physical manifestation of [Stewart’s] personality and sensibility”—and now that he’s gone, it is inscrutable to the uninitiated.

Stewart’s interest in numbers was interdisciplinary. As a young man, Stewart struggled to decide whether to become a mathematician with a passion for music or a musician with a mathematical hobby. (Wisely, he chose the more lucrative option.) Stewart often raved about the beauty of numbers, but like most academics, he struggled to make his passion digestible for the general public. The notion that math is “beautiful” and omnipresent is romantic and largely accurate, but rarely is this truth as accessible as it’s made to seem. Few people look at a flower and notice the formula of its symmetry; they just appreciate the final product. Therein lies the appeal of the Integral House: here is a building purposefully built to flaunt its mathematical structure. The calculations used have both form and function. Thanks to Stewart and his architects, every aspect of the building is obtusely mathematical. Few projects are so proudly niche.

Indeed, everything in the Integral House was perfectly suited to the millionaire mathematician’s fancy. Electrical outlets were hidden despite the inconvenience because, according to Shim, Stewart “had a disdain for them.” Concepts were constantly tweaked, the location changed a few months into initial construction, and the house nearly doubled in size throughout the design process. Shim and Sutcliffe are known for working on few projects at a time, for years at a time, while building close relationships with their wealthy clients. The Integral House ultimately cost $34 million to construct.

So, what happens when a Renaissance man spends a decade and a half building himself a perfect haven of oak and glass, and then dies sooner than expected? The Integral House was never designed for resale, and it’s worth much less to someone who doesn’t appreciate math, music, and art. Custom houses are notorious for being hard to sell—a Maltese palace with a second-storey floor made of glass, for example, faced challenges because, as the agent in charge of the sale explained, “you can see under skirts, so maybe the future owner will have to put up a warning at the entry.” Paul Maranger, one of the Sotheby’s agents who handled Integral House after Stewart’s passing, warned that it would take some time to sell because any new owners would have to settle for a home where “every square millimetre is customized.” When we spoke last year, Shim told me the same thing.

A wealthy Toronto couple finally bought the place a few months ago, at a significantly lower price than the original ask—and less than half of what Stewart paid to build it. Over-personalizing your artwork exposes you to the danger that no one else will value it quite as much.

The same is true for Clement’s documentary, which is as mesmerizing, personal, and expensive as its architectural subject (the film team never came close to covering the whole cost of production). On the surface, Integral Man focuses on the obvious: Stewart was a great man, with a great house. It’s the kind of movie that will be appreciated most by those who are already familiar with its topic, which means it risks being wasted on the majority of its audience. But the story behind the documentary is what makes it especially interesting. Clement and Shim, for example, continue to socialize after those two chance encounters, and they’ve kept in touch throughout the entire documentary-making process. Look at Integral Man as one subplot in the greater “story of the Integral House,” and it becomes a fascinating look at art, obsession, and the insurmountable challenges of making the deeply personal universal.