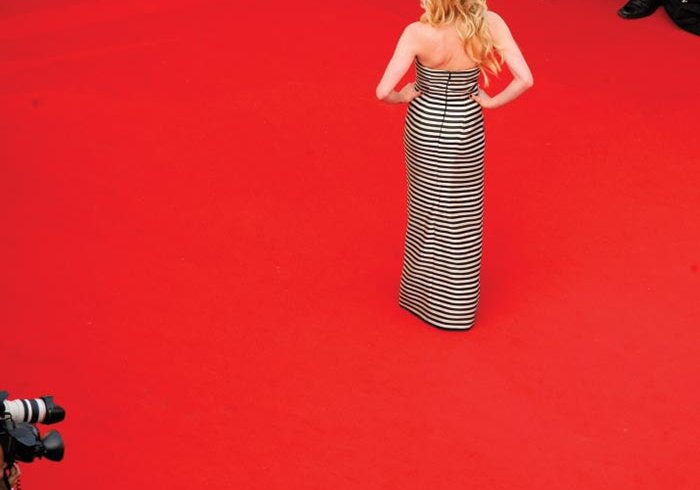 Avril Lavigne arrives for the screening of Over The Hedge during the 59th International Film Festival in Cannes, France. / Benainous-Pool (SIPA)

So far, my saving grace in Cannes has been a book. In a strange way, this film festival is about reading: multilingual subtitles, the industry dailies “great glossy gobs of print that arrive at your hotel fresh, like croissants, every morning” and endless PR. The paper drifts about like fake movie snow. Factor in the neurological overload from watching three or four films a day and pretty soon you begin to feel like a microchip. I found the slow lucidity of my book, Solo Faces by James Salter, a refuge. I sipped it like a drink. Drinks I don’t sip, although Cannes is one place where you can grow weary of champagne.

You do a lot of walking in Cannes, up and down La Croisette, between the hotel and the screenings at the Palais des Festivals. The walking is good—it feels almost normal, pushing through the glam hordes, every year more impossibly tanned, shod, sheathed, un-dressed, upwired, tattooed, and incredible looking, almost to the point of repulsion. But it’s the pencil-thin old dames that always get me—the two elderly Cannoises clinging to each other with canes, moving along the Rue d’Antibes, wearing wraparound Chanel shades with the logo in diamonds, in perfectly tailored jackets that sit on them like scarecrows because their bodies are disappearing. All the women in town, it sometimes seems, are already starring in their own movie. My favourite Cannes woman is the one-armed platinum blonde in the Jayne Mansfield sundress, who sells tickets to the gilded carousel on La Croisette.

Then there are the skin creams. The vast pyramids of anti-cellulite products in the French pharmacies, a world unto themselves with their ziggurat shrines to produits pour la peau. The fantasy of attainable beauty is parallel to celebrity worship here. Striving is in the air, like cigarette smoke in the bars.

Years ago at Cannes, the late Globe and Mail critic Jay Scott was walking along the Rue D’Antibes with publicist Maureen O’Donnell. “Cannes always makes me feel like a wallflower at a high-school dance,” said O’Donnell. “Yes,” said Scott, a festival veteran. “It always does. And it always will.”

So it was a good antidote to see a staged interview with American actress Gena Rowlands, now in her seventies, at the Actress Masterclass. Many young actresses, bold and burning with ambition, fought to get in the line to see the untamable star of 1970s classics like A Women Under the Influence, directed by her late husband, John Cassavetes. I lucked into a seat in the front row. Rowlands was also in Cannes because she wrote one of the eighteen beguiling love stories that make up the omnibus film Paris Je T’Aime, which screened here. Behind me was the young cast of the sexually graphic, seat-of-the-pants American movie Shortbus; they were there to hear anecdotes about Cassavetes, whose cinéma-vérité style clearly influenced their own film. The guys lolled about like puppies, kissing each other. A Cannes usher—the local equivalent of a US state trooper—had a firm word with my seatmate, who cradled a forbidden camera in his lap.

When press maestro Henri Béhar, in his usual black robes and silver cross, began to interview Rowlands, she looked unsure and glittery-eyed; she fastened her gaze on me, because I was closest. I smiled helpfully and maintained eye contact. It’s one of those little Cannes connections that would never happen anywhere else. Then she warmed up, as she talked about her husband’s improvisational style. “John wouldn’t let us talk about our characters with each other. He wanted it all to happen on film.”

What a dazzling spirit she is on stage, open but wily. She’s a broad-shouldered woman, dressed in black pants and white jacket, wearing many diamonds and smoky shades. That Rowlands head of floating blonde hair, champagne-coloured, her voice cigarette-flayed and drinkish. She seemed uncomfortable talking about herself and her past; she began acting in the theatre, had no interest in husbands, family, or film, but all that happened anyway. (“My master plan was so flawed,” she joked.) But Cassavetes, who began as a successful TV actor, just kept casting her and other members of their family in his films, which he sometimes edited in their garage. Gradually, she relinquished the theatre. “The thing about movies that is so fascinating is that you cannot think one thought without the audience knowing it. The audience knows almost more about you than you do yourself.”

Too bad Pedro Almodóvar never got to work with Gena Rowlands. I saw his new film, Volver, at an 8:30 a.m. screening, a preferred time slot because the world press has not yet become sweaty and redolent. Volver was popular with the critics and considered a front-runner to win the Palme d’Or, but in the end the jury, headed by In the Mood for Love director Wong Kar-Wai, awarded it to veteran UK filmmaker Ken Loach for his political portrait of Ireland in The Wind That Shakes the Barley.

I missed the Loach film, but I loved Volver, an abundantly warm story about a cast of women returning to family roots and buried family secrets. Almodóvar has also made Penélope Cruz into a very good facsimile of Sophia Loren, all curves and capability. She looks fabulous; no surprise there, but you can tell this is partly the result of the way Almodóvar dotes on her world- class cleavage, her neck, her eyes and lips. He makes women look absolutely scrumptious without diminishing or confining them—he liberates their beauty. When you look at the women in his films, young or old, and think about valiant Sharon Stone still having to cling to her crotch-flashing currency, you feel a bit sorry for Hollywood actresses. It has taken a gay male director from Spain to show us women of all ages who are warm, strong, passionate, funny, and carnal.

Compared to Almodóvar’s previous hit, Talk to Her, however, Volver meanders—or maybe that was me. The early-morning screenings are a good test of a movie’s power to transport a roomful of weary, semi-hungover journalists. This year over four thousand converged on this small town in southern France, all exuding subtle deadline panic. In fact, the only safe, relaxed place in Cannes is inside the darkness of a film that is beginning to work its magic. That is the comfort zone. Everywhere else is hustle and commerce.