Sleeping with the Movies | The Walrus
Skip to content 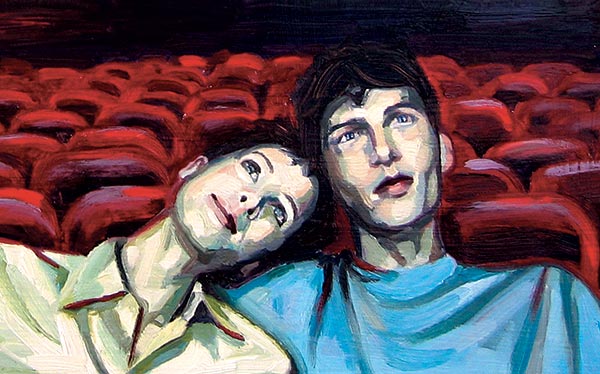 My first date was a movie date. I went to the Roxy theatre in Burlington, Ontario, with Clarence Stasila. He was tall, with a bit of a wave in his brown hair. I wore a full skirt with a Roman fresco pattern on it, and I carried a stiff, bulbous purse. I held it in front of me with both hands, to avoid the handholding dilemma. We were both in grade eight.

The Roxy was across from the lake, kitty-corner to the Dairy Queen. It had worn plush seats, and we sat near the back. The film was Cimarron, a western. I remember nothing. I think a woman wearing a bonnet cried a lot in one scene. On the way home, we ate a tin-roof sundae at the Dairy Queen. (I am, however, not 104 years old.) I passed the evening rigid with terror that Clarence might touch me, or might not. The whole point of going to the movies then was to sit side by side, in silence, inhaling pheromones and popcorn. Our absorption in the story on the screen was a shy, preliminary agreement to fantasize together.

Perhaps movies were invented partly as something to do on a date. But dating is out now, isn’t it? People do other things—they krump, they wild, they swarm, they hang out, they hook up. As more and more of us stay away from the multiplex, the movie date is going the way of celluloid and silver nitrate. The nervousness of sitting beside a stranger in a darkened theatre—that peculiar intimacy of opening up our imaginations collectively—is being replaced by the domesticity of watching dvds at home, on the couch. We hit pause, we hit mute, we make tea. We’re in charge of the spell-casting now. More and more, spending time in movie theatres is something we only do at film festivals. We binge and purge on independent cinema—rare as a snowy owl at the multiplex—then go back to our dvd wallow.

I’m not being nostalgic here, just forensic. I’m curious about what we’re losing as we settle into the digital age. Film is a physical medium, from the leviathan movie sets that devour city blocks with their trailers and thick cables to the real stunts done by real stuntmen, to the surprising weight of a 35 mm feature film in a can. Contemporary movies have less heft—literally.

Clarence didn’t last, but my somewhat conflicted relationship to the movies did. Despite being a diehard “print person,” I married a film buff (Brian Johnson, who is film critic for Maclean’s). We spend quite a bit of time sitting side by side, in silence, watching movies. At first I thought so much watching and not talking was usurping something more intimate. But now I’ve grown rather attached to this mute, mammalian activity, so akin to orangutan grooming. When we first lived together, he was not a film critic yet; he was a film driver, for the Festival of Festivals (as the Toronto International Film Festival was called then). His job was to race around the city double-parking in front of movie theatres, where he would schlep the metal film cans up stairs or fire escapes to the inner sanctum of the projection room. He was the cinematic version of the Pony Express, and I think he found it faintly glamorous. He would come home after a night of film-driving all sweaty and exhausted. It was partly the movies—the weight of them—that gave him good biceps (and then the movies took them away again).

But I was sleeping with the movies even before that. In 1971, I lived with friends in an old Victorian house on Spadina Avenue in Toronto. It became a way station for a number of writers, artists, draft dodgers, and dreamers. One of them was Martin Heath, a filmmaker, competitive cyclist, and genial madman who came over from England and moved into our basement. He arrived bristling with bicycle parts and laden with rare prints of classic films—The Rules of the Game was one, I think, and so was Yoyo. (Thirty-four years later, as owner of a Toronto performance space called Cinecycle, he is still surrounded by bicycle parts and film cans.)

From the beginning, Heath was the technical maestro of the Toronto film festival, the Oz behind the scenes, in charge of the health and well-being of the prints, which were stacked around him in tin towers. Wearing his white gloves, he has run frame after frame of movies shown at tiff through his own hands for the past thirty years. In his spare time, Heath devised a man-powered film projector that could be run by one person (that would be him) sitting on a bike, pedalling furiously. Bike wheels, film reels—I’m sure there was some primal proclivity there.

While the public perception of tiff tends to focus on the stars it attracts and the breadth of filmmaking talent it brings together, my earliest memories of the festival are of Martin, standing like a cobbler at his bench, as he inspected each print for flaws or faulty splices. This hands-on relationship to the corpus delicti of a movie evokes the relationship we all share with the movies—our desire to get closer to them, to melt into the screen. When Pauline Kael, film critic for the New Yorker, called her collection of reviews I Lost It at the Movies, the sexual subtext was intentional. We watch a film in the ever-youthful hope of surrendering to it.

The next time I cohabited with the movies was in 1973, when I was driving a van-full of them around the Maritimes. I was part of a group of foolhardy young women who organized the first international festival of films made by women. This ambitious ten-day event took place in Toronto, with a program of 182 films, a selection of which toured to eighteen cities across Canada. The films were wildly eclectic, everything from Nell Shipman’s 1919 silent film Back to God’s Country (screened with live piano accompaniment), to Triumph of the Will by Leni Riefenstahl. (Yes, women can be Nazi propagandists too!) We showed our strange and wonderful brew of films in St. John’s, Newfoundland, and Leaf Rapids, Manitoba, in school auditoriums and Quonset huts. We blithely screened Near the Big Chakra, a movie by Oregonian Anne Severson that consisted entirely of vaginas, and what vaginas they were. We projected a slide show about breast cancer that was hideously graphic, but educational. No one complained.

Several women from that group contributed to the birth of Toronto’s film festival. Anne Mackenzie went on to become its first managing director. Kay Armatage worked for twenty-one years as a programmer, helping to establish the festival as the best place in the world to launch a new film.

As for me, I remained a hard-core print person whose life continued to be framed by the movies, in one way or another. But I now find it almost impossible to watch a mainstream movie in a multiplex cinema. The minute someone tears open their Twizzlers, I glare at them and change seats. Sometimes this happens two or three times per viewing.

But I will still happily attend film festivals, where people chew quietly and pay attention to the screen. And the experience of watching movies at the Cannes Film Festival (to which my husband schleps me, just as he once schlepped film cans) can be exquisite. The prints are as fresh as sushi, the projection is flawless, there are no ads to sit through, and the person beside you might very well be Roger Ebert—and he will not be talking. Or eating. For one thing Ebert’s on a diet, and for another no food is allowed in the theatres at Cannes. Outside it’s a chaotic mob scene, but inside the Lumière theatre the worst thing that ever happens is when some dweeb critic with a light-up pen decides to take notes. Otherwise there is nothing between all of us sitting there and the movie on the screen. If the filmmaker is skillful enough, we get to surrender for a few hours, in the dark.

And even after twenty-eight years of marriage, when my husband and I leave the theatre, go to a bar, look at each other, and say, “What did you think?,” it’s still an open question. Movies may change, but our desire to relate through them doesn’t seem to be in any danger.

Marni Jackson is the author of four books, including Don't I Know You and The Mother Zone.
Heather Horton 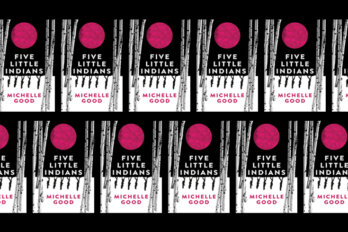