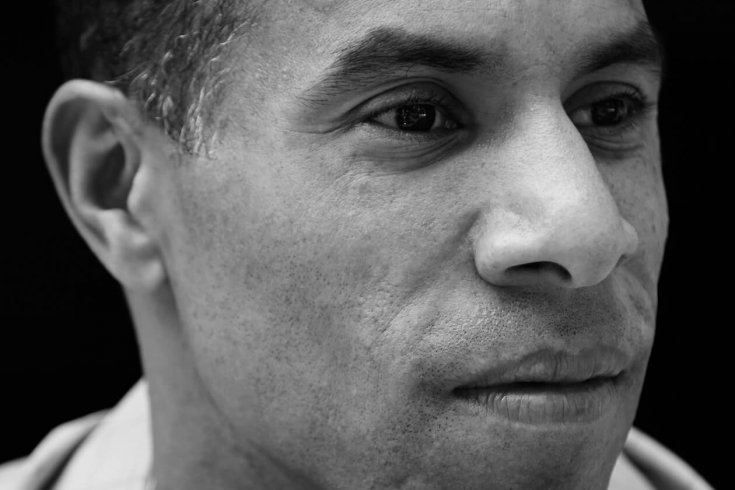 This is the new face of Hockey Night in Canada, the man who has inherited the mantle of broadcasting legend Foster Hewitt. “I don’t get crazy nervous, but this show is a big responsibility,” says the forty-five-year-old, who still counts three Wayne Gretzky rookie cards from his childhood among his prized possessions. “Hockey’s an insular game. You don’t want to look like an outsider.” The last guy, George Stroumboulopoulos, learned that the hard way.

To succeed where Strombo failed, Amber will have to do what every politician dreams of doing, but only his co-host, Ron MacLean, a former weatherman from Red Deer, Alberta, seems able to pull off: achieve universal appeal. He’ll have to reach the aging fan on the Prairies tuning in over supper, the urban millennial peering up at a big screen above a bar, the kid in the Maritimes pushing back their bedtime to catch the late-night game.

At the CBC headquarters in Toronto, the elevator rises toward the eighth floor, which is home to the Rogers employees who, like an occupying force, moved in shortly after the CBC lost control of Hockey Night in 2014. Their presence here is a reminder that neither the public broadcaster nor its most popular show is quite what it used to be.

The door opens, and staff make their way to cubbyhole-sized work pods—impersonal communal spaces meant to optimize efficiency while reminding everyone they’re replaceable. Amber’s assigned workspace is a drawer-less desk in an open work area. “I don’t even have a nameplate,” he says. He’s not exactly sure what happened to it. Maybe it was stolen. Or perhaps management moved it. Nothing’s permanent, except the show.

It’s been eighty-five years since Hockey Night—then called General Motors Hockey Broadcast—burst onto the radio. Sixty-four since it jumped to television. Eight since the CBC lost the theme song to CTV. Three since Sportsnet took everything else in a $5.2 billion deal with the NHL and initiated a series of changes that made everyone’s favourite hockey show look less like the cultural icon they’d grown up watching and more like some cold, bastardized version of ESPN Sunday Night Football.

The result has been called a disaster for advertisers, broadcasters, and fans. Some blame the Blue Jays for having poached viewers, while others point to the Canadian franchises—last season was the first since 1970 that no Canadian team made the playoffs. But even the Rogers employees working inside the CBC know what the critics say: that in their hands, Hockey Night became unrecognizable.

Amber spent three years as a rinkside reporter for the old CBC show before jumping to Sportsnet in September 2014, right after Rogers execs hosted an opulent launch party at Toronto’s Ritz-Carlton to show that Hockey Night had evolved into a crazy new product with a $4.5 million set. Sportsnet was going to maximize profits, appeal to a younger audience, and put hockey on more channels; it was going to introduce mics on players and cable-mounted cameras that darted over the ice. The old ways of watching the game would seem antiquated and stale. The pre-game shows would begin two hours before puck drop, and during every break, a panel of studio analysts would stand on a glowing floor and use interactive screens to dissect plays.

There would also be another change. Ron MacLean, who’d hosted for twenty-eight years, would be replaced by Strombo and relegated to a minor role, serving as a foil for eighty-two-year-old Don Cherry during short installments of Coach’s Corner before making way for yet another panel of insiders.

It wasn’t until the ratings had taken a nearly 30 percent dive that the senior vice-president responsible for hockey production at Sportsnet was fired. That was on April 5, 2016—two weeks later, The Hockey News reported that ratings had dropped by 61 percent in the playoffs. In fact, according to the research firm Numeris, the games barely cracked the list of top thirty shows in Canada.

Days after the Stanley Cup finals, Amber was called into a meeting and told that MacLean would be coming back the next year as host for the first half of the show, covering the 7 p.m. game from the Eastern Conference. Amber would take over for the late-night game coming out of the West. On the day Strombo’s departure was announced (along with the layoff of around a dozen producers and on-air analysts), Amber and MacLean were brought into the studio for a promo shoot. Then someone turned off the studio lights, and everyone ran away for the summer.

That was June 27, and Amber hasn’t been on set since.

The elevator pings for the tenth floor, and Amber heads toward Studio 41, which the organization bills as “the second largest purpose built multi-camera capable studio soundstage in Canada.”

He sips his iced coffee through a straw as he walks onto the set, which, though semi-dismantled, still looks more like the bridge of the Starship Enterprise than it does the modest creations the CBC once housed under a staircase in Maple Leaf Gardens.

To hear Amber tell it, his journey to this studio began in a TV truck on election night 1988, when he watched his dad, a former CBC executive producer, scramble through the organized chaos of that evening’s coverage. “That’s when I realized I wanted to be an anchor,” he says. He got his first break as a reporter and anchor in Sault Ste. Marie, covering everything from local crime to sport. A series he wrote, produced, and shot in homage to the Soo Greyhounds earned him a gig in Calgary with TSN. Poached by ESPN after the 2002 World Series, he relocated to an anchor’s chair in Connecticut, but came back to Canada for the sake of his wife’s career. Eventually, he found his way to Hockey Night, where he worked as a rinkside reporter while also serving as the regional host for the network’s Edmonton Oilers coverage.

It’s hard to consider Amber’s rise without thinking of his predecessor, Strombo, who was viewed as an imposter by fans, many of whom couldn’t get past his fashion choices. But he wasn’t the first host to have been unceremoniously yanked from the show. Scott Young (Neil Young’s father) was fired in 1959 after running afoul of the Maple Leafs organization. MacLean was twenty-seven when he inherited the show from Dave Hodge, whose sixteen-year stint came to an end in 1987 after he threw his pen in the air in frustration when the CBC cut away from a Habs game. MacLean may have been the most popular of them all, but that didn’t save him: in 2014, he was demoted from Sportsnet’s then-new show because, rumour has it, Gary Bettman couldn’t stand him.

“You always want to work on a program people care about,” Amber says. “This is the one.” But can Hockey Night be again what it once was? It’s in our nature to raze what others have built to create something grander. It’s not until the old monuments are gone that we realize what we’ve done.

Amber knows that for Hockey Night to win back the viewers it lost, he needs to appeal not just to all those who disliked Strombo, but to the casual viewers whose fondest memories of the game are of Peter Puck and the smell of burnt popcorn, cigarette smoke, and cheap cologne that used to waft through the rafters of Maple Leaf Gardens and the Montreal Forum. Those are Amber’s memories, too, along with the connection he felt to the show when it was small and everyone seemed to be watching.

“I’m excited to see if this is for a long haul,” he says, seated next to the spot on set where Strombo used to give his opening welcome. “I hope not to be ushered out.”

* An earlier version of this article incorrectly stated that the senior vice-president for hockey production at Sportsnet was fired on April 5, 2015.

Brett Popplewell is an author, an assistant professor of journalism at Carleton University, and a former reporter for the Toronto Star. His writing has appeared in Bloomberg Businessweek, the Globe and Mail, and The Best American Sports Writing.
Derek Shapton