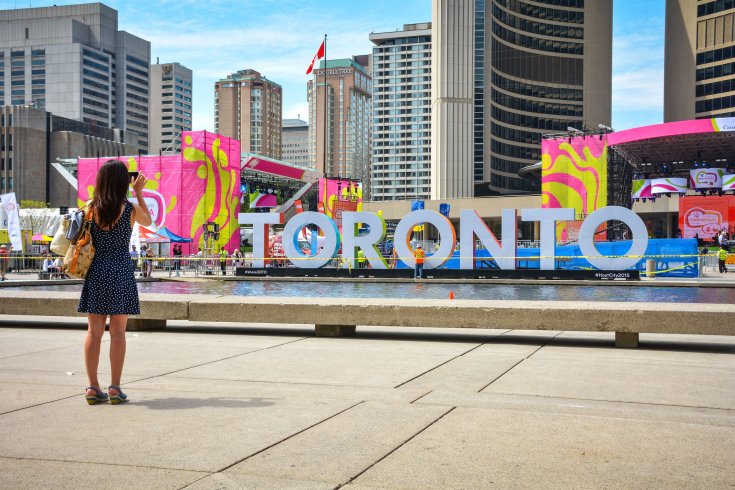 For those of you without young daughters, here is a plot synopsis of just about every newly released girl-targeted movie available for download: Young Stacey is a fantastic gymnast (or swimmer or dancer or surfer) with a bright competitive future—until a sudden injury derails her plans, just months before nationals. Stacey is tempted to give up, but she perseveres thanks to a supportive coach and family. She also survives subplots involving catty competitors who, in a final scene, let their mean-girl mask fall away as they graciously acknowledge Stacey’s winning spirit.

Because I have three girls, I’ve seen this movie a hundred times. It’s what we watch at my house instead of baseball or hockey.

This month, for the first time, my children will be watching this sporting drama play out in the flesh at the Pan Am Games in Toronto. A month ago, I showed them the catalogue of events, and they excitedly picked out eleven they wanted to see—foremost among them swimming, track and field, volleyball, soccer, trampoline, gymnastics, and basketball. For my family, this will be a Pan Am summer.

I broke the bank on tickets, but it’s worth it. Like a lot of fathers, I often worry about my daughters’ attitude toward their bodies. My eldest is in grade five, and I already see her classmates fretting about weight, fashion, and the attention of boys—obsessions that push them to view themselves in purely aesthetic terms. But the movies my children watch, like the Pan Am events they’ll be attending over the next two weeks, send the opposite message: that the female body should instead be thought of as an athletic machine. Once girls take in that core message, a thousand other lessons about eating right, getting enough sleep, and respecting yourself become easier to assimilate.

Boys already get a similar message from the baseball and hockey they see on TV. But it’s different for girls, because most of their favourite leotard-and-track-suit sports are treated as obscurities. The Pan Am Games (like the Olympics) present an exception to that rule. It’s my daughters’ Super Bowl. And the fact that it’s taking place in our own backyard is a big deal.

But you wouldn’t know that from the shockingly grouchy way Torontonians are reacting to the games. “In an Indifferent Toronto, the Pan-Am Games Land With a Thud,” was the headline the New York Times put on its synopsis. Among many of my friends and colleagues, the dominant concern has been the games’ effect on traffic. Former Toronto mayor Rob Ford, who always can be counted on to channel the basest and most idiotic reflexes of John Q. Public, proudly declared that he flouts the carpooling-lane rules implemented during Pan Am. He also said he will boycott the competitions themselves because of the expenses incurred by the organizers. Indeed, the idea that organizers have spent lavishly on themselves has become a cliché of tabloid reporting in recent months—never mind that there isn’t the slightest indication of any sort of corruption, and all the relevant expense documents are posted online.

As for the common complaint that ticket sales have been underwhelming, it’s worth reminding people that the 850,000 sold so far already represent more than the tally four years ago in Mexico, despite the fact that we’re only a third through the games. In fact, I couldn’t even get any tickets for two of the sports my girls coveted: BMX and horse jumping.

The widespread sourness in the face of the games is not an isolated phenomenon, but in fact reflects a larger attitude in Canada’s largest city. During my seventeen years as a resident, I’ve listened to people grouse about how this is one of the only large, wealthy cities that does not have fast, reliable train service from downtown to its major airport. Yet as Chris Selley noted last year, when the city actually set out to build the rail service everyone agreed we needed, all the media wanted to do was complain about the details. An NDP MP even decried it as “Cadillac service that most people aren’t going to be able to use”—despite the fact that a ticket costs a third the price of a comparable taxi ride.

When the UP Express line from Union Station downtown to Pearson International Airport actually began operation last month, offering door-to-door, WiFi-enabled service in just twenty-five minutes, barely anyone even noticed. By this time, they were too busy complaining about Pan Am road closures. And when the games have packed up, the same people will be carping about elitism at the Toronto International Film Festival—which the Toronto Star last year complained was no longer a “people’s festival” because of all the legions of stars and grandeur.

“Be careful what you want in life, you may get it,” is what therapists and career counselors tell clients. And what is true for individuals is also true for municipalities. Since I can remember, Toronto has longed for inclusion in the select club of “world-class” cities. Well, we’ve arrived. No less an authority than the Economist Intelligence Unit has even proclaimed Toronto the world’s best city to live in. Our festivals and sports teams attract millions of visitors. New $400-a-night hotels have popped up like mushrooms. Wealthy Russian and Chinese investors are buying up properties. Expanding armadas of exotic cars prowl up and down the Yorkville strip. And if we bid for the 2024 Summer Olympics, as some are urging, we’ll probably get that, too: among Toronto’s qualities is its Canadian reputation for integrity and good order—especially important given the selection scandals that have unfolded at FIFA recently. Toronto isn’t quite London or New York—but it’s closer to that exalted status than former generations of city boosters ever dreamed possible.

Yet none of this seems to have brought Torontonians much pleasure. Instead, every new triumph gets flipped around to become a source of angst and sour complaint. There are too many people. Traffic is bad. Everything is expensive. Life is crappy.

We wanted the world to beat a path to Toronto’s doorstep. But as soon as the world showed up, all we did was kvetch. It’s the one event in which Toronto always takes the gold.