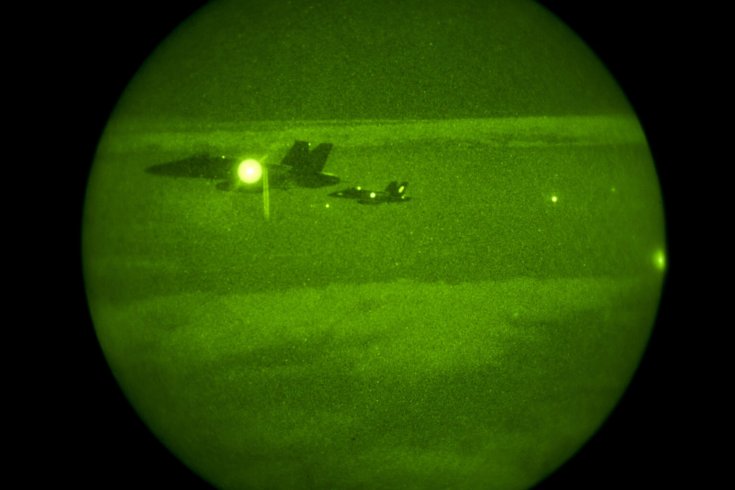 CF-18s from Air Task Force-Iraq refuel during a 2014 combat mission.

For more than a year, Canadian CF-18s have been striking ISIS targets with laser-guided bombs and air-to-ground missiles. Airstrikes began in Iraq in November 2014, but the Conservatives voted to expand the fight into Syria last March. In total, Operation Impact has conducted 1,750 sorties so far. The Liberals made an election promise to end Canada’s bombing campaign early, arguing that we should send personnel to train local troops instead. But this past Friday, terrorists attacked Paris, killing 132 people and injuring hundreds more. There has since been discussion in Europe and the US about invoking Article 5 of the North Atlantic Treaty—the article that enshrines “collective defense,” where an attack against one ally is considered an attack on them all. But does a terrorist incident qualify as an “attack,” and could Canada be forced into escalating a war against its will?

The North Atlantic Treaty Organization (NATO) was founded on April 4, 1949 to combat the expanding Soviet Union. At the time, countries throughout Europe saw the Soviet Union as a threat to their sovereignty—the previous year had seen a coup in Czechoslovakia, civil war in Greece, and an attempt to starve West Berlin into submission. Article 5 was meant to give the agreement teeth. Especially for smaller, weaker countries, a military alliance with the United States promised protection from marauding communists within and without.

But the Cold War eventually thawed out. The first and only country to ever invoke Article 5 is none other than the United States, following the 9/11 terrorist attacks. In response, NATO scrambled the jets and began Operation Eagle Assist. Crew from thirteen countries flew 360 surveillance missions over US airspace, patrolling the skies for eight months. Some of NATO’s naval forces were also sent to the Mediterranean to fight terrorism—an operation that has lasted almost fifteen years and is still going on to this day. Canada sent soldiers to Afghanistan as part of the NATO-led International Security Assistance Force, but Article 5 did not compel them to do so.

That’s because Article 5, despite its impressive rhetoric, can’t really compel anyone to do anything. The wording is deliberately vague. Though many today associate the US with bloated battles in exotic locales, it once shunned all conflicts beyond its borders; the stars and stripes arrived late to both the First and Second World Wars. According to their constitution, only Congress can actually declare war, and politicians in 1949 were justifiably concerned that a mutual-defence treaty could draw them into a fight they didn’t pick—over the previous fifty years, Europe had developed a habit of spontaneously exploding into armed conflict. So when it came time to negotiate, the US insisted that collective defence did not mean an automatic declaration of war. Instead, each country would assist with “such action as it deem[ed] necessary, including the use of armed force.” The countries that needed the most protection were not in a position to dictate terms, and the terms have not changed since then.

So, what will Canada do if France or another NATO country invokes Article 5? Basically, whatever it wants. Although France is well within its rights to invoke the article—the only precedent for using it is, after all, a terrorist attack—it does not specify any action that must be taken beyond aiding the country in question. Trudeau’s commitment to train local forces, while probably less effective than airstrikes, fulfills Canada’s treaty obligations. Whether it fulfills public opinion remains to be seen.