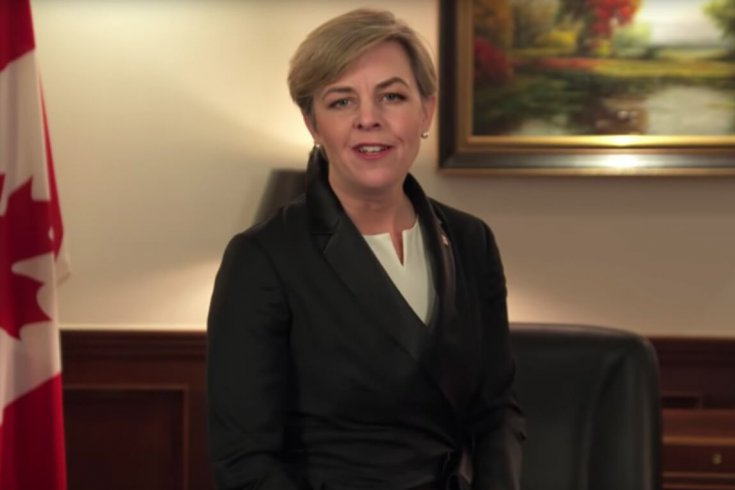 Kellie Leitch for Leader of the Conservative Party

In an undergraduate seminar I’m teaching this term, we’ve been discussing norms, values and identity—a fairly typical set of ideas in political science. I recently wanted to illustrate these concepts, so I asked what I thought was an unremarkable question: “What are Canadian values?” My students responded with an audible groan.

I knew why, of course. Conservative leadership hopeful Kellie Leitch’s proposal to screen immigrants for “Canadian values” has become a political flashpoint. Many see this latest move by Leitch as dog-whistle tactics pandering to xenophobic and Islamophobic tendencies. But Leitch’s Canadian values call has had an additional sort of fallout: we can no longer talk, without rolling our eyes, about what Canadians actually care about.

There is some irony here. Kellie Leitch told CBC reporter Laura Lynch that she “grew up at a dinner table talking about what it meant to be Canadian.” But her very approach has made many other Canadians squeamish about having those same conversations.

In a much-parodied eight-minute video released earlier this month, Leitch defined her vision of Canadian values. Canada provides immigrants with “opportunity,” she says, and with that comes the “responsibility to work hard, and give back to one’s community once one has enjoyed success.” Canada, she continues, “is a place where we can each choose how we wish to live in freedom and tolerance and prosper together.” A better life “is possible here: more prosperous, generous, freer and more tolerant.”

But Leitch goes further, proposing to screen aspiring immigrants for their agreement with her version of Canadian values. She envisions asking questions such as:

“Are men and women equal, and entitled to equal protection under the law?”

“Is it ever ok to coerce or use violence against an individual or a group who disagrees with your views?”

“Do you recognize that to have a good life in Canada you will need to work hard for yourself and your family, and that you can’t expect to have things you want given to you?”

Leitch says that these values are “enshrined in our constitution.” But she’s not quite right. The constitution—and namely the Canadian Charter of Rights and Freedoms, where these sorts of constitutional protections are laid out—is not a collection of values. It is a foundational document guaranteeing a series of rights. These rights may, and probably do, reflect the values of the society at the time, or at least the values to which the country aspired. But rights, meaning protection for citizens from the state and from one another, are not the same thing as values. Values can wax and wane. Rights, on the other hand, are enduring—and may even protect us from fluctuations in societal values.

At the University of Waterloo’s Faculty of Applied Health Sciences, the Canadian Index of Wellbeing has been trying to track the movement of these values scientifically. Through what they describe as extensive consultation with Canadians, the project’s research team has created a list that includes fairness, diversity, equity, inclusion, health, safety, economic security, democracy, and sustainability.

These aren’t wildly different from Leitch’s list, but they have the advantage of being derived inductively, which is to say from the consultations the research team conducted. And this means, too, that they necessarily reflect Canada at a single point in time. Had Canadians been surveyed at the time the Charter was drafted, it’s likely that the term “inclusion” would not have implied LGBTQ inclusiveness in the minds of most Canadians, and it’s likely that the term “sustainability” would not have appeared at all. Had Canadians been surveyed in 1867, a values list would most certainly reveal even more striking differences. What this also means, of course, is that the Canada of decades from now may shift from the values Canadians hold today.

This is both the challenge and opportunity of a country such as Canada, which is a product of immigration. Our country was established atop an existing web of Indigenous Peoples’ own political and communal values and identities. Who we are is subject to constant change and evolution, alongside the process of truth and reconciliation. And while immigration affects our values, newcomers also experience a process of socialization into the existing norms and identities with which we ourselves are grappling.

The last point is what Kellie Leitch misses. Prospective Canadians might “disagree” with a particular Canadian value at this moment in their lives, but it’s likely that their children—or even they themselves—may adapt their view after being socialized into our society. We may stretch and adapt to accommodate new ideas, too. It’s possible our existing values may even gain greater clarity through population flows. Refugees fleeing environmental degradation might bring new insights to bear on sustainability, for example. Immigrants seeking economic opportunities might have additional things to say about the value of economic security.

Understanding the values Canadians hold helps us explain the sources of particular policies and helps citizens identify avenues for policy change. It helps lawmakers pitch legislation that resonates with collective longings, and enables the public to pressure elected officials to comply with societal values. If sustainability is demonstrably important, for example, then Canadians have an additional peg on which to hang their fight for environmental responsibility. It also helps us identify areas where state conduct has fallen short and where we want to push for change. Here, some Canadians would say that the current electoral system undermines the principle of fairness. Others would disagree. But at least the debate over electoral reform, if it does re-emerge, can take place against a backdrop of what is most fair. It even helps us know when an apology is necessary, as in the case of residential schools. Given the legacy of trauma, Canadians have begun to ask whether equity is being sufficiently attended to.

Most importantly, talking about national values helps us disentangle policy positions from partisan wrangling. It enables us to assess political debates in light of how well various proposals track with what we really care about. And if segments of Canadians find that their own values conflict with those they see expressed by others, they can begin to have tough conversations that try to reach across the divide. Liberals who fought against the lack of nationwide marriage equality for LGBTQ citizens, for example, had to assuage conservatives that the sanctity of marriage would not be undermined. Part of understanding values, after all, is identifying and working through value conflicts.

The trouble is, we can’t begin to understand how values can be identified or how they change over time—and where existing values like fairness, diversity, or equity properly fit into today’s political debates—until we talk and wrestle with these very concepts.

Leitch says it’s important to talk about values. For her, it seems the discussion is just a vehicle to advance a specific, exclusionary view of immigration. But if we really did address our values, we might actually come to some important realizations about where they come from: namely, diversity. Authentically “Canadian” values spring from various traditions; history is full of key moments in which individuals and groups succeeded at spotlighting new collective needs and obligations. They have changed how we think about everything from littering to gender equity.

Sadly, the most vocal proponent of conducting a conversation about Canadian values—one we desperately need to have—has sucked the life right out of the dialogue, even before it’s begun.

Mira Sucharov is associate professor of political science at Carleton University, and a member of The Walrus's editorial review committee.