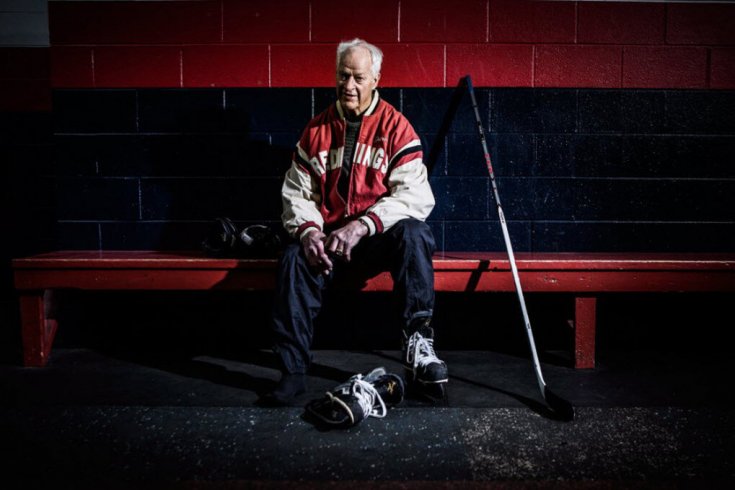 When pundits challenge each other over the greatest hockey player of all time, three names immediately emerge: Wayne Gretzky, Bobby Orr and Gordie Howe. There is a case to be made for all three, as each changed the game in which they excelled. But if you quiz Gretzky or Orr, both would say without hesitation that Gordie Howe is the best ever, hands-down.

The last time I saw Gordie Howe in person, it tore the heart from my chest. It was at the 2011 Hockey Hall of Fame Induction, and that year, his son Mark had been selected as one of the newest honoured members. But during the evening, Gordie, alone and clearly confused, approached my wife and asked, “Where am I? Where do I go?” It was evident that his memory was failing, and he was quite agitated. Calmly, my wife took him by the arm, explained that we were at the Hockey Hall of Fame and she proceeded to lead him to his family and friends.

It is painful to see heroes fall. In Gordie Howe’s case, it was dementia followed by a series of strokes that finally slowed this giant of the hockey world. No mortal had been able to do that through twenty-six seasons in the National Hockey League and seven more in the rival World Hockey Association.

In his prime, when the big, slope-shouldered right winger removed his equipment, his torso looked like it was carved from granite. He used his size and strength to bulldoze through opposition. If Gordie went into the corner to battle an opponent for possession of the puck, it was certain that he would emerge with it on his stick. Although not the swiftest of skaters, his muscular legs pumped like pistons as he drove over the blue line and unleashed a lethal shot from those powerful wrists he possessed. And he also had a mean streak—he’d use his stick when he had to and his elbows became legendary. He seldom got angry, but cross him and the gloves would come off. But just once. No player ever fought him twice.

Debuting with the Detroit Red Wings in 1946-47, Howe rode his sheer strength, his extraordinary talent, his indomitable perseverance and, yes, those legendary elbows, through the Wings’ early dynasty in which they finished first seven consecutive times and claimed the Stanley Cup on four occasions. Howe led the NHL in scoring six times through his career, and was the top goal scorer five times. He was selected as the NHL’s most valuable player on six occasions. Want an example of consistency? Howe finished top five in NHL scoring in twenty consecutive seasons.

More important than his statistics, Gordie Howe was, without question, the game’s greatest ambassador for seven decades.

At the end of the 1970-71 season, Howe retired, citing arthritis in the wrists that had engineered so much success through the years. In 1972, he was inducted into the Hockey Hall of Fame, the requisite waiting period waived for this giant of the game. But his career didn’t end there. Already retired for two seasons, the World Hockey Association came calling, and gave him a unique opportunity. In October 1973, Gordie returned to the game in order to pull off the sensational feat of playing professional hockey with his sons, Mark and Marty. The three led the Houston Aeros to two Avco Cup championships, with Gordie twice reaching the 100-point plateau. In 1977-78, the trio shifted to the New England Whalers for two more seasons. And when the WHA came to the end of its existence after the 1978-79 season, four teams were absorbed into the NHL. One was the New England Whalers, who joined the NHL as the Hartford Whalers with Gordie Howe playing right wing for a season. He was fifty-one years old, and still scored fifteen goals.

During his career, Gordie Howe demolished scoring records. Long before the term “power forward” had been coined, he was the template for the role. Howe would beat you in every way a hockey player can be beaten—through scoring (he could shoot right- or left-handed), through his stickhandling, by battling in the corner (with or without using his legendary elbows), or he could beat you with his fists. Hockey fans often measure a player’s worth by counting the number of “Gordie Howe Hat Tricks” they collect—scoring a goal, adding an assist and earning a fighting major all in the same game.

But there is one thing more important than statistics that elevated Gordie Howe to his iconic status. He was, without question, the game’s greatest ambassador for seven decades. The “aw shucks” farm-boy persona from his Saskatchewan upbringing never abandoned him. His shy and modest off-ice personality belied the superstar of the ice lanes. As tough as he was on the ice, he was equally gentle off.

After the Toronto Maple Leafs defeated the Red Wings for the Stanley Cup in 1963 and ’64, Gordie Howe was the sole Red Wing who made his way to the Leafs dressing room to congratulate the victors. He never failed to stop to give a fan an autograph, to have his picture taken with them (usually with his elbow raised near the fan’s grinning mouth), or to share a story about “the good old days.” Even if it inconvenienced him, his family or his teammates, Gordie considered his off-ice actions as part of the job; they were as important to him and the game as scoring goals.

Usually, the spotlight dims once an athlete leaves the game, but for Howe, it never did. Children, generations removed from Howe’s playing days, dutifully lined up to collect his immaculate signature, a joke, and a pat on the head. No matter your age, everyone felt special in Howe’s presence.

Gordie Howe remained our hero through all of his eighty-eight years. He steadfastly remained beside his wife Colleen while she battled Pick’s disease, a rare form of progressive dementia. Gordie, too, was diagnosed with dementia later in his life. And in October 2014, fans, both passive and passionate, were devastated to learn that Gordie Howe had suffered a major stroke. Although his son Murray, a doctor, stated, “I feel like this is his final lap around the rink,” we clung to the belief that he would beat this setback like he did every challenge he had faced in hockey. In a playoff game against Toronto in March 1950, Howe suffered a skull fracture that seemed certain to end his life, and if not, certainly his career. Although last rites were administered at the time, Howe survived, and the following season, led the NHL in both goals and in points, collecting twenty more than second-place Maurice Richard. To his legions of supporters, Gordie Howe seemed to be immortal. Experimental stem cell transplants gave Howe a reprieve, and while we were astonished, we cheered for the overtime period he was granted.

Our heroes seem impervious to the plights of mere mortals, but finally, health issues did what no opponent could ever do. 2016 has been an annus horribilis for our heroes: David Bowie, Prince, Muhammad Ali. On the morning of June 10, we added one more—Gordie Howe.

He was adored. He will always be “Mr. Hockey.”

Kevin Shea is a hockey historian and the author of fourteen books.