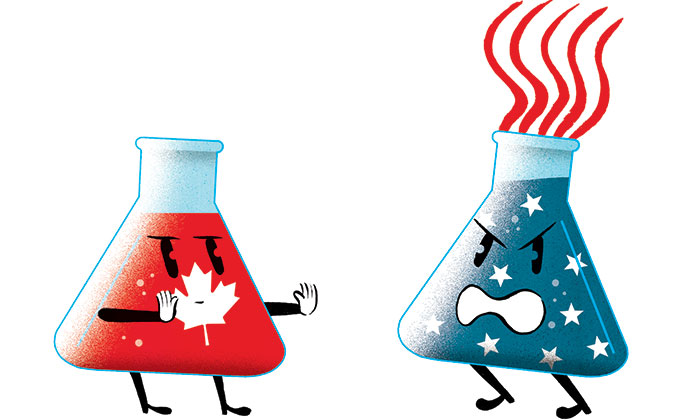 However much we may admire the United States, there are American practices Canadians choose not to emulate. No recent event illustrates the point more clearly than the shooting of a black teenager in a gated community in Sanford, Florida. On a rainy night in February, George Zimmerman, a Neighborhood Watch volunteer who had a licence to carry a gun, noticed Trayvon Martin leaving a local convenience store. Zimmerman called 911 and, against a dispatcher’s advice, began following Martin, who he suspected was “up to no good.” What happened next is in dispute, but Zimmerman claims that Martin attacked him and he shot the unarmed boy in self-defence. Had the killing occurred anywhere else, the police might have brought charges, but Florida’s so-called Stand Your Ground law gives the benefit of the doubt to a person who claims self-defence, even if the shooting takes place outside his or her home. (States with similar laws—almost half of the Union and growing—limit their jurisdiction to an individual’s residence or vehicle.) And that is why Zimmerman was released without charges.

Not surprisingly, the incident ignited a racially charged firestorm in the US. Florida governor Rick Scott appointed a special prosecutor to determine whether or not the police acted appropriately. The US Department of Justice intends to launch its own investigation. President Barack Obama, who might have been expected to steer clear of the controversy in an election year, spoke publicly about the shooting’s effect on him, saying, “If I had a son, he’d look like Trayvon.” Former president Bill Clinton called for a reappraisal of the country’s Stand Your Ground laws, because “[they are] going to create real problems.” Florida’s already has; the number of “justified” killings in the state has almost tripled, from thirteen a year on average to thirty-six, since its permissive law was passed in 2005.

In the end, Florida’s special prosecutor charged Zimmerman with second-degree murder. But what’s striking about the story from a Canadian perspective is the knowledge that it couldn’t have happened here. Not that we are without blindspots of our own—the Robert Pickton killings in Vancouver come to mind—but a Stand Your Ground law would be inconceivable in Canada, as would the existence of armed crime watch volunteers.

The same could have been said, once upon a time, about attack ads. Political mudslinging is as American as fried chicken and as old as the Republic itself, although it wasn’t until television came along that it became commonplace. Campaigning against Barry Goldwater in 1964, Lyndon Johnson ran an ad that showed a young girl picking the petals off a daisy while an off-camera voice counted down—”Five, four, three, two…”—to a nuclear explosion. The message was clear: a vote for the hawkish Goldwater was a vote for nuclear war. The ad helped Johnson reclaim the White House. In 2004, Democratic presidential candidate John Kerry went down to defeat when the Republicans ran commercials in which swift boat veterans called him a liar (swift boats were a class of navy vessel used during the Vietnam War). “Swift-boating” has since become a euphemism for attacking a political opponent with negative ads. And while television remains the attack advertiser’s medium of choice, as we will see in the months leading up to the US election in November, the Internet—which is not only unregulated, but also cheaper and more accessible—is gaining ground, giving rise to an even nastier political climate.

Canadian politicians are not without sin (remember Kim Campbell’s ill-advised ad mocking Jean Chrétien’s Bell’s palsy?), but they have tended to exercise more restraint when it comes to political muggings. In Canada, attack ads have been the exception to the rule; this used to distinguish our politics from theirs. But no more. In recent years, Stephen Harper’s Conservative Party has spent millions on negative advertising—and, going the Americans one better, not just during election campaigns; the Tories ran ads attacking Liberal leaders Stéphane Dion and Michael Ignatieff before writs were even dropped. And now they’re at it again. In March, with three years until the next scheduled election, they launched an ad assailing interim Liberal leader Bob Rae on his economic record as premier of Ontario. It claims that Rae turned Ontario into “the welfare capital of Canada,” and ends with an off-camera voice asking, “If he couldn’t run a province, why does he think he can run Canada?” Rae is shown chuckling—smugly, we are to believe—in the background.

The ad is as vicious as it was uncalled for, but as Tory senator Doug Finley told an interviewer, “Politics is an adversarial business.” And besides, he might have added, negative campaigns work. Dion and Ignatieff never recovered from ads that claimed the former was unfit to lead and the latter interested only in himself. But is efficacy the only standard by which we measure political behaviour? Attack ads may work, but are they morally justifiable? This is not the United States, Mr. Harper. In the future—and in the interests of civil discourse—let’s play by our rules, not theirs.

John Macfarlane is the editor and co-publisher of The Walrus.
Ryan Snook

Ryan Snook is a Toronto artist whose work has appeared in the Village Voice, the Wall Street Journal, and the Washington Post.