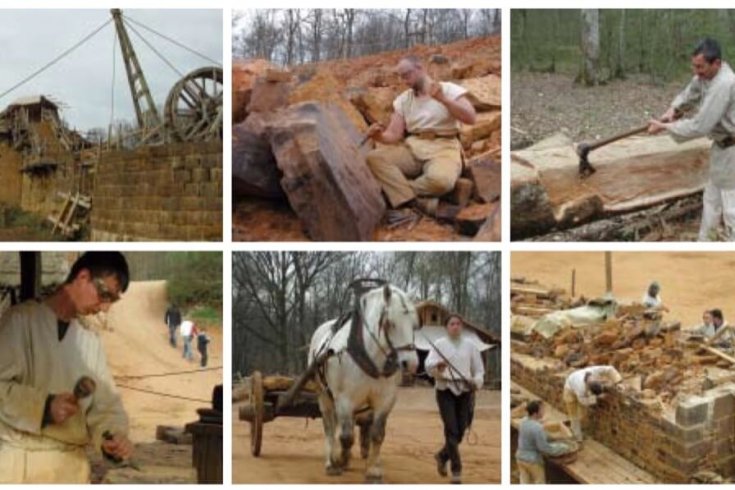 series of images with horse-drawn animals

It’s Monday morning, April 4, 2005. A crew of workers, mostly French, arrives at an ordinary forest clearing in Burgundy, three hours southeast of Paris. Their tunics stained ochre from previous days’ labour, they toss back a few espressos in plastic cups. Then, in a sort of shared anachronistic reverie, they tramp off to the Middle Ages.

On a thirteenth-century construction site, you wouldn’t have seen any of the following items: sneakers, T-shirts, watches, calculators, trucks, power tools, boom boxes, or engines of any kind (except siege engines, perhaps). Nor will they be found here, at Guédelon, where thirty-five craftspeople are recreating a medieval castle without modern technology, one hand-hewn stone at a time. The requirements for this kind of work are as simple now as they were then: a pale peasant’s smock and trousers (no loud colours, please), a willingness to work hard, and, oh, two or three decades of your life.

“To work here, you have to forget,” says stonecutter Clément Guérard, a seven-year veteran of the project. With a flint and tinderbox, he lights a hand-rolled cigarette—one of the few modern amenities permitted on the job (walkie-talkies, steel-toed boots, and protective eyewear are also allowed). Then he goes back to whacking away at a purplish, breadbox-sized stone with a hammer and chisel. On average, he finishes three blocks a day.

Guédelon is the brainchild of Michel Guyot, a former riding instructor from the province of Berry in France. Inspired by a similar scheme to construct an eighteenth-century frigate in Rochefort, Guyot began work on this dream in 1995. He found the ideal location for his fortress, a 6.9-hectare abandoned quarry just outside the village of Treigny, and hired castle experts to draw up the plans. After assembling administrative staff, a foreman, and labourers, and raising the necessary start-up funds, he broke ground in 1997.

“When you love old buildings, cath-edrals, you ask yourself, how is this done?” says Guyot, fifty-eight, whose passion for castles ( he already owns four that he restored himself ) developed in adolescence. He was not interested merely in reconstructing the castle, but in creating an experimental medieval work site to rediscover ancient building techniques, such as the best recipe for a durable mortar, or the best angle, shape, and size for arrow loops.

The medieval construction site is entering its ninth year of a projected twenty-five, give or take a few years. There’s no strict deadline. Nor should there be. On first sight, you could be forgiven for thinking that Guédelon’s half-built stone walls and towers, rising from a wide moat cluttered with rock, are long-forgotten ruins being unearthed by archaeologists. Covered in moss and mould, the ferruginous sandstone appears to have been in place for centuries.

One imagines that a castle construction site in the Middle Ages would have been swarming with serfs and cluttered with equipment, but Guédelon is relatively calm and pristine: some wooden scaffolding affixed to the fortifications, a horse cart hauling rock, and workers far outnumbered by visitors. The project’s modest goals for 2005 are to add thirty steps to the spiral staircase, finish the vaulted ceiling in the main tower’s cellar, and raise the wall of the logis ( great hall ) another three metres. Progress happens when it happens, guided by the precept that the medieval way is the best way.

The medieval way is something of a mystery, though. “At the beginning, we didn’t know the best methods,” Guyot says. To figure it out, he and site supervisor Florian Renucci have made several fact-finding trips to nearby ruins, where they looked at design features, analyzed building materials, and mused about which techniques might suit their own castle.

Though entirely original, Guédelon’s design is based on period Burgundian fortifications set forth by Philippe Auguste, king of France, in the twelfth and thirteenth centuries. The king emphasized function over form, eschewing decorative embellishments in favour of battle-friendly features. Guédelon is thus shaped as a quadrangle, protected by courtines (curtain walls), and surrounded by a moat. At the corners stand four main towers; these and the two gatehouses are topped with conical roofs. Exact reproduction of Philippe’s fortifications is impossible, of course. That’s because few historical records detail the method for, say, constructing merlons and machicolations. For Gué-delon’s stonecutters, masons, woodworkers, carpenters, blacksmiths, rope makers, and basket weavers, on-the-job training is de rigueur, and the ability to improvise, experiment, and fall headlong into faith is crucial.

Contributing to the project’s overall sense of authenticity is the natural site, which provides workers with most every material they need: water, rock, earth, and wood. Tools and nails are hammered out in the forge. There are no cranes: if stones need to be hoisted to the top of the main tower (which will one day rise to thirty metres), a mighty worker walks inside a huge wheel, or “squirrel cage,” to lift them. And when Renucci needs to explain an idea to his head mason, he simply scratches a diagram into the hard-packed Burgundian dirt.

In the medieval hamlet adjacent to the castle, Diana Hajdu, a former lawyer from Paris, is busy making hundreds of decorative clay tiles in preparation for the day a decade from now when the castle’s floors will be finished. The eight years she’s put in thus far may one day come to naught, as the kiln she will use to perfect her firing technique has yet to be built. She has no idea if her tiles will withstand thousands of footfalls, but she keeps pressing clay into her moulds, undeterred. When she’s finished with the floor, another 78,000 tiles will be required for the roof.

Many of the site’s full-time workers have pledged decades to the project, but they haven’t come on board simply because they believe in Guyot’s vision: Guédelon is their employer, and they are paid salaries and receive benefits. Administrative director Maryline Martin says that 90 percent of the workers are not skilled labourers, but “intellectuals.” Guédelon lets them work on something larger than themselves—even if some may not see the castle completed during their lifetimes.

Last year 220,000 visitors stopped by to see workers harvesting oaks and shaping them into beams, or splitting massive rock slabs into manageable chunks, which stonecutters custom-chisel into blocks for masons, who then assemble walls like elaborate jigsaw puzzles.

“It’s not a museum,” says Renucci. “You don’t push buttons or see a film. Here it’s direct interaction between the public and the workers.” At six to eight euros a pop, tourism keeps the venture in the black, but it also invites some grumbling from purists. “Some critics call it Disney, fake,” Martin frets, “because we make money and are open to the public.”

Unlike the Realm of the Mouse, though, Guédelon is no phony fantasyland. Inhale the smoke, stir the mortar, absorb the utter silence save chisel blows ringing into stone: the primal smells, textures, and sounds of Guédelon convincingly evoke another era. Every corbel, lintel, and murder hole will be in working order, and, in the unlikely event of an attack, a defending soldier will be able to retreat up the spiral staircase (designed to thwart right-handed attackers), raise the wooden drawbridge, or sneak out the postern for a midnight sortie.

But then, utility isn’t really the point. A castle could be built more efficiently with backhoes and pneumatic drills, but that would only mirror the twenty-first century, not open a window to the thirteenth. What drives the dream is not the finished product, but the process. “It will be less interesting once it’s done,” Guyot laments.

Back at the castle, another day of chipping rock, hewing beams, and forming tiles has ended. At 6 p.m.—quitting time—a worker blows a horn. Tomorrow, Tuesday, April 5 , 2005 , will be much the same as today, as will April 5 , 2006, and April 5 , 2016. But no one seems discouraged. When a visitor asks about the day’s progress, one of the masons raises his hands, measures a space in the air about a foot high, and calls out excitedly, “Tell the world we did this much today!”