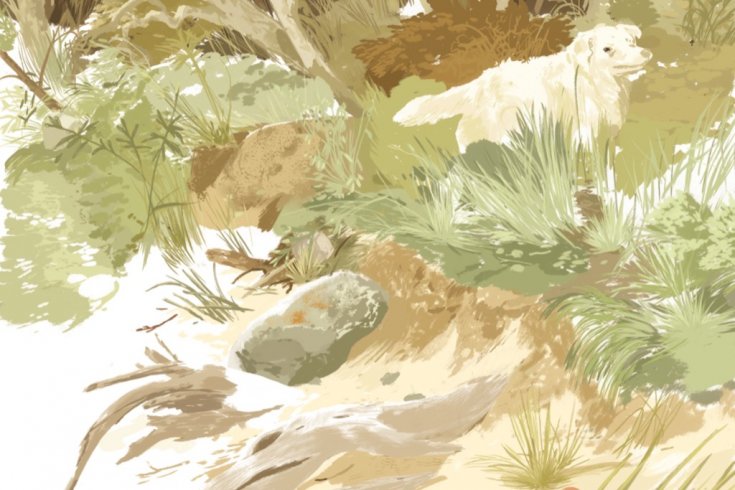 When Grace first got Victor she and Joe walked him on the beach most Sundays. Then a chow chow bit some kid and the parks department restricted dogs to the slough behind the dunes. Grace took Victor there for years, and after she died Joe stepped in and maintained the custom, though he hated it back there. Mushy trail hedged with poison oak. Baking flats of cracked mud broken by patches of scrub. The dunes stifled the sea breeze, leaving the air still and rank and seething with insects.

But Victor came alive here in spite of himself. At home he slept and grieved, but grief could not deaden the scent of fallow deer and porcupine, of rabbits and rats and the little grey foxes that ate them. Dogs were supposed to be kept on the leash for the sake of the wildlife, but Grace had always left Victor free to follow his nose and now Joe couldn’t bring himself to rein him in. Anyway Victor was too creaky and cloudy-eyed to chase anything; if he did catch some movement in the brush he’d lean forward and maybe raise a paw, just to keep his dignity — Eh? That’s right, run along there! — and then go back to smelling things. Joe didn’t hurry him. He lingered, waving away the mosquitoes and flies that swarmed around his head, until the hint of some new fragrance pulled Victor farther along the trail.

Victor was drawn to the obvious delights — putrefying carcasses, the regurgitations of hawks and owls — but he could just as easily get worked up over a clump of shrubbery that seemed no different than the one beside it. He had his nose stuck deep in swamp grass one damp morning when Joe saw a dog emerge from the low-hanging mist farther up the trail. It was a barrel-chested dog with a short brindle coat and a blunt pink snout, twice Victor’s size, as big as a lab but of no breed familiar to Joe. When it caught sight of Victor it stopped for a moment, then advanced on stiffened legs.

Victor looked up from the grass. As the dog drew near he took a step in its direction, head craned forward, blinking like a mole. Huh? Huh? Who’s there? Somebody there? Joe took him by the collar. Beat it! he said. Go away.

Go! Joe shouted again. But the dog came on, slowly now, almost mincing, with an unblinking intentness. It kept its yellow eyes on Victor and ignored Joe altogether. Joe stepped in front of Victor, to break the dog’s gaze and force himself on its attention, but instead it left the trail and began to circle around him, eyes still fixed on Victor. Joe moved to stay between them. He put his free hand out, palm facing the dog. Victor gave a grumble and strained forward against his collar. The dog came closer. It was too close, too intent, it seemed to be gathering itself. Joe reached down and scooped Victor up and turned his back on the dog. He rarely had occasion to lift Victor and was always surprised at his lightness. Victor lay still for a moment, then began to struggle as the dog moved around to face them. Go away, damn you, Joe said.

Bella! Whoa, Bella. A man’s voice: deep, gravelly. Joe looked up the trail and saw him coming, shaved head, wraparound sunglasses, bare arms sticking out of a leather vest. He was taking his sweet time. The dog continued to circle Joe. Victor complained and squirmed impatiently, Put me down, put me down.

Get that dog away from us, Joe said.

Bella? He won’t hurt you.

If he touches my dog I’ll kill him.

Whoa, Bella. The man sauntered up behind the dog and took a leash from his back pocket. He reached for the dog but it dodged him and cut back in front of Joe, keeping Victor in view.

Shame, Bella! Shame on you. Come back here — right now! The man put his hands on his hips and stared at the dog. His arms were thick and covered with tattoos, and more tattoos rose up his neck like vines. His chest was bare and pale under the open vest. Beads of sweat glistened on the top of his head.

Get control of that dog, Joe said. He turned again, Victor still fidgeting in his arms, the dog following.

He just wants to make friends, the man said. He waited until the dog’s orbit brought him closer, then made a lunge and caught him by the collar. Bad Bella! he said, snapping on the leash. You just have to be everybody’s friend, don’t you?

Joe set Victor down and leashed him and walked him farther up the trail. His hands were shaking. That dog is a menace, Joe said. Bella. Jesus.

The man looked at Joe through his bubbly black shades. How did he see anything? It was irritating, like the display of his uselessly muscled, illustrated arms. I thought it meant handsome, he said.

What are you, a teacher or something?

The dog suddenly lunged against its leash.

We’re going, Joe said. Keep your dog away from us.

So, are you a teacher?

You shouldn’t have said that about killing Bella. I could sue you, right?

Not really, no. Okay, but still, you didn’t have to get all belligerent. Do you have a card? This friend of mine had his film script totally ripped off by Steven Spielberg.

I don’t do that kind of law.

You should talk to him. Like, D-Day? You know, all those guys on the beach? Exactly the way my friend described it. Exactly.

D-Day happened, Joe said. Your friend didn’t make it up.

Okay, sure. But still.

Anyway, that movie was years ago.

So you’re saying statute of limitations?

The opening notes of “Ode to Joy” shrilled out. Hang on, the man said. He took a cellphone from his pocket and greeted the caller. Hey, he said, lemme call you back, I’m in kind of a legal conference here.

No! Joe said. No, you can talk. Just please keep Bella on the leash, okay?

The man gave the thumbs-up and Joe led Victor away, up into the mist the other two had come out of. Right away his skin felt clammy. The bugs were loud around his ears. He was still shaking.

Victor stopped to squeeze out a few turds. He looked up at Joe. My saviour. I guess I should be panting with gratitude. Licking your hand.

I’ll kill him if he touches my dog. What devotion! Almost canine. Victor finished and made a show of kicking back some dirt. He raised his head and tested the air like a connoisseur before starting up the trail, feathery tail aloft. I could’ve handled him.

Maybe so. He wasn’t going to do anything. Anyway, since when do you care? It’s not like you even wanted me. If it hadn’t been for Grace, those guys at the pound would’ve killed me.

It wasn’t you I didn’t want — you in particular. I just wasn’t ready for a dog.

I guess not. The way you carried on when Grace brought me home. What a brat.

our little conditions for keeping me. I was her dog. All the feeding, all the walking, picking up poop, baths, trips to the vet, arrangements with the kennel when you went out of town — her responsibility.

Her dog, her job to keep me out of the living room, out of the study, off the couch, off the bed, off the Persian rug. No barking, even when someone came right past the house — right up to the door!

And when they kicked us dogs off the beach, remember that? No way you were going to get stuck back here. No, Grace had to walk me in the swamp while you walked along the ocean. I hope you enjoyed it.

I didn’t. I felt mean and ridiculous.

But you made your point! Her dog, her responsibility. You let her walk me in the rain once when she had a cold.

Then you should’ve insisted more.

Not like me. Did I ever bark at her?

You did. And she barked back. We disagreed sometimes. All couples do.

You ignored her. She would call your name and you would go on reading your paper, or watching TV, and pretend you hadn’t heard. Did she ever have to call my name twice? No! Once and I’d be there, ready for anything. Did I ever want another mistress?

You did. You looked at them in the park, on the beach, in other cars as we drove around.

Men do that. It didn’t mean I wanted anyone but Grace.

Yes you did. Maybe for an hour. For a night. No longer.

You had no choice. You can’t be selfish. But we men! — it’s a wonder we forget ourselves long enough to read a book or buy a birthday card. As for love . . . we can love, but we’re always forgetting.

That’s true. But then you missed out on being forgiven. You never knew how it feels to be welcomed home after you’ve wandered off. We’re lost without it . . . forgiveness. Can’t do it for ourselves. Can’t take ourselves back in.

I never wandered off.

No. You’re a good dog. You always were.

Victor left the trail to inspect a heap of dirt thrown up by some tunnelling creature. He yanked at the leash in his excitement. Joe unclipped him and waited as Victor circled the mound, sniffing busily, then stuck his nose in the burrow and began to dig around it. Joe watched him, taking pleasure in the dog’s forgetfulness of everything else. It was Joe’s pleasure, and this is where he found it, Sundays in the bog. He looked up through a haze of insects. A buzzard was making lazy circles high overhead, riding the sea breeze Joe could not feel down here, though he could faintly make out the sounds it carried from beyond the dunes, of crying gulls and crashing waves and the shrieking children who fled before them. Victor panted madly, hearing none of this. He worked fast for an old dog, legs a blur, pawing back jets of black earth. He lifted his dirty face from the hole once to give a hunter’s yelp, then plunged back in.